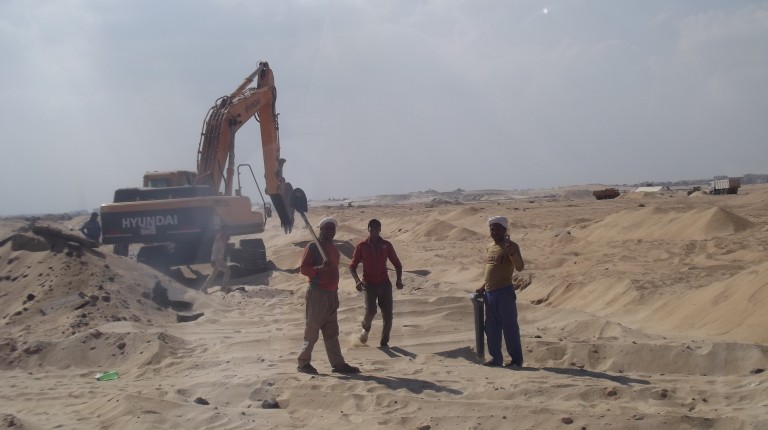 The Egyptian government has done everything within its power to promote its New Suez Canal mega-project to the world, inviting world leaders and foreign investors to witness its inauguration.

Perhaps the country’s most impressive achievement in the project is the speed at which it has been completed. In 1869, the old canal took 100,000 workers a total of 10 years to complete, and many were reported to have lost their lives in the process.

Behind the gigantic work and officials’ presentation of it, over 40,000 workers have spent long days on site, eventually turning sand into water in just 12 months. Most of them were hired by contractors, while only 5,000 came through the Ministry of Manpower.

Work in the canal seems to have had unusual labour conditions, besides the significant presence of the private sector in a national project. Many workers were from the same family, and the canal has apparently provided job opportunities for Sinai citizens.

Two brothers from Al-Arish, Ahmed and Abdel Rahman Al-Ghoul, spoke to Daily News Egypt on their winter journey of hard labour in dry drilling the new canal. When he first moved to the site, 23-year-old Abdul Rahman had just got married and had taken his wife with him to Ismailia.

Maha, his wife, says she was fine there because she was used to the city and had relatives there. “I encourage my husband to travel and seek more work, and I’m happy he took part in this project and hope he does more for the country,” she said.

On the other hand, Abdel Rahman seemed a bit disappointed regarding the reward of his work.

“We worked for 12 hours, five days a week, in tough cold conditions,” he said. “I get paid more working outside the canal, and I work for the same number of days and only eight hours.”

While he was also more expectant of the state, and not just in terms of a bonus from his employer, his brother Ahmed, a 30-year-old father of three, seemed more relieved, although he had spent four months, in comparison to Abdel Rahman who stayed for seven months.

The two worked together on a loader, the elder from 6 am to sunset, then the younger takes over the shift. They both returned to their homes at the end of the week. Before the canal, they worked together in Cairo, and would go home one week out of every three.

Despite all the hardships faced in the desert work, the workers preferred to portray a positive image of the project, boosting their pride as the day to celebrate their efforts approached. This comes despite the lives that were lost, estimated to be between 10 and 15 workers.

The Health Ministry’s numbers also stated that a total of 16,683 workers were medically examined until the end of July 2015. At least 103 workers suffered heat stroke, while another six were bitten by scorpions, the ministry said in a 1 August report.

“When we got sick, all we had to do is visit a makeshift hospital on site,” the Al-Ghoul brothers asserted.

The New Suez Canal project also has other impacts on workers’ lives. For one, 76,535 have applied for the next project, the Suez Canal Axis, according to Ministry of Manpower spokesperson Haitham Saad.

On the other hand, the ongoing inauguration itself has prevented fishermen working in the New Suez Canal project’s waterways from their work, and they are not allowed to return until the end of the week.

“All the fishermen adhered to the decision, as they are familiar with the security measures,” Head of the Fishermen’s Syndicate in Suez, Bakry Abul Hassan, said.

According to engineer Ahmed Zaghlol who worked on the new canal to the end, the New Suez Canal project workers’ stay was secured by the army, which also provided supplies, including food, tents and caravans.

None of the interviewed workers said they received any reward from the state. Ahmed said they were supported emotionally and materially by VIP visitors to the project site, who regularly toured the canal.

The actual government presence was less obvious, but the Ministry of Manpower had an office on site. Magdy El-Badawy, vice-president of the state-affiliated Trade Union Federation, admitted that his knowledge of and interaction with the canal’s workers was limited.

“Nearly 41,000 workers were there, the majority were hired through the private sector. Moreover, labour for the project was left to the free market’s supply and demand, and the usual corporate conflicts were minimised so we did not receive major complaints,” El-Badawy said.

The Al-Ghoul brothers confirmed the claims by stating that if they had faced any problems, they would simply have worked for another contractor.

Hakim, a truck driver from Sohag, said he was “putting the final touches” before the launch. Daily News Egypt was unable to find NGOs following up on the situation of the workers’ rights.

Their representation in the media was limited to the first couple of months and the last few days. However, photojournalist Hany Abdel Rahman, Al-Masry Al-Youm’s office director in Ismailia, has launched a website documenting the entire work of the project, with 8,000 exclusive videos and 250,000 photos.

Among the interesting stories shared, a worker who participated in the 1973 war on Israel, said he “went back to the project site to witness how the same place he stood in 42 years ago, would come to change”.