Leading business research company Dcode Economic and Financial Consultancy has conducted a study to examine the significance of the new Suez Canal project to the economy.

Suez Canal receipts represent a key source of foreign currency in Egypt; whereby it reached $5.4bn in FY 2013/14. The relative importance of the Canal increased as other key foreign currency generating activities, like FDIs and tourism, faltered post 2011 and 2013 revolutions (See Chart 1). 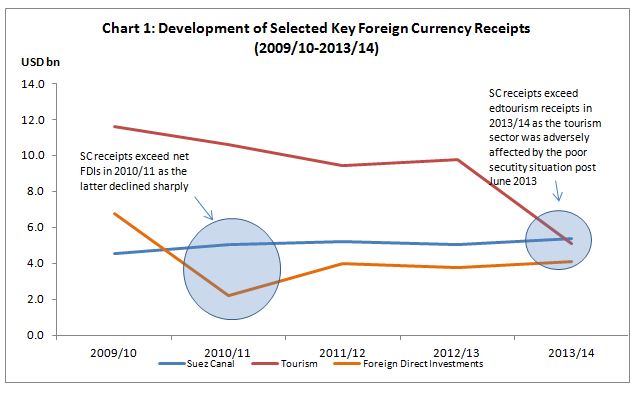 How has traffic through the Suez Canal been evolving since 1975?

Average daily traffic, in terms of number of vessels and net tonnage, increased steadily between 2002 and 2008, associated with a pickup in global economic growth and world trade. The global economic downturn, however, led to a significant decline in traffic in 2009. Interestingly, the average daily tonnage increased 31% between 2009 and 2014, while the average daily number of vessels decreased marginally by 0.4% over the same period. This is explained by a significant increase in the average tonnage per vessel post 2009 as exhibited in Chart 3 as the international shipping industry strives to minimise marginal cost amid a slowdown in global economic activity and trade. Hence, the depth of the canal is much more important than the width. 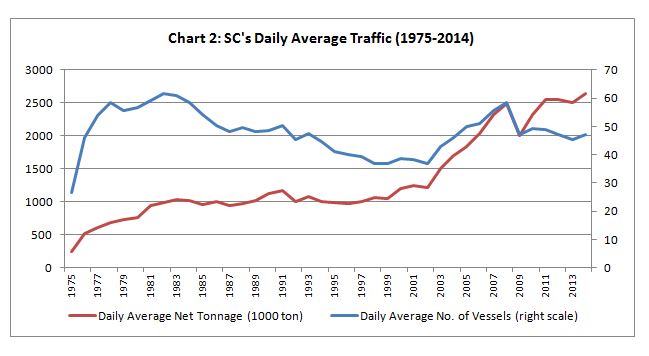 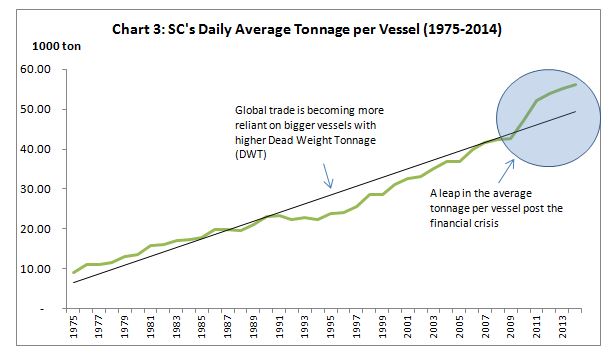 How did the depth of the Canal evolve over time? And how does the current depth compare to the Panama Canal?

The depth of the Suez Canal has increased over the years to currently support vessels with maximum draft length of 66 ft which exceeds the maximum draft length in the New Panama Canal, expected to open in 2016, which will stand at 49.9 ft. The current dimensions of the canal support 100% of fully-loaded container fleet, 95.4% of fully-loaded bulk fleet, 64.2% of fully-loaded tanker fleet and 100% of other fleet types. Some bigger-sized unsupported tankers can still pass through Suez Canal not fully-laden by offloading part of the shipment into the Suez-Mediterranean (SUMED) pipeline and reloading it at the end of the canal.

How much is the Suez Canal reliant on international oil trade?

What are the top countries using the Suez Canal for trade (exports and imports)?

What are the top countries using the Suez Canal for trade (exports and imports)?

How would transit dynamics change after the opening of the parallel waterway (New Suez Canal)?

The newly dug 35 km waterway increases the double parts of the Suez Canal to 115.5 Km, representing almost 60% of the total length of the canal. This is expected to cut the average transit time from 22 hours to 11 hours.

Would the shorter transit time automatically translate into higher receipts?

With less than half a day saving in transit time, projecting a higher market share for the Suez Canal in global maritime transit would be premature, especially with the New Panama Canal coming on stream next year. The total traffic passing through the canal will ultimately depend on the growth in the volume of global trade, which is currently subdued. However, the Suez Canal Authority might capitalise on the transit time savings in order to increase transit fares, but such increase would still be limited. The development of the Suez Canal area into a logistics, industrial and re-export hub provides much bigger opportunities to the Egyptian economy, leveraging on the strategic location of the Suez Canal at the crossroads of international trade routes. A master plan for the project was presented during the Egypt Economic Development Conference (EEDC) held in March 2015, and key legislative amendments had been made to allow for the establishment of the Suez Canal Special Economic Zone and grant the Suez Canal Authority the power to establish companies. 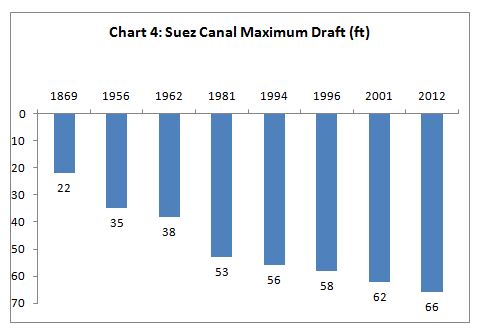 AIG to focus on selected products for growth in Egypt