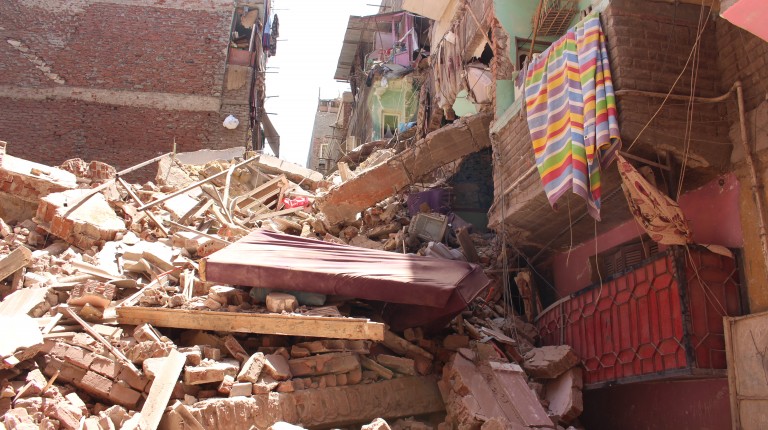 About 40 families have been stranded on the streets of Cairo’s Imbaba district following the collapse of a building on Thursday, but refuse to move elsewhere. Several other buildings were evacuated as a result of the building’s collapse. No injuries were reported, but residents are currently living either in a big tent, or in the homes of neighbours.

Giza Governor Khaled El-Adly told state newspaper Al-Ahram that the government would transfer the families to other residential units in 6th of October City starting from Sunday. However, the majority of the impacted residents are refusing to take part in the initiative. Daily News Egypt spoke to a group of the stranded residents on Sunday.

“I am now three months pregnant and I have a young girl with special needs. We have been staying here for almost a week. It is hard to go anywhere to get medicine or anything for my children, as we are surrounded by the [damage caused by the] collapsed building,” said Salma Abdel Fattah, one of the residents living next to the collapsed building and who had to leave her apartment after the district authority’s decision to evacuate.

According to Abdel Fattah, moving out of Imbaba would be impossible, as she cannot afford to live far away with her children in schools located in the district. Many families also have life commitments in the same neighbourhood of Abu Raya.

A week ago, one of the residents who owns a second floor apartment announced that a building would be demolished. When questioned by other residents about the potential risks of such a move, she said she had official documents from the district authority that allows her to make the decision.

Residents claim the demolition process took place without an engineer, or any other official, visiting the field. They allege that the woman took the initiative by herself, and used a bulldozer to destroy the building. Five days later, a six-floor building collapsed, with several other surrounding buildings sustaining damage in the process. The residents do not know the woman’s whereabouts, as she fled the neighbourhood immediately.

Imbaba is one of many locations in Egypt which sees buildings suffering from imminent collapse due to poor maintenance and deteriorating conditions. During a cabinet meeting on Sunday, Minister of Urban Development Leila Iskandar announced that 356 slums areas in Egypt recently underwent monitoring and were classified as rundown areas. Those areas, she said, are experiencing problems relating to construction, have no drainage system, and have very high populations, which are all threats to its collapse.

Salah, the owner of the collapsed building said: “We do not know what will happen next, even if we moved to the government apartments, it is just temporarily, a camouflage. Besides, we cannot afford living elsewhere.”

“We are not moving [anywhere] until they find us a concrete solution for this building, but if we agreed to move away they would think that our problem was solved and there is no need to come back to Imbaba,” he added.

The neighbourhood’s buildings are poorly constructed and have no solid concrete. Residents living in the neighbouring buildings to that which collapsed said they felt their houses shake whilst the building collapsed.

“We notified the district and they came immediately and ordered to evacuate the building and surrounding buildings. Fifteen minutes later exactly the building collapsed, just in time after everyone left in rush, thank God there were no injuries,” one of the residents said.

He added that when the equipment comes at night to remove the aftermath of the collapse, all the surrounding houses shake heavily.

“We wonder if the district authority approved the demolishing, how come they never sent someone to check the area first,” he said.

In the wake of the 25 January Revolution, the turbulent security situation allowed many land owners to build stealthily without permissions in slums and on agricultural lands, which violates the law. Alexandria is among the top cities with illegal buildings, which have reached 14,521 buildings without licences, according to official reports.

In a move to fight violations, the Ministry of Housing issued Ministerial Decree 67/2014 to amend the “executive regulations” of the Unified Construction Law. This covers land divisions that were cut down to two rules instead of three “in order to ease the process for land applicants”, the ministry said at the time.