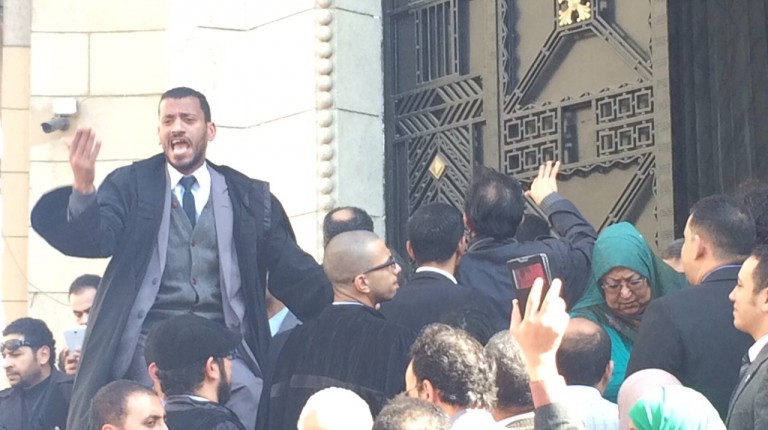 Lawyers’ Syndicate Head Sameh Ashour called, Monday, for an urgent meeting with the syndicate’s council members in Minya governorate. The call for the meeting comes following the trial of and verdicts against 22 lawyers, which sparked controversy amongst Egyptian lawyers.

On Sunday, a Minya criminal court issued harsh verdicts against a group of lawyers on charges of “insulting the judiciary”. Eight lawyers were sentenced in absentia to life imprisonment, a further sentence of three years imprisonment to one lawyer present at the trial, while 13 others were acquitted.

State news agency MENA reported the lawyers were accused of assaulting a senior judge at a Matay court in Minya governorate, preventing him from entering, whilst also assaulting and insulting him. The issue goes back to March 2013, when 22 lawyers came into conflict with the judge, thus creating a ‘cordon’ and refusing him entry to the court.

Nineteen court security eyewitnesses testified against the lawyers, and claimed during official investigations that the lawyers were “angry at the judge for giving harsh sentences to their clients in cases of illegal constructions on agricultural land”.

A new crisis seems to be on the rise between Egypt’s lawyers and the judicial system, following major conflicts with the Ministry of Interior in previous months due to repeated police assaults on lawyers.

“The court ruling is extremely irritating and insulting to the profession of lawyer. Unless the verdict is reversed, this case will cause direct conflict with the judicial institution,” prominent lawyer and member of the state-affiliated National Council for Human Rights (NCHR) Hafez Abu Seada told Daily News Egypt Monday.

The case presents several controversial aspects. On the one hand, Lawyers’ Syndicate North Cairo representative Mohamed Osman stated on his official Facebook account, Sunday, that “even if the verdict in absentia is some sort of threat, it shows that lawyers are being victim of some ambush”.

Osman said the dignity of the lawyers’ profession is in danger, and claimed they are being punished for rejecting any offences against them, regardless of who have committed them. In return, judges are dealing with them according to “their own interpretation, and not [according to] the law”.

Abu Seada was supportive of the argument, but raised another debatable point, which is the prevention of lawyers from properly practicing their jobs. He sees this as “endangering” to the human rights situation, which has been deteriorating over the past few years.

“Lawyers are pillars of the judicial system of the country and enjoy a degree of immunity. But let this aside, even the basic constitutional principles are not reinforced,” Abu Seada said.

Article 198 of the constitution stipulates that “the legal profession is free and achieves justice and the right to defence, along with the judiciary”. The constitution also outlines that lawyers enjoy “guarantees and protection laid out for them in the law as they exercise the right to defence before courts and as they deal with investigation and detection departments”.

It is also prohibited to arrest or detain a lawyer whilst he is exercising the right to defence, unless caught red-handed, all as prescribed by law. “Nonetheless, those articles have not been translated into laws, and on the contrary we are facing new legal problems,” Abu Seada added.

A new draft law, currently under state revision, plans to ratify the Criminal Code in a manner that would affect trial procedures. Among the expected changes, there would be a shortening of the period allowed to appeal verdicts handed out.

“It takes the judge at least a month to write the memorandum for the verdict, and lawyers would be required to do so in less than ten days, in a decision that entirely changes a defendant’s life,” Abu Seada pointed out.

Tensions with the judiciary began earlier this month, when a judge ordered the detention of a lawyer in court, then referred him to prosecution investigations. The incident took place during the trial of writer Fatima Naoot on charges of blasphemy.

Lawyer Mohammed Afifi, who filed the charges against Naoot, is now being charged by Naoot’s lawyer for insulting the court and for publishing insults against the judiciary, the Ministry of Justice and the president on Facebook.

Afifi has been on strike at the syndicate for a week, amid some calls to the syndicate to be “more effective” in demanding lawyers’ rights.

“The syndicate is indeed responsible and should change law organizing the work of lawyers,” Abu Seada said.

In mid-July, violence reached a peak when a police officer fired at a lawyer inside the Nasr City Court in Cairo, resulting in his injury. The Ministry of Interior apologised, and an assistant of the minister visited the victim to communicate the ministry’s message of “all respect, cooperation and help” to lawyers acknowledging that “their work is important to the system of justice”.

President Abdel Fattah Al-Sisi addressed lawyers in a public speech last June saying: “I say to all lawyers I owe you, and I apologise to you.” In the Egyptian Penal Code, assaults on public officials are punishable by prison sentences and fines, depending on the type of offence, but assaults on lawyers are also criminalised under the same law.

However, violations against lawyers continue. In political cases of high national security interests, most often lawyers are denied copies of investigations. Lawyers are not allowed to see their defendants.

“Lawyers’ basic demands in courts get constantly rejected by the judges, their right to question eyewitnesses is sometimes overlooked, all of which severely damages defendants’ rights to fair trial,” Abu Seada continued.

As most political trials take place in security facilities, defendants stand in soundproof glass cages, and are not allowed encounters with their lawyers.

Timeline: Assaults on lawyers in 2015 continue despite angry reactions

7 May: Lawyer assaulted by police officer at Nasr City police station, injured in the leg

20 May: Lawyer’s arm broken after being attacked by a police officer in Sohag

7 June: Damietta court sentenced both the police officer and the lawyer to three months and one month in jail, and fines of EGP 3,000 and EGP 1,000, respectively, to suspend the verdicts

11 July: Lawyer injured after being shot by a policeman in court

July: Lawyer Mohammed Afifi, who filed the charges against Naoot, is charged by Naoot’s lawyer for insulting the court and for publishing insults against the judiciary, the Ministry of Justice and the president on Facebook