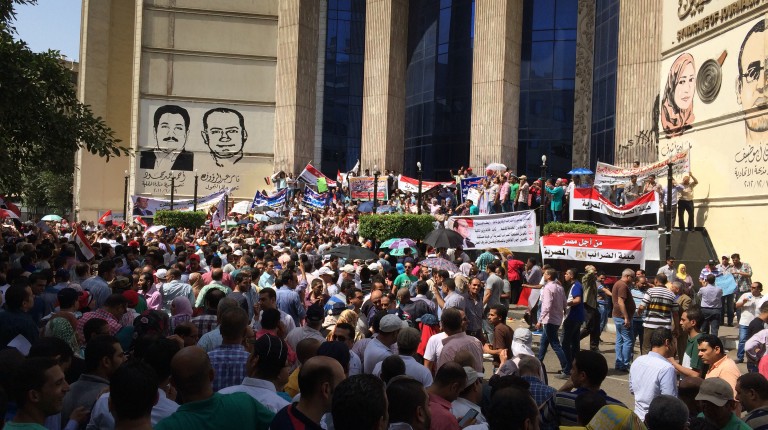 At least 2,000 state employees from the Customs and Tax Authorities held a demonstration Monday in front of the Press Syndicate in Downtown Cairo, protesting the newly issued Civil Service Law.

They demanded the “ouster of the Minister of Finance, [an end to] implementing the new law until a new committee is formed and a replacement is found, as well as granting the Tax Authority its independence”.

Protesters told Daily News Egypt that they might escalate the protest if their demands are not met. They also chanted for the independence of the Tax Authority, saying “we want to be an independent body and to have syndicates and committees to regulate affairs”.

The protest caused a traffic jam in the busy Downtown area, with heavily armoured security personnel and riot police spread throughout the surrounding streets. A police general, who was investigating the vicinity of the protest, told Daily News Egypt that the demonstration will not be dispersed.

The protest can be considered the biggest since the 30 June protests in 2013. The organisers said they applied for permission to protest, which was denied. The Press Syndicate closed its doors in anticipation of any violence during clashes between the protesters and the riot police. The syndicate is home to many sit-ins, and protests, and is frequently a starting point for many marches.

The Egyptian Workers Customs Authority said in a Monday statement: “Thousands of the authority’s workers from different governorates gathered to stop the oppression that was imposed on us after the implementation of the Civil Service Law. We want to affirm that we aware of the serious current events the country is going through. We are not looking for extra privileges, but for basic rights.”

Other demands included the “application of the minimum wage and countering corruption”.

Latifa Al-Asad, a Tax Authority worker, said: “We are only here to demand our rights. We are not here to cause violence or to riot.”

“We are not members of the Muslim Brotherhood,” Al-Asad added. The final statement was stressed by many of the participants who demand that “the media shouldn’t portray us as terrorists or traitors”.

In response to the protest and rumours of the government meeting to cancel the law, Minister of Planning Ashraf El-Araby told state media there are no intentions to amend the law, adding that the law is “flexible and simple”.

A pro-labour rights campaign entitled “Towards a Fair Labour Law” gave Daily News Egypt a statement, distributed at the scene of the protest.

It read: “Since the issuing of the Civil Service law, many state workers protested against it, considering it a violation of their rights…The Doctors’, Teachers’, Engineers’, and Taxes Syndicates all opposed the law, which opened the door to arbitrary dismissal and corruption.”

“It also made the employee a victim to big bureaucratic leadership,” the campaign said, adding that officials promised the implementation will increase their wages and pensions. However, the campaign added that wages did not increase, but were cut instead.

Asmaa, a Tax Authority employee, told Daily News Egypt that departmental heads frequently convinced the workers not to demonstrate or strike, saying the law will “increase their salary. For months, it has been cut, with intentions to be reduced again”.

Although Tax Authority workers dominated the protest, other employees from the Public Transportation Authority and the Ministry of Antiquities joined the demonstrations.

Abdel Azem, an employee at the Public Transportation Authority, told Daily News Egypt that the new law will only benefit the management and department heads.

“It will also raise tensions between managers and employees, as the employee can be directly fired if the manger says so, without any legal steps being taken,” Abdel Azem said.

Other employees from the Ministry of Antiquities gathered demanding more economic rights. An archaeologist raised a banner saying: “I am an archaeologist, and only receive EGP 900 a month.”

Previously, the Revolutionary Socialists Movement considered the law’s aim to be “liquidation of government employees”. Egypt ratified the new investment and civil services laws on 12 March, ahead of its Economic Summit in Sharm El-Sheikh.

This law “clearly aims for the displacement of [government] workers… who have been a target since the days of the ousted Mubarak”, the Revolutionary Socialists said. The group added that the law was issued with no prior collective discussions with workers. Official state reports claimed the civil services law aims to reform the administrative apparatus, whilst also fixing appointment and wage issues in governmental institutions.

Article 27 of the decree states that if two consecutive annual reports show a worker is “inefficient”, he or she is to be suspended from work while keeping their “right to a pension”. It also forces workers into early retirement, denies the 25 January Revolution’s demand for minimum and maximum wages, and serves rampant corruption in the workplace, the movement said.

In the current absence of a parliament, President Adel Fattah Al-Sisi holds all legislative powers. The extent to which the protest will affect the political scene in Egypt remains unknown, with many ministries refusing to comment on the issue.