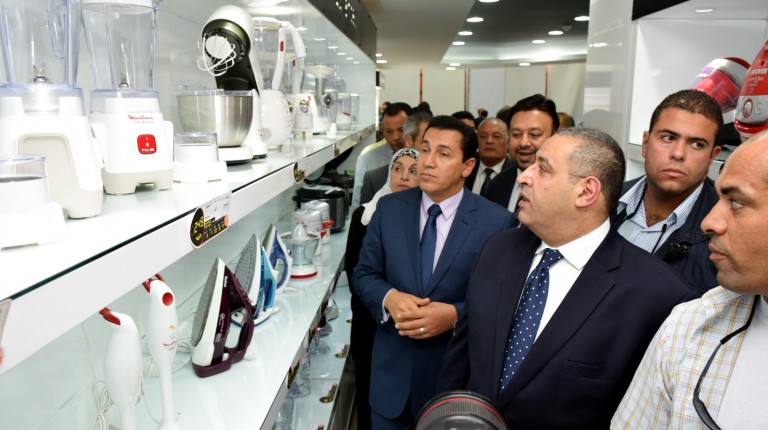 Minister of Investment Ashraf Salman and Chairwoman of the Holding Company for Tourism, Hotels and Cinema (HOTAC) Mervat Hatabah inaugurated development operations at the Banzaioun branch and the Sednaoui branch in Zagazig city.

The visit comes in the context of the government plan to develop internal trade in the state.

Salman said that internal trade companies have 326 branches distributed all over the country, 149 of which were rented and activated with a development cost of EGP 200m, including approximately EGP 54m during fiscal year (FY) 2014/2015.

Salman added that these branches have achieved revenues of approximately EGP 100m until June 2015.

“HOTAC self-manages 157 branches and achieved a net profit of about EGP 36m until June 2015,” Salman said. “The company signed a protocol with developers from the private sector to develop another nine branches, and 19 branches are being offered for partnership.”

The developments seek to exploit the distinctive locations of these branches and their sizes to offer new and different products, which will lead to high returns, according to Salman.

Salman noted that development processes for internal-trade companies have been undertaken recently, so that the Ministry of Investment can take advantage of the available resources of its subsidiaries. In addition, the ministry seeks to develop and maximise their returns to be able to contribute to the development of the Egyptian economy and provide more jobs.

The Banzaioun branch in Zagazig is built on five floors with an area of ​​1,750 sqm, and has been self-developed at an investment cost of EGP 150,000.

HOTAC has set a development plan for 84 branches in all governorates. In June 2015, 36 branches have been self-developed, or in developed partnership with the private sector.

The Sednaoui branch in Zagazig was developed at a cost of EGP 8.5m, paid by a private sector investor.

The branch is built on three floors with an area of 3,000 sqm for the sale of home appliances and electronics. Its monthly revenues amounted to EGP 78,000 and its annual returns amounted to EGP 936,000, with an annual increase rate of 10%.

Thirty-three branches out of 66 branches of Sednaoui were developed until June 2015 in partnership with the private sector or through self-development.

Egypt Invest set to shed light on the investment climate