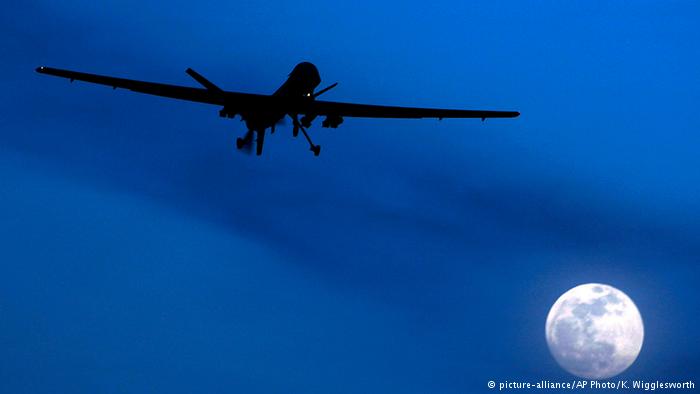 Trying to cope with a steadily growing battlefield as the “Islamic State” increases its sphere of influence, the US plans to drastically up its use of drones. Though the move makes sense militarily, it raises questions. When the Pentagon announced this week that it would expand its use of drone flights by 50% within the next four years, Shashank Joshi was not impressed.

“I think it is entirely unsurprising,” said Joshi, a senior research fellow at Britain’s Royal United Services Institute. “If you compare the challenges the US faces today to those 10 years ago, it is looking at a bigger scope of operations.”

Joshi said drones were one of the US’s best tools to keep the rise of the “Islamic State” in check. IS now controls large swaths of Syria and Iraq, has gained a strong foothold in Libya, and continues to expand its physical territory – and its reach beyond that. In addition to the threat from IS and its rival Al-Qaeda, the US also has to deal with a lingering conflict with Russia over its alleged interference in Ukraine and increasing tensions with Beijing over the South China Sea, and it is clear that drones are a necessity for the Pentagon.

The Pentagon’s plan to drastically increase flights of unmanned aerial vehicles (UAVs) does not necessarily mean that the number of armed drones will increase.

Though the bulk of US drone flights are carried out for surveillance, intelligence or reconnaissance purposes, strikes by UAVs have become the subject of heated international dispute. About 3,000 people are estimated to have been killed by US drone strikes – many of them in Pakistan. The US government does not provide an official tally. As the dispute has grown increasingly heated, the administration of US President Barack Obama has scaled back its targeted armed drone operations.

“This is the most significant change of the last five years, when the United States reached its peak number of drone strikes and appeared to start scaling back,” said Sarah Kreps, an international security scholar at Cornell University.

Kreps points out that the Obama administration does have the domestic authorisation to go after Al-Qaeda and its various spinoffs, and that includes expanding drone strikes again if it needs to: “Of course this is exactly what causes accountability problems, which is that the US has an enormous degree of latitude in how it uses force, and, from a domestic politics standpoint, there will be almost no opposition to this increase since it will be seen as a way of responding while not putting Americans at risk.”

In addition to planning to bolster its air patrols over international hot spots, Washington’s decision to rev up its drone operations also serves notice to Russia and China.

“Even if the missions are nonlethal, I could imagine China and Russia perceiving this increase to be an escalation directed at them,” Kreps said. “In this sense, increased drone missions could be exactly the right instrument in dealing with the simmering tensions with these countries.”

Message to Russia and China

Though a direct confrontation is obviously not in the cards, “the US does need to respond to some of the developments of the last several years, and the use of drones for intelligence, surveillance and reconnaissance could be a way to be seen as responding, but below the threshold that would be seen as overly reactive,” Kreps said.

Washington’s ambitious drone plan, however, faces a comparatively mundane obstacle: a shortage of pilots. In January, the US Air Force reported that it expected to lose more drone operators to attrition than it trains this fiscal year.

To reach the declared goal of 90 drone missions daily, the Pentagon “will need almost 4,000 people involved in drone operations every single day,” said Ulrike Franke, a drone expert at the University of Oxford. “Considering recent reports about pilot shortages, the Pentagon needs to come up with a better plan for how to get, motivate, incentivise and keep drone operators in service.”