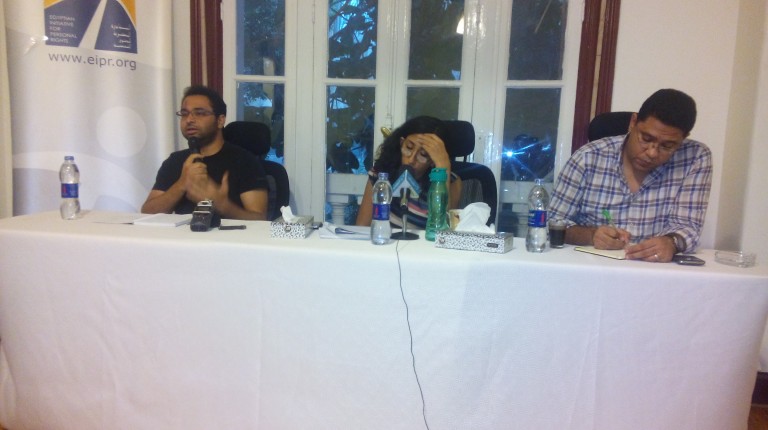 The Egyptian Initiative for Personal Rights (EIPR) held Tuesday a discussion on the state’s behaviour of enforcing morality as a means of preserving “public order”.

The discussion was a part of the EIPR’s Religion and Freedoms Forum activities and was titled “The State Teaches Us Behaviour”, it focused on the developments after 30 June 2013 regarding how the state attempts to enforce certain disciplines, not only in the political sense but also when it comes to personal freedoms.

In the course of the past year, a campaign by the state’s legal, security and propaganda arms against homosexuals, Shi’as, and belly dancersamong others all in the name of defending public order.

The discussion’s moderator, Amr Ezzat, who is EIPR’s Freedom of Religion and Belief programme officer, said that a number of recent incidents indicate a state campaign in the name of preserving “public morals” or “public manners”.

Ezzat said that the organisation while following these incidents, in which citizens have been subject to arrest and prosecution, found that there are frequent debates on what public morals or manners are, adding that these terms are “argumentative and elastic”.

Ezzat noticed that, in the lawsuits related to public morals, the judiciary acts as a standard bar that not only adjudges with the common morals of a community, but further if the level of morals loosens it intervenes to preserve “virtue”.

He mentioned a court ruling from the year 1933, in which a judge says “even if some scenes and behaviours have been common in theatres, ballrooms and beaches … the judiciary shouldn’t fail to preserve virtue”.

“Public order” was a term that had a great share of discussion in EIPR’s Tuesday event as the researchers in the discussion found it largely associated with the state’s interventions to overpower personal freedoms.

Amr Abdelrahman, head of the Civil Freedoms unit at the EIPR, provided a historical overview to the evolution of “public order” as legal and political term in the 17th century Europe and its transfer to Egypt’s civil codes. He also discussed the term’s relation with religion and morality.

Abdelrahman highlighted that there are two circulated explanations to the current regime’s campaign to “preserve public morality”: a bid to outbid the former Muslim Brotherhood regime in acting as morality defender and display the conservativeness of the state’s judiciary arm.

Abdelrahman said that the first explanation ignores a historical background of state’s act in the morality field, mentioning that when the state acts against Bahaais it refers to a presidential decree from the 1960s and when it wills to combat Coptic missionary it refers to a thirty years old article in the penal code, concluding that the roots of state defending morality are way older than current regime’s efforts.

He also said that he believes the second explanation is correct. However, it doesn’t go beyond the tip of the iceberg.

In addition to not tacking into account the historical depth of the issue, the second explanation also doesn’t explain how the conservative judiciary has a very radical stance towards the former regime of the Brotherhood and Islamists who are also conservatives.

“To approach the issue, we need a historical methodology that looks for the historical depth of the problem and goes beyond the focus on individuals and the obvious political interactions, and that tries to discuss the developments of law and judiciary and their relations with the public sphere,” Abdelrahman explained.

Dalia Abdel Hamid, Gender and Women’s Rights Officer at the EIPR, discussed the institutions that the state uses to control and preserve public morality.

“Starting from October 2013, there was a systematic campaign to arrest homosexuals and transsexuals that until now almost 200 persons were arrested charged with debauchery… Some of them were acquitted and some were sentenced to 9-12 years in prison,” she said.

“When we tried to understand the reason behind this state behaviour, we found a term that can be closer to help us understand better. The state tries to stir a state of ‘moral panic’,” she added.

The researcher addressed some media outlets with heavy criticism for deliberately cooperating with the state in stirring this panic against a wide range of marginalised sects.

Abdel Hamid stated that there are four bodies the state uses in its campaign against homosexuals and transsexuals: police, judiciary, media and religious institutions.

She also highlighted a court ruling in 2014 by the administrative judiciary court that grants the ministry of interior the right to deport foreigners if they are homosexuals or represent danger to the public morals.

In the last 10 days, six foreigners were arrested for debauchery and some of them were acquitted. However, afterwards they were pressured to leave the country,” Abdel Hamid said.