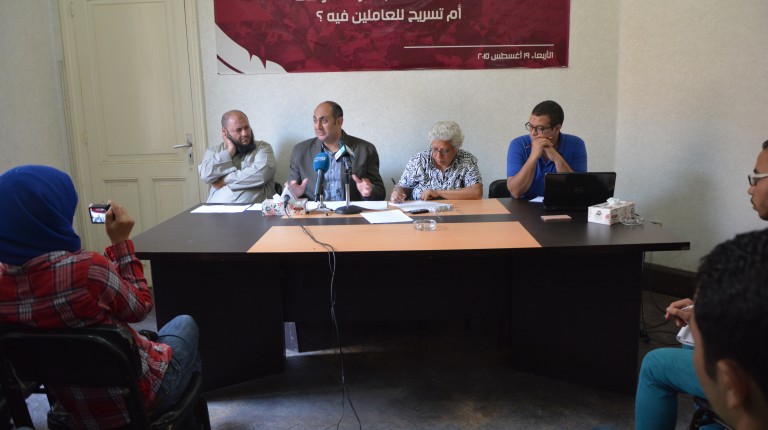 The Egyptian Center for Economic and Social Rights (ECESR) held Wednesday a press conference attended by syndicate leaders to discuss their objections to the much-debated Civil Service law.

Hoda Kamel, Head of the ECESR’s Labour Programme, gave an opening speech in which she stated that the law was issued without any social dialogue. Syndicates and associations representing the workers and employees affected by the law were also not engaged in dialogue.

Tarek El-Behairy, representing workers from Cairo’s Public Transport Authority, said the law is unclear regarding which public sector workers and employees fall under its legislation.

“Workers got their salaries under the 18/2015 civil service law, although Minister of Planning Ashraf El-Araby said that they will not fall under the law,” he said.

El-Behairy added that his monthly salary decreased in July, noting that it will affect his pensions after retirement.
He added that the state “failed in integrating” workers in the discussions for the law’s issuance and its amendment, adding that “the law not only decreases the number of workers, but also their salaries”.

Ahmed Sherif, representative of workers at the Ministry of Antiquities, criticised setting the annual raise at 5% of the salary. He said the annual inflation increases by 10%, according to Central Bank of Egypt (CBE) reports, which subsequently means the value of salaries decreases annually rather than staying the same or increasing.

Sherif also criticised the law as it called for the leaders “who led the public sector to ineptitude” to decrease the number of workers in the sector.

Mohamed Shalaby, representative for the education sector’s administrative workers, said the regime promotes the idea that the law will reform the public sector, whilst ignoring social justice.

“Army and police salaries were raised three times, and for us they give us the Civil Service Law,” he said. “We want a fair and unified law for all public sector workers and employees.”

Prominent labour rights lawyer and former presidential candidate Khaled Ali said: “Ruling regimes used the public sector for political gains.” He added that this misuse led to the ineffectiveness of the sector.

“The aim of the civil service law is to reduce employees of the public sector to 3.5 million employees. However, the effectiveness of the law depends on its code of conduct,” he said.

He also highlighted Articles 19 and 20 of the law that the regime “says [are] best for reforming the public sector”, saying that the presidency and the cabinet were exempted from applying those articles.

“I ask the president, and this is my first time to do so, to keep in mind that the demands of the workers are social demands, and I ask him not weigh them on the political polarisation scale,” Ali concluded.