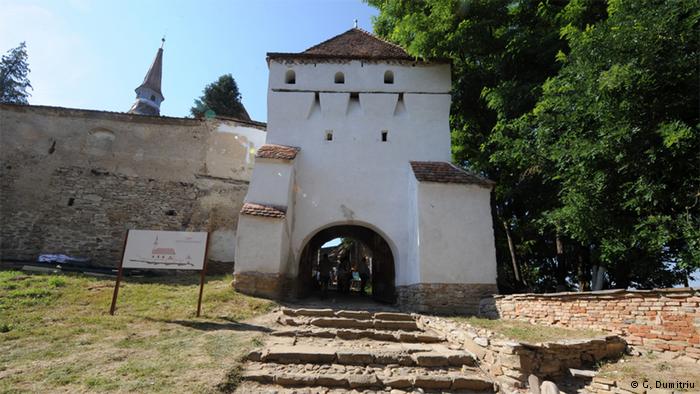 For many, the name Transylvania conjures up images of vampires. The plateau surrounded by the Carpathian Mountains is famous around the world, thanks to Bram Stoker’s novel “Dracula.” But less well known is the fact that, in German, Transylvania is referred to as Siebenbürgen, or “seven fortresses.” Since the 12th century, it’s been home to the ethnic-German Transylvanian Saxons.

If you listen to the skeptics, this group’s almost 900-year history is nearing an end. Before World War II, there were around 300,000 Saxons in Transylvania; today, they number around 15,000. Many migrated to Germany during the communist dictatorship, and even more so after its collapse in 1989. Deserted farms and churches stand as a reminder of a bygone era.

Many of those who left find their way back year after year, back to the castles, villages, and towns to visit friends and relatives. And they also return to celebrate traditional festivals. Some also get involved in cultural and humanitarian projects.

The most prominent example is German rock singer Peter Maffay. His Tabaluga foundation has helped convert an old Protestant parsonage in the village of Roades into a vacation paradise for traumatized children. The complex also has a guesthouse, a residence for workmen and volunteers, an organic farm, and a workshop. All of this also benefits the local mainly Romanian and Roma population. Maffay also initiated the building of a new water supply system and a medical clinic.

This summer, Maffay’s commitment in the region was doubly recognized. He was named an honorary citizen of his home city Brasov (known in German as Kronstadt), which he left as a young boy with his family in 1963. And the school he attended now sports a plaque bearing his name.

Together with a “real returnee,” the successful businessman Michael Schmidt, Maffay founded a cultural festival three years ago in Haferland, a region near Kronstadt. Every summer, thousands of Transylvanian Saxons gather here together with Romanians, Hungarians, and Roma to celebrate their history and traditions. Both Maffay and Schmidt share a passion for regional customs, and a desire to improve the lives of the people who live there.

Schmidt emigrated in 1983, but returned home after the fall of the Iron Curtain. He also heads a foundation, which has rebuilt a centuries-old parsonage in Crit (Deutsch-Kreuz), the village of his birth. Today, it serves as a guesthouse, but is also used to host social and cultural events.

The Mihai Eminescu Trust Foundation is active in the neighboring village of Viscri (Deutsch-Weisskirch). Its patron is Britain’s Prince Charles, who visits the village almost every year. He bought an old farmhouse there, and supports several social projects, together with Caroline Fernolend, a local resident who handles the business of the Romanian-British foundation. Without her, and without the prominent politicians and church leaders, the weeklong Haferland cultural festival wouldn’t be possible.

Most of the roughly 130 remaining medieval Transylvanian Saxon castles now lie in ruin and are in danger of collapse. The Protestant Church in Romania is now trying to gather funds for their restoration from the EU, the Romanian government, and private donations. So far, around 20 have been restored to their former glory, and some have even been named UNESCO world heritage sites.

Without the passion of residents both old and new, it would be easier to believe the skeptics who warn that the Transylvanian Saxon history is coming to an end. But the people who are engaged and who are breathing new life into a region that was declared dead are showing the world that things can be different. Restored churches and farms, organic agriculture, and sustainable tourism – that’s a Transylvanian recipe for success that could even overshadow Dracula.

A pictorial dream: 'Saqara Under Sand' will tour the world

A star with a different passion

A woman's guide to making a marriage work