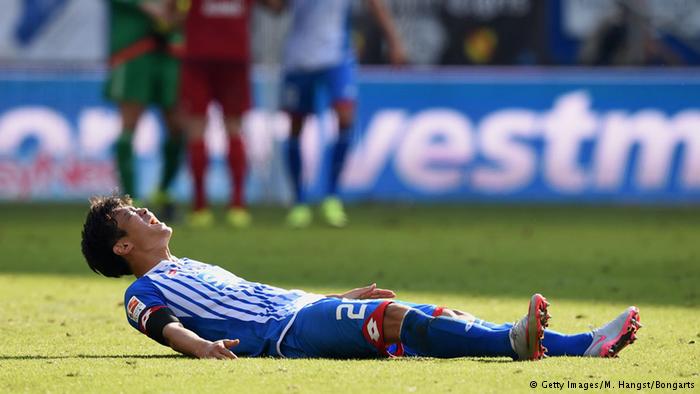 With so much happening on matchday two of the Bundesliga, Jonathan Harding decided to wrap up the issues that struck a cord with him in his ‘harte Thesen’ (hard opinions) on the latest happenings in Germany’s top league.

Bayern and that winning feeling

Having conceded a record-fastest league goal, Bayern struggled to find their way into the game for long periods as Hoffenheim’s game plan worked a treat. Naturally though, they found an equalizer just before the break thanks to Thomas Müller’s knee. Not only is that a typical goal for Müller (that’s one of the many reasons he is so good at what he does), but it is also a typical goal for Bayern given the circumstance. In the second half, Hoffenheim missed a penalty after Jerome Boateng was correctly sent off.

The spot kick was poor, but even the luck was on Bayern’s side when the deflection off the inside of the post squirmed under Manuel Neuer’s body rather than deflecting back into the goal off it. It was at this point that Hoffenheim realized the opportunity they had missed, and against which team it had come. Crumbling inside that they could have changed an inevitable defeat to Bayern into a deserved victory, Hoffenheim stopped marking Douglas Costa for the second time in the game.

His trickery out wide ended in a goal from Robert Lewandowski, who came off the bench (of course) to win it. Of course, winning generally makes Bayern feared but winning like this is what makes them so dominant. It just doesn’t win them any sympathy from anyone else in the league and that’s probably why the concept of Bayern-Dusel (simply translated, Bayern luck) exists.

Last season, Paderborn was hailed as being brave for its attempt to play attractive, attacking football while trying to survive in their premier Bundesliga season. This year, Darmstadt arrives with a humbler squad but has delivered, so far, an equally striking albeit entirely different game plan.

Against, Schalke, Darmstadt secured their second point of the season. Who would have thought they would be unbeaten after two games but Stuttgart would be without a win? The manner of Darmstadt’s impressive point away at Schalke might have had a cake or two of fortune – a necessary ingredient to any survival campaign – but it was also clear that the long ball was and perhaps will be the way Darmstadt look to survive. With such little possession – 22% – Darmstadt relied on a fairly direct playing style to get themselves into the game. It worked, too, as goalkeeper Christian Mathenia sent a long ball forward that Schalke failed to deal with and Konstantin Rausch reacted quickest. There’s no denying it is a risky strategy – only 79 of 163 passes were completed – but with more defensive recruits arriving than offensive ones over the summer, perhaps it is the right one for Darmstadt? In any case, it’s so far from being an attractive style of play that it might just win over a few hearts anyway.

Even in the mixed zone after the survival-securing win away against Paderborn at the end of last season, Daniel Ginczek cut a fairly humble figure. He knew that had he not eventually scored in that game, he would have been remembered for all the wrong reasons. As it stands though, he can do wrong even if Stuttgart can do no right. Another brace from the striker has left him with nine goals in his last 11 Bundesliga games – the most of any player in this time span. Yes, that’s a classic stat to reel off for a striker that many feel is one-dimensional but he keeps on getting better. At 24-years-old, he’s no spring chicken but he’s a long way from being served up either.

Mario Gomez was the last striker to rock the stands in Stuttgart, and he had little else about him but goals (lots of them mind). Ginczek certainly has more on offer than Gomez did back then, and although Stuttgart might be short of a playmaker or two, Ginczek can only try and use this advantage to his personal gain. If Stuttgart don’t improve the way that many – myself included – believe they have the potential to, then Ginczek will surely – provided he can stay injury free – be playing somewhere else next season. More so, if he manages all of that, why not take him to France next summer Jogi? Everyone could do with a confident, fully fit and in-form striker in their squad.