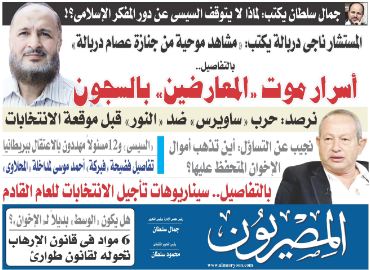 Two privately-owned newspapers were censored over critical content on Saturday, while Tahrir newspaper announced will stop its printed issue, due to financial burdens.

An issue of the Al-Mesryoon newspaper was pulled from print on Saturday over critical content that featured an opinion piece criticising President Abdel Fattah Al-Sisi’s religious reform rhetoric. It also contained a report on a mysteriously delayed visit of Al-Sisi to the UK, which claimed it is related to attempts to legally prosecute Al-Sisi in the UK.

The newspaper’s CEO Gamal Sultan told Daily News Egypt that the Al-Ahram printing press informed Al-Mesryoon that there were “objections” to the two pieces, without mentioning the authority behind the objections.

Sultan, who wrote the opinion piece, said: “Al-Ahram is a state-run institution and it submits to pressure from ‘sovereign’ authorities. They do not name the authority or the person, it is all arbitrary.”

The newspaper had to change the two pieces to end a delay in printing that lasted for almost four hours, according to Sultan.

An issue of Al-Sabah newspaper was also subject to censorship, this time over an opinion piece that criticised a party leader who is rumoured to be close to the president.

Al-Sabah was informed, also by the Al-Ahram printing press, of the objectionability of an opinion piece. The article described Mohamed Badran, head of the Mostaqbal Watan party, a relatively unknown newly established party, as a “spoilt child” of the president.

Badran responded to the news in a statement, saying that he was not involved in stopping the issue from printing and that he found out about what happened by chance.

The article wasn’t published in print and was also removed from the website.

Meanwhile, the CEO of the Tahrir newspaper Akmal Qortam announced Saturday that the paper will stop the print issue of the paper by the end of August, telling journalists the reason behind the decision is that the newspaper has tallied EGP 55m in losses over the past two years.

The administration’s plan is to close down the print edition and depend on the website and a virtually unknown weekly sister-newspaper, entitled “Al-Aham”.

A journalist from the newspaper told Daily News Egypt that the “journalists’ fate is unknown”, as the decision to cancel the print edition will lead to downsizing the staff. The journalist added: “It is said that a committee will be formed to decide on which journalists will stay.”

The newspaper became sharply critical in its content since a change in the editorial leadership, as Anwar Al-Hawari became Editor-in-Chief over two months ago.