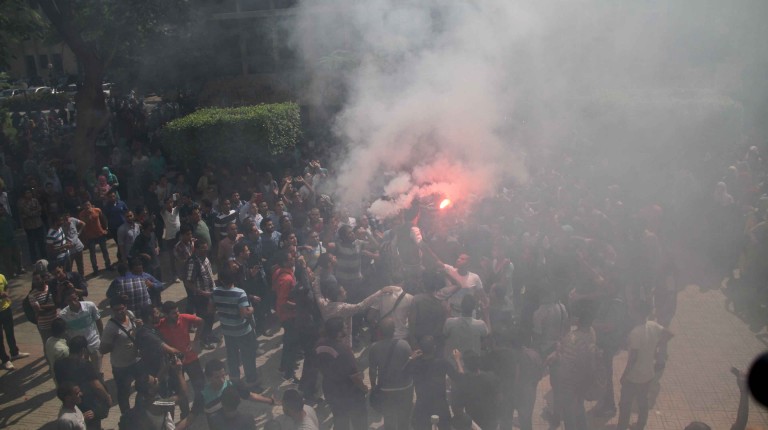 Independent observatory Democracy Index said in its report on student movements in 2014/2015 that 807 protests took place over the past academic year across all Egyptian universities.

The latest figure marks a significant decrease compared to the previous year, which witnessed 3,000 protests. Cairo University was the university with the largest number of protests.

“The decrease of protests rates does not reflect any successes from the officials or security sides,” the report mentioned.

However, Cairo University’s administration and police forces set up new security measures ahead of the previous academic year beginning to prevent further violent clashes between students and police.

These measures included equipping all entrances with x-ray machines and metal detectors manned by security personnel from a private firm called Falcon. Security men started patrolling the premises on a 24-hour basis to prevent any infractions from taking place inside the university campus. In addition to inspecting students at entrance, security personnel also inspected students before they entered lecture halls.

Mohab Saeed, a lawyer at the Association of Freedom of Thought and Expression (AFTE) who works on providing legal assistance to students, told Daily News Egypt: “The rate of expelling students decreased, because the pace of events accompanied with violent acts has become much slower.”

Students marched twice a week on average during the 2013/2014 academic year, and during every protest security forces stormed into the campus to disperse them. This left casualties, with many students also arrested, in addition to other students arrested with no direct involvement in the protests, but who were in the vicinity of the dispersal.

The protesting students also witnessed mass suspensions, but all students were allowed to return by court order, Saeed said. During the past academic year, however, the suspension rate decreased due to the decrease in the number of protests, although most of the students who were dismissed did not return to university.

“Students have been expelled for expressing their opposing views, and not only for protesting,” Saeed said.

Democracy Index reported 600 cases of dismissal across all Egyptian universities over the past academic year, with at least 1,000 arrests.

A new amendment was made to the law governing universities in 2013, with Article 184B stating that the university’s president is mandated to immediately expel any student, instead of the discipline committee. Dismissals also extended to professors suspected of belonging to the now-banned Muslim Brotherhood.