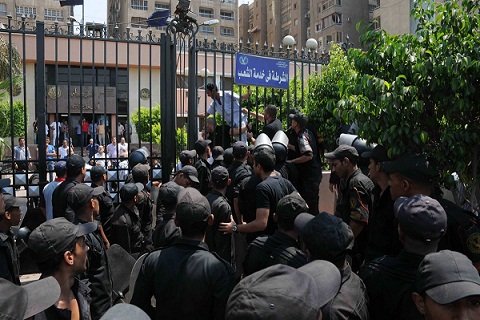 Hundreds of non-commissioned officers in the Sharqeya governorate ended their strike Monday morning, after the Ministry of Interior’s promises to look into their economic demands following two days of strikes.

The ministry’s press office said Monday that all striking personnel left the site of the Security Directorate, and that all police stations are now fully operational.

It added that the personnel on strike were convinced to end the strike after meetings with high officials delegated from the Minister of Interior.

A ministry statement said the non-commissioned officers announced “their pride in belonging to the police apparatus, and appreciation of their colleagues’ sacrifices, to the extent they put aside personal demands in the current period”.

However, Waleed Al-Mohamady, the strike’s spokesperson, told state media that they called off the strike after the governorate’s security director promised their demands would be met.

There were also reports that officers from other governorates came to the sit-in to stand in solidarity with their colleagues.

Some of the policemen said that demands also include the issuing of late bonuses from previous months. This includes the “Suez Canal bonus”, which was offered to officers and soldiers who participated in the security arrangements for the celebrations. They argued that they also protected police stations and public institutions.

They chanted against Minister of Interior Magdy Abdel Ghaffar, whilst also demanding that the public not identify them as members of the Muslim Brotherhood. They also demanded that the minister deliver their demands to Prime Minister Ibrahim Mehleb.

The officers demanded the issuance of promotions, as well as the amendment of the Pensions Law, and for it to be applied to police victims, or those who have been injured or killed in action. They demanded equality with officers, who have a pensions department that offers financial support to their families.

Prime Minister Mehleb commented on the economic demands of the officers during a televised interview on privately owned Al-Hayah, TV channel, saying that the time is not suitable for “individual demands for anyone”. He added that police officers have a crucial role, and “we can’t be late in answering their demands”.

Such arguments are often used to counter protests engineered by professionals such as doctors, nurses, government employees.

However, at the end of the interview Mehleb described the demands as unrealistic, “which adds to the state’s problem, especially as we are fighting terrorism”.

On Sunday, low-ranking police officers attempted to storm the Sharqeya Security Directorate, after the arrival of anti-riot troops from the Central Security Forces (CSF), resulting in clashes. The coalition of non-commissioned officers in Sharqeya said that during the strike, several generals and high ranking official were barred from the entering the security directorate.

Following arguments between the protesters and security forces who were securing the building, riot police attempted to disperse the protesters, who occupied the front of the building. Tear gas was fired, while the protesters threw stones and issued warning shots in the air. An unconfirmed number of people were injured.