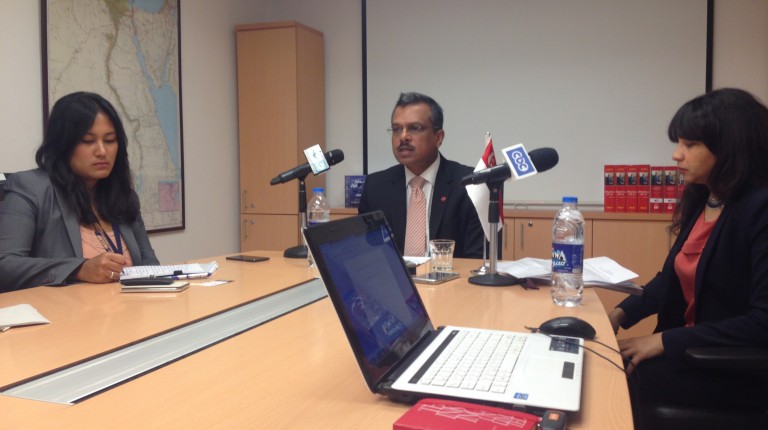 Premjith , speaking at the embassy on Wednesday, gave an overview of the bilateral relations between both countries, and areas of cooperation as well as a brief on Al-Sisi’s programme during the visit.

“I describe President Sisi’s visit to Singapore as historic,” he said. This visit will be the first presidential visit between both countries and this year marks the 50th anniversary of Singapore independence.

“It will inject fresh momentum to the relationship, and will increase the frequency of exchanges on both sides,” he added. Egypt and Singapore tend to support each other in international events, with Singapore the first country to support Egypt’s nomination in the UN Security Council.

Al-Sisi’s visit will seek to discuss three main areas of cooperation, namely: maritime management and development especially after the inauguration of the news Suez Canal axis in early August; developing primary and vocational education; and water resources management as well as ways to assure adequate water supply for Egypt’s growing population. The president will also explain during his visit foreign investment policies to foreign investors in Singapore.

“Developing vocational education is very important because it bring out students with skills who could immediately be employed,” Premjith said.

Egypt’s primary education ranks as one of the worst worldwide in terms of quality, according to the 2013/2014 Global Competitiveness Report issued by the World Economic Forum. However, there are approximately 300 students from Singapore who come to study at Al-Azhar every year.

According to Premjith, Singapore’s Muslim community view Al-Azhar as the major centre for Islamic education, as they consider it to stand for tolerance and moderation. “For students who are eager about Islamic studies, Al-Azhar is the university of choice,” he said.

Speaking on economic relations between the two countries he said: “I would say it is good but could be developed much more.”

“Egypt has the third largest market for Singapore investments in the Middle East. Trade exchange reached $671m in 2013 in agriculture and maritime,” Premjith added.

Egyptian bilateral relations with Eastern countries have become increasingly important since Al-Sisi took over as president, especially with Russia, after decades of negligence.

Singapore’s visit is part of an Asian tour by President Al-Sisi to Indonesia and China as well. Al-Sisi is currently in Russia for a three-days visit.