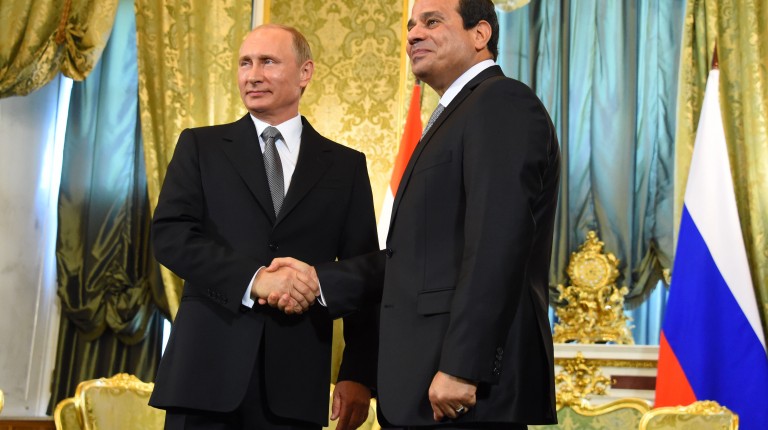 President Abdel Fattah Al-Sisi met with his Russian counterpart Vladimir Putin for the fourth time during his third visit to Russia as head of the Egyptian state, for talks that have focussed on economic and nuclear developments, and international conflicts, including Syria.

In a joint press conference prior to the two presidents’ dialogue, Putin praised an increase of 86% in bilateral trade to $5.5bn between the two nations in 2014, compared to the previous year, and said their other talks would cover the many conflicts in the Middle East. “Egypt has a key part to play in all of these issues,” Putin said.

According to Putin, Russia supplies Egypt with 40% of its wheat needs, coming to 4m tonnes. Putin covered the possibility of creating a Russian industrial zone in the Suez Canal region.

Speaking on terrorism and conflict, President Al-Sisi said Egypt is using development as well as force to counter the two, and praised the presence of Russian Prime Minister Dmitry Medvedev at the ceremony inaugurating the new Suez Canal axis. “It was an important gesture when we saw Russian naval vessels sail the new Suez Canal,” Al-Sisi said. The president also paid respect at Moscow’s Grave of the Unknown Soldier

Al-Sisi met with King Abdullah II of Jordan and Crown Prince of Abu Dhabi Mohammed bin Zayed Al Nahyan prior to the opening of the MAKS air show of military technology. The leaders agreed on the need for Arab and Islamic nations to work cooperatively to address “the dangers of terrorism, extremism, and terrorist groups”, the president’s spokesperson said. It is understood that Putin discussed Syria with all three leaders.

On Tuesday, beleaguered Syrian President Bashar Al-Assad spoke to Lebanese media to reaffirm that his state has the support of the Russian and Iranian administrations. President Al-Sisi and King Abdullah II agreed on the need for a “comprehensive political solution that will bring an end to the suffering of the Syrian people and preserve the unity and territorial integrity of Syria”, according to the president’s spokesperson.

Russia and Iran have consistently supported Syria, and argued for the need to include Al-Assad as part of a political resolution to the four-year long civil war. Despite military inaction, many Western leaders hold that Al-Assad must be removed from power for a resolution to the conflict that has killed over 250,000 Syrians and displaced and estimated 9 million people internally and externally.

President Al-Sisi’s spokesperson said on Wednesday in Moscow that the presidency believes it is too soon to judge the nuclear agreement signed by the six leading world powers and Iran, state-owned Al-Ahram news website reported.

Relations have been growing stronger between Egypt and Russia. In February during Putin’s visit to Cairo, the two presidents announced they would cooperate to build Egypt’s first nuclear power plant and increase gas trade. Some media outlets had suggested that during Al-Sisi’s current visit that the deal would officially be signed.

Also in August, Russia gifted Egypt a state of the art missile naval vessel, which took part in the inauguration of the New Suez Canal. A group of Egyptian navy officers were due to go to Russia to receive training for the vessel, and in June the two countries held their first ever joint naval exercise.

However, while many have suggested that closer ties have come at the expense of Egypt’s relationship with the US, Secretary of State John Kerry also visited Egypt for a strategic dialogue between the two countries. As part of the resumed $1.3bn of military and economic aid, the US also delivered a set of eight F-16 fighter jets and two naval vessels.