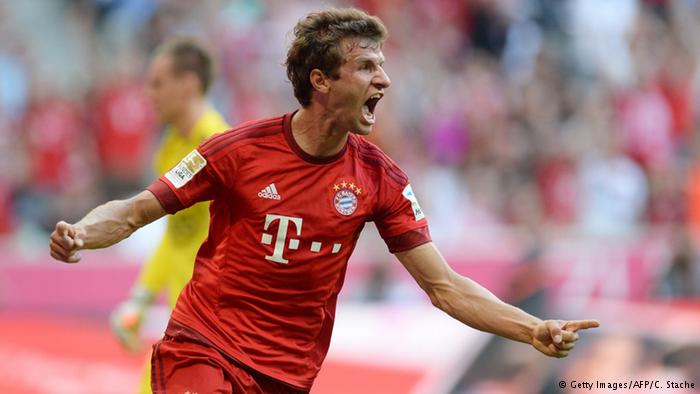 Frankfurt piled more hurt on Stuttgart with a 4-1 win, while Cologne overcame Hamburg. And Bayern Munich showed Leverkusen who was boss with a 3-0 home victory that wasn’t as close as the scoreline suggested.

The perfect opportunity, one would think, for Leverkusen to lob high crosses into the middle, but the visitors simply didn’t see enough of the ball to generate any significant offensive pressure. Aside from a couple Hakan Calhanoglu free kicks, it was a very quiet day at the office for Manuel Neuer.

Thomas Müller opened the scoring in minute 26 after one of Douglas Costa’s patented muscular runs up the sidelines. After that Bayern’s victory was never in jeopardy.

Müller scored again on the hour mark from the spot, after Roberto Hilbert shoved Arturo Vidal in the box. And ten minutes Hilbert conceded another penalty by handling the ball. Arjen Robben stepped up to do the honors the second time.

The scoreline stayed at 3-0, which had more to do with Bayern losing interest in the match than anything else. The walk-in-the-park win against one of Germany’s top sides suggests that Munich may again be in a class by themselves this season.

Bad luck or bad mistakes? That was the question in the early Saturday action. In Stuttgart, there was plenty of both, as the hosts were drubbed by Frankfurt.

The visitors took the lead after ten minutes in fortunate fashion when a deflected cross ricocheted off Stuttgart defender Adam Hlousek across the line for an own goal.

Stuttgart had more of the ball and more chances after that, but the equalizer was also a bit lucky. Daniel Didavi slid into the ball on the half-hour mark from an offside position, but the resulting goal was allowed to stand.

Luc Castaignos restored Frankfurt’s advantage just before the break against the run of play. Stuttgart looked good for a comeback in the second half but were undone when keeper Przemyslaw Tyton brought down Castaignos in the area. Frankfurt received a penalty, which Haris Seferovic converted, while the Polish keeper got a red card for his trouble.

Castaignos added insult to injury just before the final whistle to complete the final 4-1 scoreline. Stuttgart have failed to earn a point in their first three matches and have a goal difference of minus six, sitting bottom of the Bundesliga.

Cologne come back versus Hamburg

If Stuttgart shot themselves in the foot, Hamburg were tripped up by a very dubious refereeing decision in Cologne. The northern Germans took the lead just after the interval when Lewis Holtby, goalless for all of last season, slotted home a nifty pull-back pass by Sven Shipplock. Counter-attacking Cologne were fortunate that Philipp Hosiner erased that advantage a quarter of an hour from time.

Six minutes later, Cologne were handed the lead when referee Deniz Aytekin awarded the Billy Goats a penalty and sent off Emir Spahic for felling Anthony Modeste in the box. Replays showed that the Cologne forward stumbed over the ball. But Modeste was in no mood to look a gift horse in the mouth and converted with ease from the spot, sealing a lucky 2-1 win for the Billy Goats.

By contrast, Mainz needed no luck at home against Hannover. A Yoshinori Muto brace – his first two goals in the Bundesliga since joining from Japan – and a Yunus Malli goal inside 47 minutes secured a 3-0 victory for the hosts. Hannover have only one point after matchday 3 and look toothless.

Ingolstadt are off to a good start, getting their first-ever Bundesliga away win, 1-0 in Augsburg. The home side’s keeper Marwin Hitz understimated the danger of a Matthew Leckie shot from 22 meters out just after the hour mark, and that was all she wrote.

And the Bundesliga’s other newly promoted team, Darmstadt, earned a third straight draw in their scoreless home match against Hoffenheim, which left little to speak of.

Neuer: Things aren’t working the way we’d like at the moment