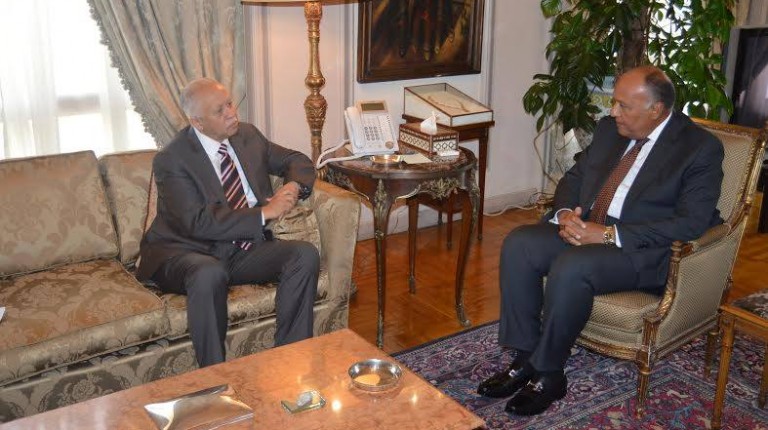 Egypt’s Foreign Minister Sameh Shoukry met with his Yemeni counterpart Riyad Yassin to review the latest updates on the Yemen conflict and discuss bilateral cooperation between Egypt and Yemen.

The Saudi-led coalition has launched air strikes on Houthi rebel locations in Yemen’s capital, Sana’a, for three consecutive days since Thursday. The strikes were considered the most violent since the conflict started in Yemen, as it has targeted multiple locations near the presidential palace in Sana’a and the Al-Nahdein mountain camps.

“The meeting discussed thoroughly the security situation in Yemen and the ‘developments’ of the coalition in retaining security and empowering the current ‘legitimate’ government,” the Foreign Ministry spokesperson Ahmed Abo Zeid said.

Saudi Arabia launched an attack on Yemen and took control of its flying zone in late March, as Houthi rebel groups called for forming an army to fight exiled President Abed Rabbuh Mansour Hadi and his government.

Despite the different Yemeni views towards the airstrikes, civilians share a common struggle. This conflict has left many Yemeni civilians abroad stuck between the struggle of returning home and affording the expenses of their lives abroad.

As ships en route between the GCC and the Mediterranean pass through Yemen’s coastal waters, the country’s security status is crucial for several countries, especially oil exporting ones. However, Yemen has a history of conflict and division attempts between the north and the south.