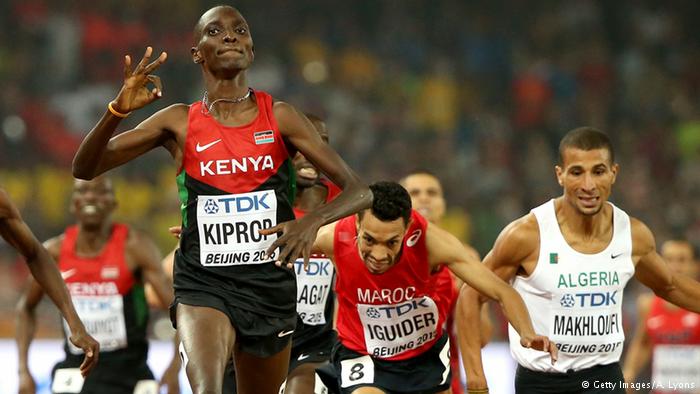 Kenya has hailed its athletes for bringing back home seven gold medals at the just concluded IAAF championships in Beijing.

The historic victory comes despite the fact that two of its athletes were suspended because they tested positive to banned substances. DW spoke to Isaiah Kiplagat, chairman of the Kenya Athletics Association.

How do you assess the performance of Kenyan athletes in Beijing?

Having seen their performance in Beijing and being on top of the world, I don’t think that there is any other time that we expect them not to continue doing better. We are expanding horizons, in terms of preparing the athletes or taping their talents by using their current county governments. We are urging them to put up structures in their counties, make sure that their sport ministers go there and participate in the search for the talents. As you can see, we are now diverting from mid and long distance and going to other areas that we have not done before. Most of our young athletes are now doing well in other areas, such as in hurdles, javelin, long jump and things like that. So I think the future of Kenya is great. And what we need to do is to conquer the Olympics. Once we do that we will be on top of the world.

Looking at the days of Esther Kavaya, you remember the lady who used to run sprints, we have Nigeria, you know Ghana. Why can’t you nurture our athletes? You know it is a long time since we had Kavaya. Are you doing something so that we get hundred, two hundred metres and possibly more four hundred and relay?

You know that there are certain events which are very difficult to nurture in the country. Sprints are one of them. Particularly, sprinters don’t just require running on the grass or on the road. Unlike the mid and long distance runner, they require more than that. They require a gym, they require a swimming pool, and other equipment. It is not like those days when people would go run and win a hundred metres, now you have to go scientific, and being that you must put in a lot of investment. And that’s why we are asking the government of Kenya to provide the facilities. And I am glad that the Jubilee government said that they are going to put aside five stadiums every year. And we are looking forward to that and we are going to start with three. Once that is done then we would need other facilities within the stadium, the swimming pools, the gyms and so forth. Once we do that, I can assure you, if you look at the current situation, most of the athletes will be taking on sprints and I am sure that at the all African games, you will see our sprinters doing well.

There is this issue of doping. They have been talking a lot of bad things against Kenya in Europe how do you react to that?

First of all, what has come out from Europe is not true. I can see from the German TV, those were exaggerations. And they always come up when we are going for major events like the Olympics and the world athletic championships. But the few that we know, we have taken action. Now the government has formed what we call Anti-Doping Agency of Kenya. We are working with that to be able to penetrate and find out how we can deal with theissue of doping.

Isaiah Kiplagat is the chairman of the Kenya Athletics Association.

Avaya to open research and development centre in Egypt