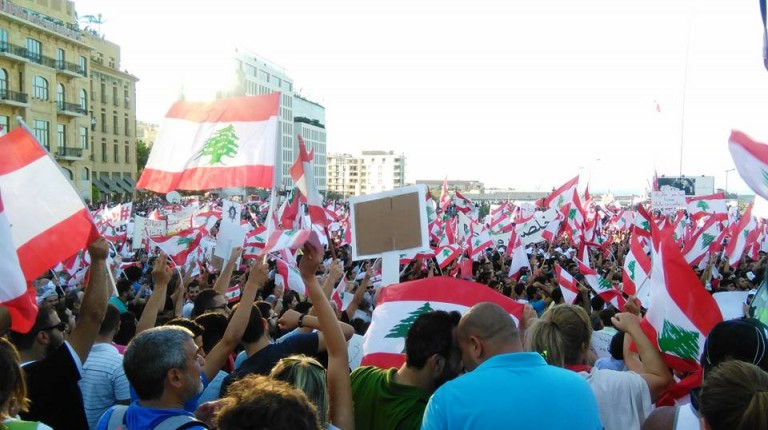 Local anti-harassment initiative Harassmap denounced in a Tuesday statement the Egyptian media’s commentary on Lebanon’s recent protests as shameful, as it focused solely on Lebanese female protesters and their outfits.

The initiative emphasised that unprofessional media coverage reduces the crime of sexual harassment into a joking matter, and is becoming a way to attract an audience by inciting their sexual instincts.

“Some media outlets hosted unspecialised people to talk to the public on the crime of sexual harassment, for example, groups that call on men to control women’s clothing or to punish them based on their physical appearance,” the statement said.

Lebanese newspaper Al-Akhbar published an article Monday heavily criticising Egyptian media for its skewed reporting on the Lebanese protests. Al-Akhbar also noted the narrow focus on the bold statements held by protesters in the streets and the “female protesters’ beauty”.

The article saw Egyptian journalists’ coverage of the Lebanese crisis as lacking the element of serious reportage and analysis, and reducing the crisis in Lebanon to the issue of the rising scale of uncollected rubbish.

“The policy of turning a blind eye to the complexity of the situation summarises what has appeared in the Egyptian press on the Lebanese protests, and more importantly it is a policy employed by Egyptian media to distract public opinion from the depth of what is happening,” the article read.

News of the Lebanese protests circulated social media in the past week, with observations and comments increasingly focusing on the Lebanese female protesters and their revealing clothing. The comments and media coverage were accused of being “sexist” and degrading to the Lebanese movement.

Some Lebanese activists and protesters responded through videos and Facebook posts to the “sexist” comments and coverage made by some media outlets and media personnel.

Harassmap called on Egyptian media personnel to upgrade the level of discussion on the crime of sexual harassment, and to avoid unprofessional coverage on the issue, which only serves to make the realisation of a society that rejects sexual harassment more difficult.

Thousands of protesters from across Lebanon converged on downtown Beirut on Saturday. Amidst tight security, the demonstrators waved Lebanese flags and gathered at the city’s famous Martyr’s Square.

Saturday’s event was preceded by similar demonstrations, which spiraled into violence when protesters clashed with police, as part of the “You Stink” campaign to express anger over the mountains of uncollected rubbish piling up in the city.