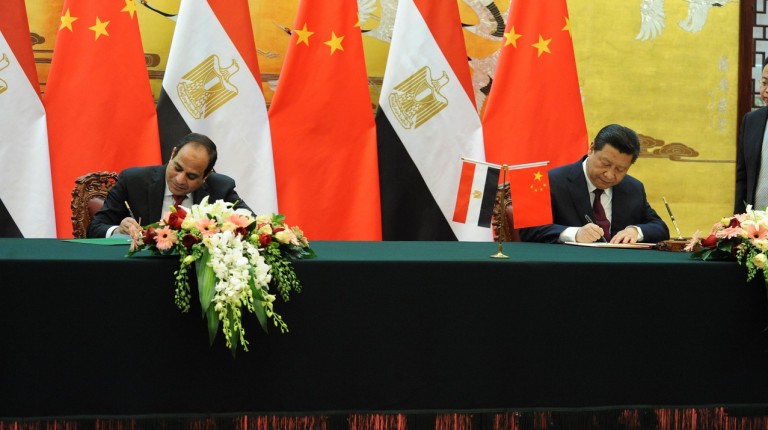 Egypt’s President Abdel Fattah Al-Sisi paid an official visit to China on Tuesday as a part of his Asian tour, to increase Chinese investments in Egypt. It is anticipated that Al-Sisi’s visit will have great impact on the bilateral economical cooperation between Egypt and China.

Al-Sisi held talks with his Chinese counterpart Xi Jinping, which led to the signing of a Comprehensive Strategic Partnership Agreement and a cooperation deal that will boost production capacity, state news agency MENA reported.

Ahmed Bahei, political researcher at the Al-Ahram Centre for Political and Strategic Studies (ACPSS), told Daily News Egypt: “It is an important visit that followed Al-Sisi’s first visit to China by less than 10 months, which indicates strengthening the relations between the two countries.”

The two presidents agreed on many projects in the power, transportation and ports sectors, with Al-Sisi also pushing to finish the paperwork and feasibility studies to put these projects into action.

A $100m loan from the Chinese Development Bank (CDB) is expected to be secured, to provide the small- and medium-sized Egyptian projects with the necessary funds.

Presidency office spokesperson Alaa Youssef said, in an official statement on Wednesday, that Al-Sisi encouraged Chinese companies to invest in Egypt, especially after the construction of the New Suez Canal economic zone that enriches the investment opportunities.

“The New Suez Canal area will give the Chinese side more opportunities to invest in Egypt and other countries,” Mahmoud Allam, Egypt’s former ambassador to China,  told official Chinese news agency Xinhua.

A total of 81 Egyptian officers will take part in the celebrations of China’s 70th anniversary celebrations of WWII Victory Day on Thursday. “This will be a chance to exchange opinions about terrorism, the Syrian and Yemeni crisis and Islamic State ‘IS’ terrorist activities in Iraq and Syria,” said Bahei.