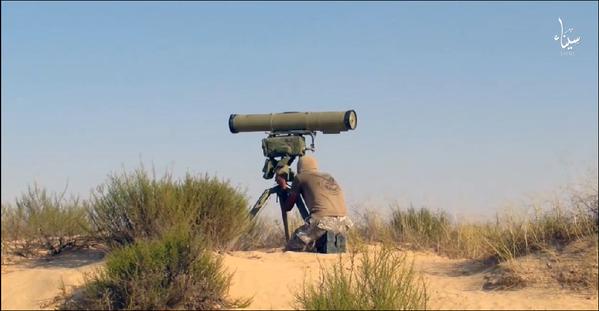 A new video released by “State of Sinai”, the peninsula’s “Islamic State”-affiliated militant group, documents a number of sophisticated operations on Egyptian army targets and appears to show the group’s capacity to move with alarming freedom through areas of North Sinai.

Militant groups in Egypt, and primarily “State of Sinai”, have capitalised on an absence of media coverage and hard information about the army’s fight to contain the insurgency in the peninsula, releasing videos of attacks that portray themselves as succeeding without difficulty.

In certain scenes of the new video, convoys of around 12 pick-up trucks converted to carry heavy machine guns parade through what seems to be rural and semi-urban areas of North Sinai. The video also shows an attack using explosives on a police station in the town of Sheikh Zuweid, as well as the launching of a missile that struck a naval vessel in the Mediterranean in July.

The video begins by focussing on Egypt’s relationship with Israel, saying that it is “apostasy that has been ongoing for years”. It calls Sinai the “southern gate to Al-Quds” and promises to “give hell” to those who have wronged Muslims. It also says that the events of the past four years in Egypt led to the “democracy of infidels” in which Islamist and Salafist pretenders entered in to power, as it displays a picture of former Muslim Brotherhood president Mohamed Morsi and US Secretary of State John Kerry.

Despite mounting attacks across the country, Egyptian army officials and the government maintain they are winning the fight against militants. The army has not made any statement on Tuesday’s video.

Michael Horowitz, a security analyst and member of The Levantine Group, told Daily News Egypt Wednesday that the video’s apparent documentation of militants using Kornet missiles is “concerning” as it is one of the most advanced anti-tank missiles in the world. The Russian-made missiles are believed to be the type used against the naval vessel struck in July, as well as several tanks and armoured vehicles. “If these videos are indeed from Sinai, which it seems they are, then ‘Wilayat Sinai’ may have received some military training, possibly from militants in Iraq or Syria, or maybe even from militants in Gaza,” Horowitz said.

On 1 July, Egypt’s army faced the most significant militant attack it has ever confronted in the peninsula, which, according to government figures, claimed 21 army personnel’s lives. During the operation, a police station in the town of 60,000 people confirmed to Daily News Egypt that it was under siege.

Egypt has used its fights against militancy as justification for the purchase of weaponry, including 24 Rafale fighter jets from France as part of a €5.2bn deal, and to make the case for the resumed aid of F-16 fighter jets from the US.

“The video purportedly depicts the use of an anti-aircraft missile, likely an SA-18 Igla, which is very notable given the Egyptian military heavily relies on airpower,” Horowitz said. “It does not show the impact of the missile, suggesting the target was not hit, and more broadly that the group may not have undergone significant training focused on the use of anti-aircraft missiles.”

IS in Sinai appear not only to be well-equipped, but also increasingly coordinated, enabling them to carry out military operations such as the one in Sheikh Zuweid on 1 July, Horowitz said.

He continued that the release of highly produced media are often used by IS to demonstrate that their ‘fight’ is entering a new phase and differs from the media-shy tactics Ansar Beit Al-Maqdis used to demonstrate.

“That said, we should also keep in mind that these kinds of ISIS ‘blockbusters’, are also meant to amplify the threat, and use these videos to amplify the psychological impact of their attacks.”