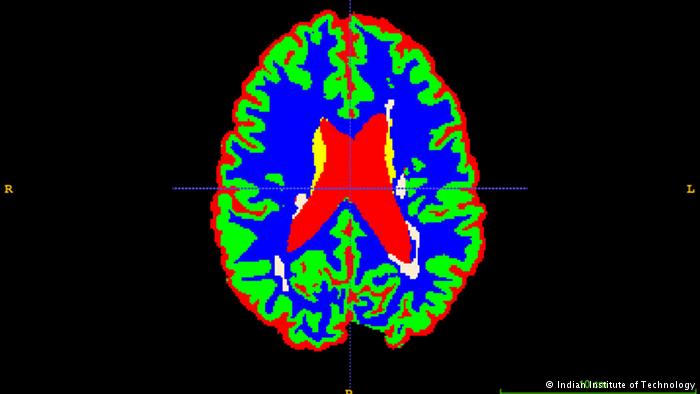 Engineering students in India have developed an algorithm that can help detect multiple sclerosis, or MS, a chronic disease that affects the nervous system at an early stage. DW’s Murali Krishnan reports from Chennai.

He is 59 years old, and he has spent the last 18 years battling MS, a disease which is on the rise throughout the world.

MS has increased in India in recent years. Estimates range from between 100,000 and 200,000 such patients throughout the country. Worldwide, the number is roughly 3 million.

Malakar, who is also the honorary secretary of the Delhi chapter of the Multiple Sclerosis Society of India, sees reason for some optimism, however, in a new study

“Early detection is important so that your treatment can start much earlier,” he told DW. “The earlier you detect a debilitating disease like MS, the better for the treatment to start. They have done marvelous work.”

Malakar was referring to engineering students from the Indian Institute of Technology (IIT), located in the southern city of Chennai, who have developed algorithms using artificial intelligence that will help to improve diagnosis and treatment of glioma, a malignant tumour of the glial tissue of the nervous system – but also MS.

“These algorithms can be used for automatic analysis of MRI images in large-scale clinical trials and research studies,” says Ganapathy Krishnamurthi, professor in IIT’s department of engineering design. “What we have developed is a technique that will develop fast evaluation of therapeutic techniques using imaging modalities – especially MRI.”

The accuracy of these algorithms, he adds, has been evaluated independently.

The primary research has been to develop algorithms that separate the images of tumors or lesions from the background. This would help machines identify lesions and troubled spots in the images and define them from the rest of the image.

The team has used a technology known as “Deep Learning”, which is inspired by advances in neuroscience and is loosely based on the understanding of information processing and communication within the nervous system.

It is an advanced branch of study called “neural networks” that seeks to enable machines to simulate human beings in recognizing pictures and sounds through interpretations of how the brain processes them.

Suthirth Vaidya, a team member and student from the engineering design department, believes the algorithm is already ready to be put to use by doctors on large data sets on a day-to-day basis, even if it currently remains in testing mode.

“Right now, our algorithm has been evaluated on a very small data set and based on that we are able to tell that this algorithm is doing well and giving us good results,” he told DW.

While human beings can easily identify a person in different photographs, to enable a machine to do so requires a very complex algorithms. Once these algorithms are in place, the accuracy in recognising the images becomes much better and faster.

“The next few steps would be to gather as much as data as possible and then clinically evaluate how effective the algorithm is… in putting it to practical use,” Suthirth says. “Once that is done we will get the regulatory approvals and make it commercial and allow hospitals to use it on a widespread scale.”

He and his colleague Abhijith Chunduru were part of the team that won the Longitudinal Multiple Sclerosis Segmentation challenge at the International Symposium on Biomedical Imaging in New York some months ago.

Chunduru believes it would be possible to bring down the cost of diagnosis of MS.

“This would help radiologists make very quick analysis and get quantitative numbers on how quickly or slowly the disease is progressing within patients,” says Chunduru.

MS is the most widespread disabling neurological condition in young adults around the world. One can develop MS at any age, but most are diagnosed between the ages of 20 and 40.

Researchers still do not fully understand the causes of MS, or why the rate of progression is so difficult to determine. Radiologists have, however, discovered that rates of MS are higher farther from the equator.