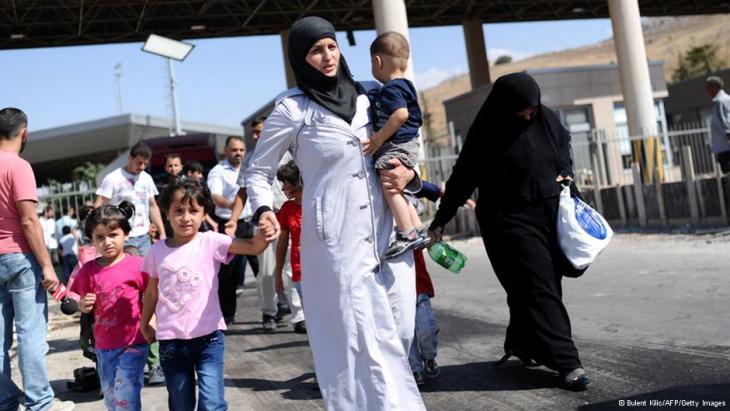 Egypt’s Ministry of Foreign Affairs has spoken critically about the treatment and support of migrants in Europe, as thousands flock to the continent in pursuit of safety and prosperity.

In the statement, issued Friday, the ministry expressed “Egypt’s grave concern towards the difficult humanitarian situation afflicting refugees in a number of European countries.” The statement called on countries to “live up to their responsibilities, consistent with their international obligations” on receiving and protecting refugees fleeing from dire humanitarian and security crises “in accordance with the principles of international humanitarian law”.

Europe is facing its largest refugee crisis since the Second World War as thousands of refugees fleeing countries such as Syria and Eritrea arrive daily, but states including Hungary and the UK have responded primarily by seeking to avoid resettling the migrants.

Germany, which is expecting 10,000 migrants on Saturday alone, has led the way in providing support for refugees. In August, the country announced it was suspending the Dublin Regulation, meaning that refugees arriving in any European state can apply for asylum in Germany, as opposed to the one they land in.

Egypt also called upon Secretary-General of the United Nations Ban Ki-moon, and relevant UN bodies, “to fulfil their obligations towards these vulnerable groups of refugees, who have fled to these countries searching safety and basic survival needs”.

Despite the Ministry of Foreign Affairs’s statement, Egypt has also faced criticism for being a country difficult and hostile towards migrants.

“Over the past two years the situation in Egypt has become increasingly precarious and refugees from Syria have faced discrimination and human rights violations,” wrote Amnesty International Egypt researcher Mohamed ElMessiry in an August report. “They have been subjected to verbal attacks and threats in the media and by public figures, to arbitrary arrests and detention and, in some case to forcible deportation to Syria or other neighbouring countries in the region.”

Whilst Egypt’s officials have publicly talked of dealing with ‘humans… not criminals’, the situation in Egypt has become “so desperate that some take the huge risk involved in an irregular sea crossing to Europe”, ElMessiry said.  According to Amnesty, around 300,000 Syrians live in Egypt, of which around only around half are officially registered.

As a significant point of departure for migrants too, Egypt has faced condemnation for using a “shoot-to-stop” policy to halt convoys. Policies of deportations and mass returns to countries where refugees may face persecution as well as extended periods of detention have been highlighted by critics.

In the August report, Amnesty documents the story of a Syrian family who attempted to leave by boat from the Mediterranean coast near Balteem. The father recounts that the family lived in Egypt for almost three years, but says they have found “life here in Egypt is unbearable” owing to no employment and limited access to education and health care. The family attempted to take a boat of almost a hundred refugees but were apprehended by the military on the beach.

As the soldiers attempted to halt the migrants they shot bullets which killed the man’s eight year old daughter. The father says the military provided no attempt to call an ambulance or medical support for three hours, verbally insulted the family and kicked the man and his dying daughter.

Amnesty International now believes that the Tanta Military Prosecutor has opened an investigation into the killing of the child but they have been unable to find further information.

There have also been reports of Egyptian soldiers firing on smuggling vessels headed for Europe that are carrying Palestinians fleeing Gaza after the 2014 conflict with Israel.

Some observers point out that, as a signatory to the 1951 Refugee Convention, Egypt should not deport refugees or asylum seekers to any origin country where they may reasonably fear persecution or harm to their freedom. Still, Egypt regularly deports Sudanese back to Khartoum and has also deported Syrians and Palestinian-Syrians back to Syria since the beginning of the civil war in 2011.

Many migrants who are apprehended are detained for extended and arbitrary periods of time. According to information reported by the Global Detention Project, unauthorised migrants are often charged with criminal violations stemming from their alleged irregular status and are then incarcerated in inadequate prison facilities.

GDP continues that while it appears migrants are often prosecuted for status-related violations, they tend to avoid imposing criminal sanctions, and instead keep migrants in a form of administrative detention until they can be deported or released.

In one example, 73 Syrian and Palestinian refugees were held at Karmooz police station in Alexandria after their boat which left from Turkey for Italy was taken to the Egyptian coast. In June, 42 were accepted by Germany, and the remaining 31 were taken by Sweden and France after delegations from European countries visited the station and made the decision to help them.

The refugees were investigated by Prosecutor General who ordered their release and dropped charges against them on 5 November. However, the refugees, including 15 children, were held at Karmooz police station without charge until their June release.

In a March statement, local rights groups said: “Their detention contravenes Egyptian Law, while it denies them at the same time the ability to legally challenge their detention.”