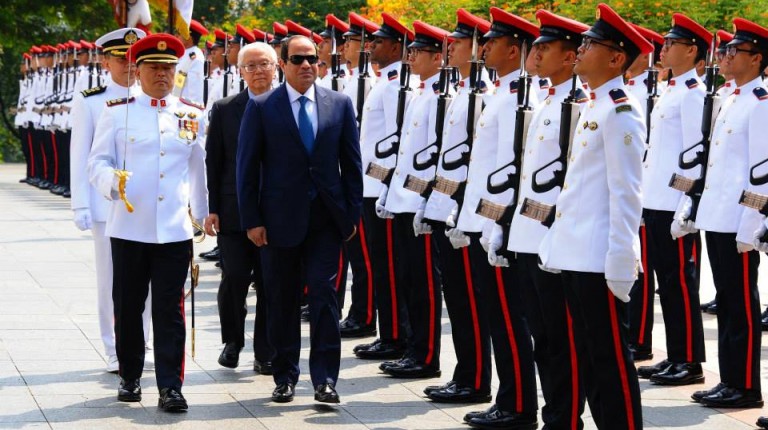 President Abdel Fattah Al-Sisi left Jakarta on Saturday after a 24-hour visit to Indonesia during his one week Asian tour. Al-Sisi is the first Egyptian president to visit Indonesia since 1983.

During the presidential meeting, Al-Sisi and Indonesian counterpart Joko Widodo agreed to support the joint coordination to counter terrorism and extremism, highlight the true image of Islam, promote economic and trade relations, increase investments on both sides and counter the problems in the Middle East.

At the end of the meeting, Al-Sisi invited Widodo to visit Egypt.

Al-Sisi also met with the Secretary-General of the Association of Southeast Asian Nations (ASEAN), Lee Luong Minh, to promote economic cooperation with all members of the ASEAN.

The Indonesia visit was part of an Asian tour by Al-Sisi which began a week ago, and included China, and Singapore. In his visit to China, he met with representatives from Huawei Technologies, as well as his Chinese counterpart Xi Jinping and Chinese Prime Minister Li Keqiang. He also attended a military parade in China’s capital, Beijing, to commemorate the 70th anniversary of the end of World War II.

In his visit to Singapore, he met with his Singaporean counterpart Tony Tan and Prime Minister Lee Hsien Loong. Al-Sisi’s meetings with the Singaporean officials “reflected Egypt’s interest to enhance relations and benefit from Singapore’s wide experience in a number of areas, including port development and management, improving the quality of public and technical education, and management of water resources and water desalination”, according to a presidency statement.

Al-Sisi explained foreign investment policies to foreign investors in Singapore during his visit. He also went to a religious centre in the capital and a water desalination and power generation station.