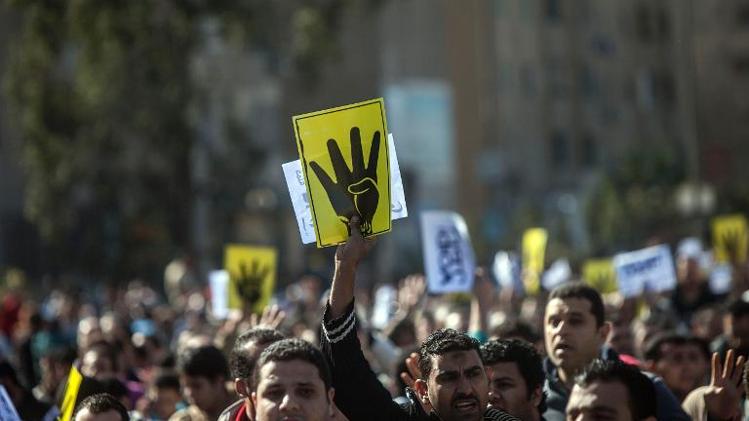 The Administrative Court postponed to Tuesday a lawsuit that calls for disqualifying candidates who raise the ‘Rabaa sign’ or use the ‘Rabaa’ slogan in any media channel as part of their electoral campaign, state media reported.

The lawsuit, filed by Lawyer Ali Ayuob, considered the ‘Rabaa’ sign a slogan of the banned Muslim Brotherhood. The sign refers to the pro-Mohamed Morsi Rabaa Al-Adaweya sit-in that was forcefully dispersed in August 2013, claiming the lives of hundreds.

The lawsuit is filed against the head of the Supreme Electoral Commission (SEC). It mentions that the presence of Brotherhood members in the parliament poses a threat to national security “as it upsets the Egyptian people who carried out the 30 June revolution and sacrificed many martyrs to remove their regime from power”.

The lawsuit is premised on Article 237 of the Egyptian constitution, which stipulates: “The state shall fight all types and forms of terrorism, and track its funding sources as a threat to the nation and its citizens, within a specific timeframe, while guaranteeing basic rights and freedoms.”

The Muslim Brotherhood was designated a terrorist organisation in December 2013, and its members are banned from running in elections or participating in political activities.

Much of its leadership are currently held in Egyptian detention facilities and face multiple trials on charges that include treason and murder.

The political wing of the banned Muslim Brotherhood, the Freedom and Justice Party (FJP), was dissolved by an order from the Supreme Administrative Court in August 2014.

The court decision to ban the party came at the official request of the committee governing the activities of political parties. The ruling to dissolve the party also ordered the seizure of FJP property and finances.

The SEC announced that parliamentary elections will start in October, and will be divided over two phases. Accordingly, the parliament will be established before the end of the current year.

Following the ouster of former president Mohamed Morsi in July 2013, a security crackdown ensued that includes arrest campaigns and banning Brotherhood-affiliated organisations. Hundreds are behind bars, either serving sentences or awaiting trial.

The sit-ins organised by Muslim Brotherhood members and supporters in Rabaa Al-Adaweya and Nahda Squares following his ouster were forcibly dispersed by security forces on 14 August 2013. The dispersal was followed by mass arrests.

Since then, ‘Rabaa’ became a symbol of resistance for those who took part in the protests and sit-ins that followed the military-backed ouster of Mohamed Morsi.