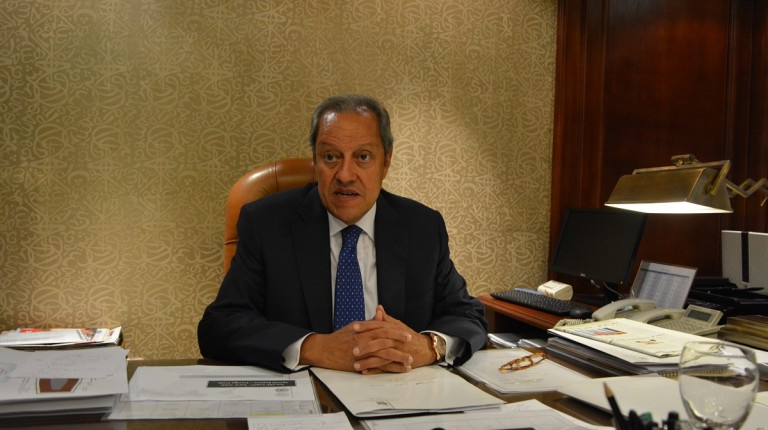 What is your opinion on the Euromoney conference, and what is the ministry’s agenda at the conference?

I will not participate at the conference as I will be travelling to China and then to Tunis with Prime Minister Ibrahim Mehleb, to attend a joint Egyptian-Tunisian committee. It is possible we will form the Egyptian-Saudi Committee, because the King of Saudi Arabia, Salman Bin Abdul Aziz Al-Saud, will be in Egypt on 7 September. The committee will discuss trade and economic relations linking Egypt and Saudi Arabia. The Euromoney [conference] is held this year in a situation where there are turbulent world markets, and I hope that on the day of the conference the markets are stable. The crisis appears to have affected China, and the consequence is the decrease in demand of China goods and the reactions of world stock markets.

Some believe that Egypt is included in a new global slowdown, what is your opinion?

Of course, because Egypt is not in isolation from the global economy, and thus the economy is definitely influenced. However, it is important to take the necessary measures to avoid this crisis and exploiting this crisis to take advantage. The Economic Committee met on 24 August, and discussed Egypt’s situation and the actions that must be taken. A large part of the cabinet meeting on 26 August touched on this subject and the actions that will be taken.

Will the crisis affect the targeted industrial growth this year?

The ministry targeted 9% of industrial growth. Certainly, the crisis will affect foreign direct investment (FDI), and that depends on the depth of the crisis and its continuity, which will reduce the benefits and especially the benefits of friendly countries, especially as some Gulf states suffer from shortages due to a decrease in the petroleum prices. For example, the Saudi budget achieved a deficit because of the low price of a barrel of oil, from $100.6 to $44.

What is the ministry’s interpretation of the drop in Egyptian exports?

There is a difference in the figures received from the General Organization for Export and Import Control (GOEIC), and the figures from the Central Bank of Egypt (CBE) on incoming and outgoing transfers, on the real balance of exports and imports. According to the CBE data, there is no decline in the non-oil exports, but a decline in oil exports. The are some reasons for the decline – in the energy crisis, in particular, there is a problem with the gas-based plants like fertiliser plants which are suffering from an energy crisis, as well as iron and steel industry. Egypt was exporter to the iron and steel but now it largely imports. The third reason is the exchange rate, as the Egyptian exchange rate rose in front of all currencies except the dollar, which means that the ability of Egyptian products to compete at home and abroad has declined. Meanwhile, there are many claims that the new export system affected the imports badly, although these allegations are not true, but the new system of export support has not been implemented and will not be implemented.

What do you think on the delay of exporters’ dues to support exports and the CBE’s policies regarding the delay of opening of bank credit?

In June, the Ministerial Economic Committee agreed to increase the amount allocated to supporting Egyptian exports from EGP 2.6bn to EGP 5bn in the new state budget, representing an increase rate of 92%. Due to the pressure on the budget, the government kept the amount of EGP 2.6bn and added EGP 1.1bn to bring the support total to EGP 3.7bn. The government provides 1/12 of the amount (EGP 170m) monthly. In July, the ministry received the EGP 170m, and in August, the ministry got EGP 400m for the disbursement of arrears.  We demand that the government provides the exporters the amount of EGP 5bn. With regard to the CBE’s policies, the CBE is a completely independent body. According to the law, there is a committee coordinating between fiscal and monetary policies supervised by the Prime Minister, which should match the market policies, but the committee met once since its establishment in 2004-2005.

Will the government impose tariff adjustments on all imported goods?

The government is considering the imposition of customs on all imports except iron, as we fear the impact on the consumer. In addition to this, there are free trade agreements with Turkey, China and the Ukraine, from whom Egypt imports iron.

Regarding the energy crisis and its impact on some industries which affects the export process, in your opinion when will this crisis end?

The government has given priority to the domestic sector at the expense of the industrial sector, affecting some industries and some exports, besides our increased imports of some goods. I repeat that this is wrong decision.

The government has already received too many offers; there are offers of ships supply stations, offers to finance the Russian industrial area north of Ataka, TEDA area in the northwest of the Gulf of Suez, and the second phase project of the Jushi Egypt Fibreglass Company. The Suez Canal is the lifeline for many countries of Eastern Europe, Asia or the West, due to its unique situation alongside with other attractive areas in Egypt. There are some investments opportunities besides the Suez Canal project, like the Golden Triangle Project, with its plan to be conducted in February 2016 due to its favourable geographical situation on the Red Sea. Besides this, there will be the establishment of phosphate and fertiliser manufacturing plants rather than export them without any additional value.

What are the main projects that will be debuted in the Upper Egypt Development Conference?

The Golden Triangle project is the main project of this conference – this aims to create new industrial and mining projects in 6,000 sqkm extending from the Red Sea cities of Safaga and Al-Qusayr to Eastern Qena in Upper Egypt. The Italian consultancy D’Appolonia Company, which has prepared a study and master plan, has confirmed that by October it will provide the main lines of the project, including industrial projects in the region. Besides this, mining, agricultural and tourism projects can take place in that region.

What’s new in the automotive industry strategy? When it will be issued?

The delay is due to careful and in-depth consideration in partnership with the Ministry of Finance. The strategic plan has been completed, but there are two stages which are currently in progress. First is defining the rates and figures of the strategy, and the second stage is transferring the strategy into law in the next phase. The independent law of the automotive industry , will include incentives will be awarded for manufactures that will achieve the goals of increasing the production, exports increase in percentage will be determined by the law, and increase the local component, which also will be determined. The law will be submitted to the ministerial group in September to be discussed and then submitted to the cabinet and after that will be submitted to the President of the Republic.

Are there talks about the new mechanism replacing the CIQ certificate?

The CIQ has been cancelled, and the new mechanism matches imported goods to the Egyptian or international standards, and we will firmly deal with shoddy goods, which have swept through the Egyptian market and negatively weighed on the trade balance and negatively affected the consumer’s interest.

Is there a crisis in the cement supply?

Currently, we don’t have shortage in the cement supply. It is sufficient as the Armed Forces have built three new cement production lines. However, the problem is based on the licence conditions. The government is still studying the conditions of cement licences, but there has been no result so far.Will the government impose new taxes on some goods?

The government will issue the value added tax (VAT) law in the next week, after having submitted it to the Ministerial Economic Group and then having submitted it to the prime minister [Ibrahim Mehleb]. The law is ready and the ministerial group will meet every day until the completion of the small details of the law proposal. It is a difficult law, but it is important.

Will the issue of freezing assets belonging to Juhayna owner Safwan Thabet and referring Oriental Weavers owner Mohamed Farid Khamis to the prosecution on charges of monopoly, affect the flow of investments in the Egyptian market?

We can’t put both cases in the same pot. Farid Khamis’s case is subject to the Egyptian Competition Authority (ECA), which is an independent body investigating the case and proving violations, and thus it is different from Safwan Thabet’s case.The law is applied regardless of the country’s circumstances or promoting the economy. The case of Thabet is a security case, and I won’t comment on it. My hope is that the decision to freeze assets is based on valid and justifiable information. There is of course a possible impact on foreign investments in Egypt, but also the lack of security decreases investments and the government must convince investors that it is able to maintain security.

How do you see the crisis preventing cotton imports?

When the minister of agriculture issued the decision to ban cotton imports, the decision had not been studied well. We have a stock of cotton and also import it, but the local cotton is not a substitute for imported cotton, and for the past 25 years, we have offered more cotton than what is demanded. This year, conditions will help us to solve the problem of the cotton stock. According to my follow-up, the only competitor to Egyptian cotton is American cotton, of which 95% is produced in California. Cotton agriculture there depends on rain and California didn’t witness rain this year, which caused a decrease of cultivated areas and the production did not exceed 100,000 acres, compared to 500,000 and more in previous years, and this led to the demand for Egyptian long-staple cotton. Moreover, the government has provided a subsidy of EGP 1,400 per planted acre for the farmers to stock cotton, and if the farmer needs support, it will be provided from the state’s public treasury.

Do you expect MoUs or agreements to be signed on President Al-Sisi’s visit to India?

Yes, we expect the signing of a number of MoUs. President Abdel Fattah Al-Sisi will be in India on 29 October, and the joint Egyptian-Indian Committee would meet in the period from 22-29 October, the dates of the president’s visit.

What are the developments regarding the joint tripartite agreement between the main three African economic blocs, which signed on initials in June in Sharm El-Sheikh?

There are some issues pending and have to be completed before ratification, including the unification of the rules of origin, tariffs and other small details of the agreement, and there is no news so far.

Has the ministry opened new commercial services offices in Africa?

The ministry has announced it will open three new offices in Africa, and will close some commercial services offices in some countries in order to save costs and re-distribute other offices. Closing one office in Western Europe opens three offices in Africa. The Montreal office in Canada and the Copenhagen office in Denmark are being closed in preparation for opening in Africa.

Are there negotiations between the ministry and the African Development Bank (AfDB) to boost Egyptian exports to Africa?