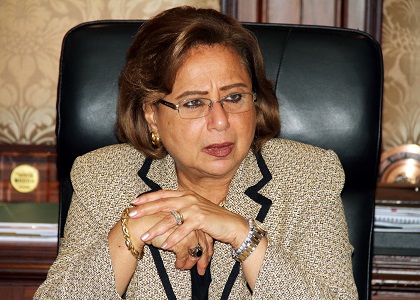 Egypt has completed negotiations with the European Bank of Reconstruction and Development (EBRD) officials to issue a declaration this September turning Egypt into a country of operations, according to Egypt’s Minister of International Cooperation Nagla El-Ahwani.

El-Ahwani told Daily News Egypt that making Egypt a country of operations will contribute to raising the EBRD’s financing portfolio in Egypt to €2bn, compared to the current amount of €1bn.

What is the total size of the Arab cooperation portfolio?

The size of cooperation portfolio, funds, and Arab financing institutions combined is approximately $10bn during the current year. There is great cooperation with international financial institutions in general, and Arab funds and institutions in particular. The ministry, as a national coordinator, aims to bring development aid to Egypt in the form of loans, grants or training. The size of the portfolio of cooperation combined with the Arab Fund for Development amounted to $1.9bn. Dealing with the fund is based on a framework that governs its relation with Egypt during a fixed number of years, mostly two years, and projects in need of funding during the agreed period.

What about the Saudi Fund?

The Saudi Fund portfolio with Egypt amounted to $455m. The Kuwaiti Fund is $1.1bn. They are used to finance a number of projects in health, education, sanitation, irrigation, drinking water, infrastructure and housing. The Islamic Development Bank has been cooperating greatly with the Egyptian government during the last period in funding facilities projects. The cooperation portfolio amounted to $2bn during the current year.

The cooperation with the Abu Dhabi Fund for Development is limited at the moment, although there is a framework agreement with the UAE that was signed in October 2013. The agreement includes the provision of many of the grants for health, education, drinking water, and silos projects. The cooperation portfolio is very diverse, and a big part of it is based on infrastructure sectors – in electricity and transport. The volume of cooperation in the framework agreement with the UAE has amounted to approximately $4.5bn so far, provided as a non-refundable grant.

Are there consultations to increase the World Bank loans portfolio?

The total loans portfolio of the World Bank to Egypt amounted to $5bn by the end of August. A new four-year agreement is now being negotiated. This agreement will fund some infrastructure projects in Egypt, which are currently being studied in coordination with the bank. The World Bank has recently raised its financing portfolio to Egypt to reach nearly $2bn per year, instead of $1bn. The World Bank is interested in working in Egypt, in addition to seeking to diversify its portfolio, and double it in the coming years.

What about the African Development Bank?

How far along are the consultations with the EBRD on the conversion of Egypt to a country of operations?

The EBRD is about to make a decision this September on Egypt’s request to become a country of operations to increase the financing portfolio.  Turning Egypt into a country of operations will increase the financing portfolio to €2bn, instead of the current €1bn. The bank is interested in education and encouraging the private sector and small- and medium-sized enterprises (SMEs). The EBRD’s loans for reconstruction are directed to the private sector and banks, not to the public sector, provided the state’s approval, represented by the Ministry of International Cooperation, is gained.

What about the new negotiations conducted by the ministry?

There are ongoing negotiations with the Japan International Cooperation Agency (JICA) to secure a loan of approximately $400m, as a second stage to finance the Grand Egyptian Museum. The government is seeking to increase cooperation with the French Development Agency (AFD) in the coming months. The AFD represents the French government’s financing tool. Several agreements were signed with the EU during the Economic Summit. These agreements, worth €250m, are in the form of grants to finance health, education, training and supporting youth, and financing SMEs.

How do you see current Egyptian-Chinese relations, and future cooperation?

The ministry is currently working to increase cooperation with China. The relations between the two countries have improved greatly during the last period. The government was able to sign memoranda of understanding (MoUs) with many Chinese private sector companies, as well as government financing institutions. The partnership level between the two countries has been raised to strategic. Now, the cooperation is conducted directly between the presidents of the two states, in the signing of contracts and MoUs.

President Abdel Fattah Al-Sisi was able, during his recent visit to China, to convert four MoUs into binding contracts. Three projects were signed in the field of electricity, to increase the national network’s efficiency, in addition to another project at a cost of $1.5bn for the express train project linking Bilbeis with 10th of Ramadan City. The ministry is currently negotiating with investors about the necessary funding for projects. Some investors have expressed their willingness to provide direct investment.

The government is about to receive a loan from the Exim Bank of China to finance the express train and electricity projects.

What about the Suez Canal Axis Development projects?

The government will complete the final image and projects planned for the centre of the Suez Canal during the next two months, to be put in front of investors before the end of the current year.  Some infrastructure projects will be negotiated with Arab and international financing institutions to get the needed financing packages, in addition to the contribution of the private sector. Many foreign investors are willing to pump direct investments into the new Suez Canal projects, and we are awaiting their announcements. The Suez Canal Axis Development projects will be diverse and effective in supporting the national economy. They will range between electronic industries, micro industries, textile, and electronic devices, in addition to the giant touristic, logistics, and shipbuilding projects.

How does the ministry view the results of the Economic Summit held last March?

The Economic Summit resulted in the signing of investment agreements worth approximately $60bn. Some of them are being implemented now. The ministry is following up on the MoUs and framework agreements with concerned parties to work on converting them into binding contracts in the coming months. There are five MOUs that have been converted into binding contracts during the last period, three of them in the field of housing and two in the electricity sector.

What about the next Economic Summit?

What about the ministry’s efforts to raise Egypt’s international fund portfolio?

During 2015, the ministry has succeeded in forming joint committees with many countries in order to cooperate with the international development community. This week, a joint committee will be held in Tunisia, headed by Prime Minister Ibrahim Mehleb. This will see negotiations on exporting Egyptian medicine and agricultural products to the Tunisian market. In addition, it will see discussions regarding the means of increasing cultural exchanges between the two countries.

What about the international arbitration of investors against Egypt?

International arbitration cases take considerable time for a decision. Such cases are not beneficial to both parties, whether the investor or the state. Parts of the disputes are in front of the Egyptian judiciary. The ministry cannot take any decisions until after the court’s ruling, as some of them are dealing with Public Fund Prosecution and the criminal court.

Amicable solutions with investors are often reached. Settling disputes is very good for both parties. Projects are considered the door to economic development. Implementing projects to push the national economy, employ youth, and maximise the state’s revenues via taxes is more important than compensation. There are seven international arbitration cases filed against Egypt by investors. The government successfully settled more than 17 cases. One of the most prominent international arbitration cases filed against Egypt was by a private multinational company to export Egyptian gas to Israel, after the Egyptian government stopped pumping gas to Israel.

Arab organisations speak out against EBRD