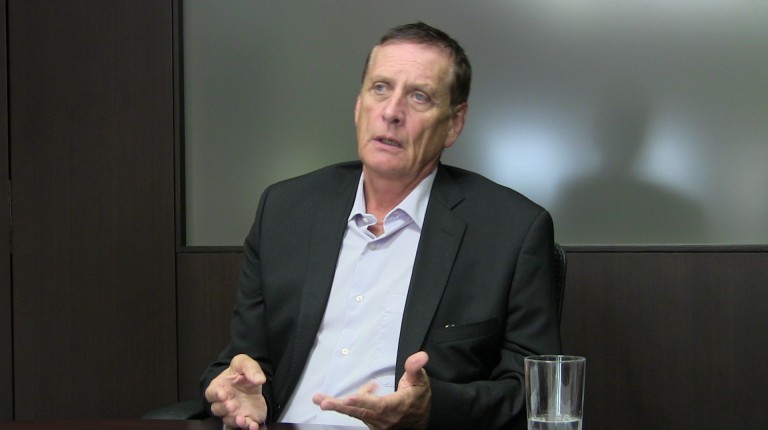 In an interview with Daily News Egypt, Mobinil CEO Yves Gauthier discussed the latest developments regarding the company’s debt restructuring process. Gauthier also tackled the status of and challenges facing the telecom market in Egypt.

How does Orange International evaluate the telecom market in Egypt?

It’s a big market, the country has around 90 million citizens. In terms of mobile subscribers, Mobinil represents roughly 30% of what we call the AMENA region, Orange Middle East, Africa and Asia. Mainly in Orange’s operations in Africa, Mobinil’s part in the African market is 30%. The population of Egypt is growing by roughly 1.5 million per year. For that, it’s a very promising market and obviously Orange will continue to invest and focus on this market.

What are the challenges facing Egypt’s telecoms market?

In total, there are currently more than 100 million subscribers in Egypt, and  in the future, it is likely that the data traffic will grow very fast, and we will need more frequencies. We will need frequencies of what we call LTE (4G technology) which is in the 2.6 MHz, but also in the 700 MHz range. In fact, I think the country needs to have frequency plan for the future, because broadband will eat up a lot of resources.

What are the most prominent axes in Mobinil’s strategy over the coming period?

In fact, the number of smart phones is increasing every day. They consume more mobile data with all video browsing and internet surfing. We need to have a network that can support the growth in data and that’s what we are doing. Afterwards, we also have new mobile usages such as mobile payment and other new services, what we call machine-to-machine services, making it connected directly to the network in order to send the information needed. We need to be ready to cover new usages.

What are the recent developments regarding Mobinil’s debt restructuring? Did the company decide to increase its capital?

First, we have completed a sale with Eaton towers, in which we sold them 2,000 communication towers. This cash will help to decrease the debt, and next year we plan as well to increase the capital.

What is the value of these towers?

The total value is around EGP 1bn.

How much do you hope to increase the capital?

This is not defined as yet, because this will depend on the regulations. For example, if the government will put new licences on sale for LTE, then probably we will increase the capital more to buy new licences, if not then it will be less. It depends on what will happen next year. It’s not yet clear what we are walking on to increase the capital, we have numbers but we cannot disclose these because they might change.

Mobinil previously said that it needs EGP 3bn to restructure the debt but now you have only EGP 1bn. What about the other EGP 2bn?

No, today Mobinil’s debt is EGP 7.9bn; if we reduce it by EGP 3bn it will give EGP 5bn. I don’t know exactly what will happen; it depends on what we will need to buy next year. Currently, Mobinil generates enough cash to sustain the operation. Furthermore, if there are new licences available, we will not be able to buy them without borrowing. I believe that this is not a good situation for Mobinil, that’s why I prefer to decrease the debt then we have new capacity to borrow.

Is there any negotiation going on with a local investor to contribute with Mobinil?

No, there are no negotiations.

Is there a financial counsellor providing advice on Mobinil’s debt restructuring process?

No, not yet. But, obviously, if we go back to the stock market, we will need some banks to sustain the operation. Today, no consultant has been hired.

Are you intending to go back to the stock market?

It’s one of the options to increase the capital, but it’s not yet defined. It will depend on the situation; we will take a decision at the beginning of 2016 when we will decide on what we will do.

Does Mobinil aim to cast aside the unused assets in a new deal?

We have no unused assets, and we don’t plan to sell more towers in 2016.

Does the company expect to achieve net profits next year?

How much will Mobinil investments reach in 2016?

The 2016 budget has not yet been finalised. We are currently in discussions preparing for the budget, and it will be finalised around November 2015. Usually, we invest between EGP 2.2bn and EGP 2.5bn annually, but I cannot say for next year exactly, as, if we will have to buy new licences, we will invest much more.

When will Mobinil’s trademark be changed? And how will you use it and its high value?

This has not been defined as yet, we are working with Orange on a plan, but the exact date is not yet defined. And if we rebrand, we will change Mobinil into Orange, and Mobinil’s trademark will disappear.

In some advertisements, you started to refer to Mobinil as a part of Orange, does that mean that you’re close to change the trademark?

It’s true, we are preparing, but also you could also have seen this message during the past three months, one year or more. We are preparing the fact that we are migrating Mobinil to Orange

Which solutions does Mobinil consider to transform “link” into a Profitable Company?

This doesn’t just depend only on us, if Telecom Egypt (TE) stops taking our customers when they [TE] install the fibres and disconnect our customers to migrate them to TE Data, it will help us not lose money. When the game becomes fair, if we have regulatory environment that allows other Internet Service Provider (ISP) than TE Data to gain money, we will gain money. Today in the market, just TE Data is gaining money, Link, Vodafone and Etisalat are losing money.

What is your opinion regarding decreasing infrastructure’s rent prices to Telecom Egypt?

TE has a monopoly on the market, if the prices are not regulated, they can put any price they want. Today, the price of the capacity is too high to have the chance to make money. Also it depends on what the country want, if the country want just one ISP or the country wants an open internet market. Now, if you look at the mobile market, roughly each operator has around 30%, Vodafone a little bit more, Etisalat a little bit less, but we are more or less in the same range. In the internet market, we have one company with 70% of the market share, and four companies sharing the remaining 30%. It’s obvious that the four companies are suffering.

The National Telecom Regulatory Authority (NTRA) announced that they would offer new Internet licences, how do you see that?

No, not the NTRA. I read in the press that there is a new company interested to join the market. I say if you want to lose money, join the club.

What is your opinion in retracting the decision to establish a national entity for infrastructure?

I was in favour of a national entity, to have an alternative to TE in applying optical fibres. There are different possibilities, first we can have a national entity, and the second is to allow the mobile operator to add their own fibres. Fibres are necessary when we add the LTE, you will have a huge volume of data so you need strong and faster transmission. When there is just one provider of fibres, they can put the price they want. As if there was just one mobile operator, I believe the price would have been higher. The reason that the prices are low is that there is competition. That’s why, if we have competition in the fibres, the price will be lower and there will be more fibres in the country.

Then you see it as a negative decision?

I don’t say it is negative, there are other alternatives. If they don’t establish this entity, but they give us the right to put fibre, then it’s fine. But they have to put other alternatives to TE to put down fibres in the country. If not, I think Egypt will suffer with a delay in deploying optical fibres, which is by the way extremely important, because we believe that the future of the industry and maybe the future of the country is to develop the broadband. And to do that you need to have a lot of fibres.

Do you expect the launching of 4G technology next year, as the minister of communications earlier announced?

Are there negotiations to obtain additional frequencies to accommodate the increasing network use?

Yes, I would not say negotiations, but we are requesting more frequencies, as today we witness network saturation due to the increase of data usage. Now we are reaching the limit of what we can do with the available frequencies. For the quality of the network we need more frequencies.

Did you receive a response on your request to obtain additional frequencies?

No, until now we don’t have an answer, but I hope we will receive an answer very soon. As I said, we are reaching the maximum capacity of the network.

Are we already saturated in 3G, and do we have to move on to 4G?

In fact, what we need is more frequencies, in 3G or 4G. If you have more frequencies, you give more space to carry more data and that is exactly what is happening today. The data traffic is growing very fast, its growing by 100% every year in Egypt. That means double the traffic each year. If we deploy 4G, customers who are migrating from 3G to 4G will free the space for more usage in 3G. It’s like the voice calls, you have the voice in 3G and 2G. Nowadays, the 2G is not saturated because you have 30% of the voice which is on 3G. For the data, it’s the same, today 90% of the data is 3G and 10% is 2G. If we put 4G, you migrate the one which will use the 4G terminal, and you will have more space on 3G.

Isn’t it early for Egypt to start moving to 4G, as there are more innovative countries in the region that are still on 3G?

The UAE, Kuwait, Saudi Arabia, and Oman are on 4G. I think the sooner the better. The countries which are not on 4G yet are Morocco, Algeria, Tunisia and Libya. But with a country like Egypt, with its high population, the government should have a frequency plan for the future. We know that broadband will help the development of the country.

How does shortage in foreign currency affect the industry?

Foreign currency is significantly important for us, as all the hardware is manufactured outside Egypt. Then I would say that, if we want to develop the network to introduce new technology, we need foreign currency, as we also need it to maintain the network as it is. But this shortage affects all kind of importations in every sector.

No fresh borrowing in the years ahead?