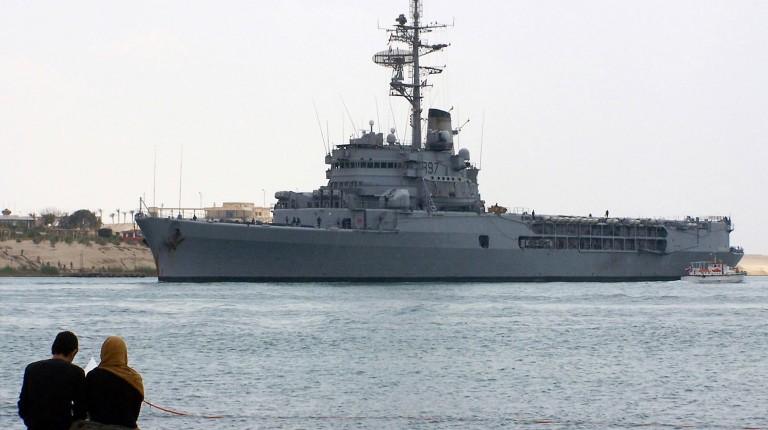 A specialised technical study was prepared by the Suez Canal Authority (SCA) on the role of the new expansion in enabling the waterway to keep pace with the future growth of the world trade movement, which is growing at an average of 3% per year. Daily News Egypt is exclusively publishing the latest study.

The study indicates that the ship size capacity is the waterway’s capacity to receive vessels of certain sizes. It is measured by the relation between water sector area of the canal and the water sector area of the vessel’s submerged part (draft). This is according to the rules of navigation and the transit regulations, where each draft length corresponds to a specific width.

The capacity of the navigation gateway evolved in several stages since the nationalisation of the canal. This development stopped with the declaration made on 20 January 2010, which defines the permitted length of draft to be 66 feet (20.12 metres) with a width of 164 feet (50 metres).

The study notes that the Institute of Shipping Economics & Logistics (ISL) has clarified in its monthly newsletter titled Shipping Statistics and Market Review (SSMR) that the global fleet of commercial vessels was of 49,576 ships at the beginning of last year. The fleet has a loading capacity of 1604.4m deadweight tonnages (DWT). 44% of this fleet is bulk carriers, while oil tankers represent 27% that increased to 35.5% when accounting for chemicals and liquefied gas carriers, in addition to 13.5% container carriers.

It also shows that only two types of vessels have summer draft longer than 17 metres: bulk carriers and crude oil tankers. The remainder of the fleet, including container carriers, has drafts of less than 17 metres.

Studies conducted by the Economic Research Unit of the SCA last year confirmed the canal’s ability to receive all sizes and loads of world fleet, whether empty or with partial load, whereby the ships that transit at the canal fully loaded represent 60.9% of the oil tankers transiting the canal, and 92.1% of bulk carriers, such as grain, in addition to 100% of the container carriers and the rest of transiting ships.

Meanwhile, the number of ships that could not cross the canal fully loaded last year was 674 ships. They are distributed between 578 oil tankers and 127 dry bulk ships. This entails that any future projects for the development of the waterway by increasing the capacity, or expanding and deepening will target transiting these ships fully loaded, as they can now transit if loaded partially.

The study shows that the oil super tankers can cross the Suez Canal after reducing part of its cargo in the oil pipeline “SUMED”, then cross  the canal with a smaller cargo to the Mediterranean in order to regain its cargo and continue its trip to Europe and America. The number of tankers that transited the canal this way amounted to 1,721 with a load of 287.7m tonnes of crude oil, achieving revenues of $249.3m during the period from September 1997 to June 2014.

Regarding the giant bulk carrier ships, most of them operate in areas far away from Suez Canal (between Brazil and China, and Australia and China). Based on these results, there is no actual need for increasing work in the Suez Canal.

The actual factor that calls for developing the salty waterway by digging the new Suez Canal, in addition to deepening 37 sqkm, is to receive ships with plungers of 66 feet depth with the goal of developing the discharge (numerical) capacity (the number of ships that can cross the canal in one day).

The study shows that the waterway allows only one ship in one direction and does not allow intersection, so a number of by-passes were established in order to allow ships to pass in both direction, one in each waterway (whether the original or the branch).

The study also identified the second factor, which is the time interval between the transiting of each ship. Ships transit the Suez Canal in convoys with time intervals that allow them to stop before they hit ships in front of them in emergency cases. The interval increases as the size or speed of ships increase, whereby larger ships need a longer stopping time than smaller ships, which eventually leads to increasing the time interval of the convoy.

The third factor of numerical capacity is the speed of transiting ships. The speed of transiting ships ranges from 13 to 16 km/h depending on the ship type, DWT, load type, and places of transit along the waterway. These points are defined by the navigation list, and are monitored by electronic surveillance system (VTMIS) by the central monitoring stations and counselling rooms along the waterway. This is why when organising transiting convoys, faster ships are put upfront, and sometimes convoys are rearranged in the Bitter Lakes region.

The numerical capacity of the canal is in direct proportion to the transiting ships’ speed. For safety purposes, breaking speed limits are extremely prohibited, as ships’ speeds and intervals between the ships vary according to their types and cargo. The larger the ships are, the longer intervals become. This leads to the reduction of the numerical capacity, which is the determining factor in the development work on the Suez Canal.

The importance of development is that the number of ships transiting in each convoy depends on the ability of the waterway to allocate waiting places. This is how the canal is now able to reduce transit time. More waiting places were secured for more ships. The Suez Canal used to run three convoys in each period (24 hours). Two of those came from north, where the first (N1) stops at the Great Bitter Lakes region, and the second (N2) stops at Ballah shunt, while the convoys coming from the south transit directly to the north non-stop.

The study also emphasises that the importance of the new projects lies in keeping pace with global growth, seeing as the current discharge and absorptive capacity is sufficient to accommodate the numbers of ships and shiploads wishing to pass through without delay.

However, the development in marine transport economies, especially on benefiting from the economy of scale by replacing smaller vessels with larger ones, led to an increase in the tonnage of passing ships. At the same time, the number of ships declined acutely, specifically since 2002, to date. In 2014, 17,148 ships passed, with a daily average of about 47 ships, with net tonnage of 962.8m tonnes; an average of 56,140 net tonnes per ship.

When comparing between the years 1982 and 2014, we will find an exceptional development. Despite the increase in tonnages by 2.65 times, and the doubling of the average tonnage per ship by 3.5 times, the number of ships declined by 24%.

This reflects an influencing factor in the channel, which is the steady growth in total tonnage, not the number of ships especially as the canal has actually exceeded its average absorptive capacity and will not be able to keep up with global growth in trade movement without the implementation of a new duplication through the New Suez Canal. The New Suez Canal included digging  35km, in addition to deepening 37 km, so that the length of the canal would be  72km.

The study explains that the waterway’s absorption capacity, in terms of numbers, is 78 standard ships, with average tonnage capacity of 50,000 tonnes. The time interval between these ships reaches 10 minutes, and increases with the increase in tonnage. Thus the water space occupied by the ship increases; if the time interval reaches 30 minutes, the ship will take up the place of three standard ships.

As a result of the doubling of ship sizes globally, the waterway of the canal now requires development to be able to receive large numbers of ships, as the requests for passage by such ships have exceeded the current capacity of the canal. This applies especially to ships heading south, as they have to wait for ships heading north, especially as, in exceptional cases, the absorptive capacity could be increased to accommodate more ships by amending trip times, or amending the time round. These measures result in long waiting time and delay of passage, which are all negative factors that affect the canal’s competitive advantage.

The study concluded that the doubling achieved by the new canal saved the canal from failing to receive larger numbers of ships compared to the current capacity. The reason for this is that the length of the time intervals in the old system was going to stand in the way of allocating places for ships to wait, or allocating water space for new additional ships.

A table showing the submerged parts of the numbers and types of ships that cannot pass through the canal with their full capacity: