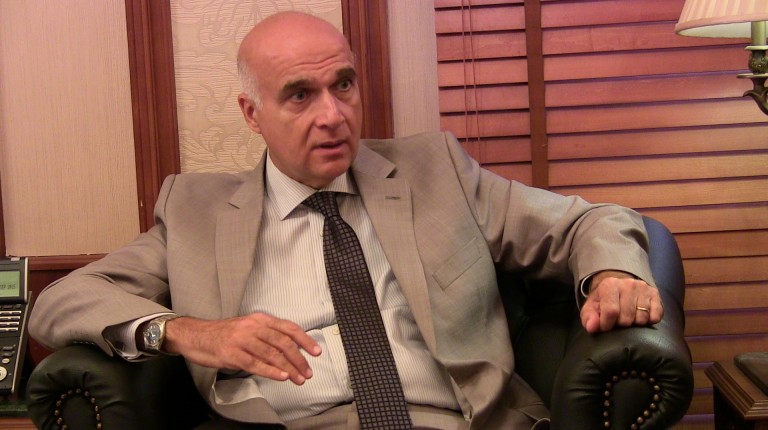 The minister told Daily News Egypt that the current year will end with a growth of 7% in tourist numbers, compared to last year, during which 10 million tourists arrived to Egypt. However, he said Egyptian tourism overcame a difficult crisis over the past four years, and is able to recover.

How do you view the next winter season in light of the recent terrorist attacks?

First of all, terrorist attacks can occur anywhere in the world. Egypt is not suffering from terrorism alone. All Egyptians will work to eliminate it.

As for the winter season, there is a slowdown in bookings, but we expect an increase in tourist numbers by 7% by the end of this year, compared to 10 million tourists last year.

The Egyptian tourism sector has gained considerable experience due to the four-year long crisis. It is able to recover under the joint efforts of the state and the sector’s employees. The total tourism income in the first half of this year amounted to $3.3bn, compared to $3.2bn during the same period of last year. Egypt is a touristic country with great potential and resources. There is a global demand to visit Egypt.

What is your plan for the recovery and revival of the rates achieved in 2010?

We have a good marketing plan that will be implemented from October after contracting with global promotion company JWT. The campaign will start from Egypt.

Egyptians will be the ones promoting for tourism in Egypt. This is a major shift in the marketing of tourism. Egyptian people are aware of the importance of this industry and will support it if it offers good job opportunities.

What is the role of the overseas offices in the next promotional campaign?

Overseas offices of the General Authority for Tourism Activation will have a major role in the promotion of different patterns of tourism, whether by collaboration with tour agencies or the media.

The Ministry of Tourism will organise introductory trips for foreign media and international companies to visit tourist areas in Egypt to change its image.

There are tourist areas that are witnessing a decline, for instance, Luxor, Aswan, and Taba. How will the Ministry of Tourism work to support them?

25% of the promotion budget will be allocated to Luxor and Aswan. This should raise occupancy rates in both cities. There will also be direct flights from Western European countries to Luxor airport, next to the current flights from some European capitals.

As for the internal level, the Ministry of Tourism supports tour programmes for Egyptians to visit these areas. These programmes have been extended to the end of this year.

We will follow a strong marketing technique, either through targeting new tourist segments or by adapting separate techniques for each region. We aim to celebrate next year as the year of inbound tourism.

Will Nile tourism return strongly in the upcoming period?

Nile tourism is one of the most important tourist products offered by Egypt to tourists. It is not available anywhere else, and includes shrines and archaeological monuments. As I mentioned, the upcoming period will see new means of marketing and promotions for all Egyptian tourism products, among which is the Nile tourism.

Long cruises between Luxor and Cairo are present and the Ministry of Tourism financially supported the development of a range of berths on the river, especially in Upper Egypt.

Flights between Luxor and Aswan are also present, and saw a high demand, compared to those flying north.

The Ministry of Tourism will strongly support inbound charter flights from Europe to Luxor and Aswan, as well as regular Egypt Air flights.

The goal is to increase the number of passengers on each flight coming to Egypt and to make tour agencies direct their flights and passengers to Egypt.

The European market represents more than 70% of incoming tourism to Egypt. How do you see the future of the flow?

Europe is a major market for Egyptian tourism. European countries lead tourism exporting to Egypt. The Russian market is the leading market in the tourist flow to Egypt. During the first half of this year, there have been expectations of declining Russian tourism flow by more than 20%, as a result of the exchange price of the rouble against the dollar, but the decline was only about 7%.

But there is an important point that should be noted here. The low rate of the rouble against the dollar is not bad at all levels, as it also reduces the cost of the flights coming to Egypt from Russia.

The reason for this drop as you know is the Ukraine crisis, as well as the decline in global oil prices.

What about the Western Europe market?

Yes, there we have Britain, a main tourist exporting country. We had one million tourists from there this year. There is an increase in bookings from 2% to 3%. Germany is also similar, as booking increased from 10% to 15%.

The Italian market is a very active market. It is an important market to Egypt. There has been a slowdown following the bombing. There were some cancelations during the period right after the incident.

However, this slowdown will not last. Tours began to come back to Marsa Alam, and Sharm El-Sheikh.

This year, there were marketing campaigns in Arab countries. How did they perform on the ground?

There was a large influx from the Arabian Gulf and Jordan to Egypt, especially during last July. We have seen arrivals of 24% from Jordan, 95% from Saudia Arabia, 77% from Kuwait, and 43% from UAE.

The “Masr Orayeba” (Egypt is Close) campaign has contributed greatly to this flow of Arabs to Egypt. The campaign is still ongoing. We have agreed with the Minister of Civil Aviation to develop a programme of trips and incentives for EgyptAir flights from Saudi Arabia, Kuwait, Jordan and the UAE.

There has been a noticeable flow from Jordan to Sharm El-Sheikh. What are your views on this?

This is a good observation. Yes, there has been a very good growth of tourist inflow from Jordan to Egypt, and we are working to attract Jordanians to come to Cairo.

You mentioned in previous press statements that there is an amendment to the flight incentives beginning in November. What is the current status of these amendments?

The amendments were intended to be more powerful. We will divide this support for the sake of areas suffering from a decline in flow.

The Ministry of Tourism utilises opinions and suggestions of the Egyptian Tourism Federation and the views of foreign tourist agencies.

There is concern that the amendment could affect the tourist flow to Hurghada and Sharm El-Sheikh after the news of cancelling flights incentives in both cities.

I affirm there will not be any amendments to the flights incentives without consultations with our partners in foreign companies or the Egyptian Tourism Federation.

Tourism workers complain of government-imposed taxes and demands of late payments, despite the ongoing four-year crisis. What do you think can be done to resolve this matter?

We agreed with the Ministry of Social Solidarity to drop some arrears. Companies should reconcile their positions. As for taxes and debts, they are rights of the state, and they must be paid.

In Cartoon: The Italian tourism in Egypt

Tourism sector aims to increase number of French tourists to 500,000 by end of 2015: Ministry official