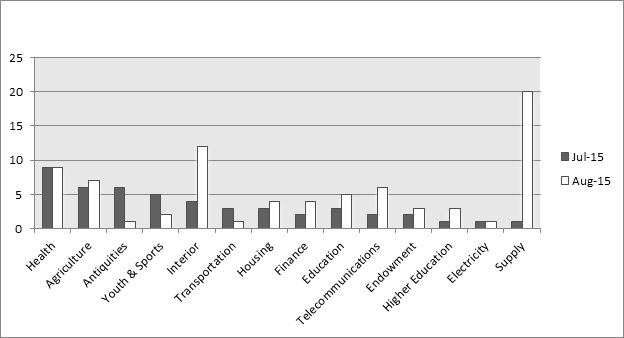 Partners for Transparency (PFT), a recently launched NGO that has been working on corruption files, issued two reports for the 2015 count of cases. It reported 71 cases in July, which increased to 104 in August.

The PFT reports highlight corruption cases in ministries, but also in other government institutions such as judiciary and press institutions, as well as private companies. However, the highest reported cases occurred in local administrations and ministries.

According to PFT Director Walaa Gad, corruption is widespread in all state entities in Egypt. “Even in ministries we thought were on good performance lately, such as the Ministry of Supply, which we were surprised to document 20 corruption cases for this month, a relatively high number,” Gad said.

However, AP explained that the numbers are accumulated from previous years.,

“There is a difference between corruption cases and revealing corruption cases,” Gad explained. The latter is a positive step which indicates that first there is an extent of ‘openness’ and freedom in exposing and reporting corruption, and that second, monitoring entities have started working seriously,” he said.

Furthermore, it means that the number of reported cases raises several questions. Are those all cases? How come we have such high rate of corruption?

Moreover, all incidents have been revealed by monitoring bodies, but not a single minister made declarations or called for investigations. “This leaves us with two hypotheses. Either that senior state executives are unable to take action, or that they are corrupt as well,” Gad added.

On a further note, Gad tackled the issue of executive officials at all levels of state institutions. He believes that Egypt might have a strategy to fight corruption but it lacks proper mechanisms inside ministries and local units and proper definitions of officials’ roles, which stand in the way of fighting corruption.

Gad also thinks that legislations need to be stricter. He gave the example of ‘reconciliation with violators’ in the law on illicit gains.

“Would not the official employee, who took bribes when the crime occurred, get away with it during the reconciliation process? The law gives them a green light on corruption, knowing conflicts would be eventually resolved through reconciliation with the original perpetuator,” Gad commented.

AP handles most corruption cases, whether they are financial, administrative and even ethical violations, based on reported complaints from citizens. As an example, the authority has been investigating cases of medical negligence.

There have been at least 594 reported cases of neglect in medical treatment in the public sector only in 2014, which resulted in the death of many patients. Most cases vary between tardiness in medical interference, unavailability of medical services, and rejections of patients by hospitals and clinics.

In nearly 16 cases reported by AP’s media centre in 2015, 72 officials and employees of the government and public sector were either investigated or referred to court on corruption charges, 10 public local institutions and six ministries: Education, Health, Housing, Environment, Antiquities and Manpower.

This has been particularly seen in cases of infringements on agricultural lands and a construction violation, which means a large number of local municipalities and units have been drowned in corruption in the past years.

The spread of corruption is ‘contagious’ according to AP which stated it noticed a ‘corruption extension’ in the very same places, due to the lack of penalties applied on perpetuators.

AP explained that the reason of such widespread corruption was not lack of regulations but the failure of administrative authorities to properly implement laws. It recommended more power decentralisation to allow local authorities to impose strictness.

Nonetheless, the president passed a controversial decree last July, allowing him to dismiss the heads of regulatory bodies, which goes against the constitution that guaranteed their independence from state interference.

“Indeed, Al-Sisi mentions corruption almost in every speech, and conducted many meetings with the head of ACA,” Gad asserted. “However, as long as you are giving executive power the right to dismiss or appoint heads of regulatory bodies, you are preventing their independence and their ability to perform,” Gad concluded.