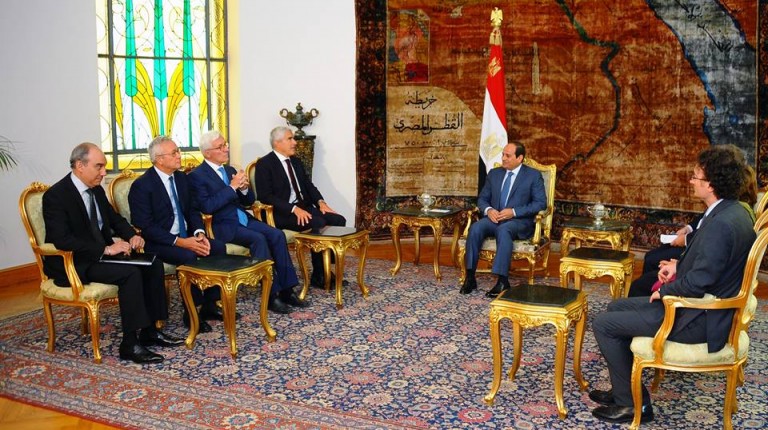 President Abdel Fattah Al-Sisi met Wednesday with a delegation from the Foreign Affairs Committee of the Italian Senate, headed by its Chairman, Pier Ferdinando Casini, to discuss bilateral relations and cooperation.

The Italian Ambassador in Egypt was also in attendance.

During the meeting, Italian Senator Casini expressed the desire for strengthening parliamentary relations between Egypt and Italy after the new Egyptian parliament is formed.

Al-Sisi welcomed the cooperation between both parliaments, stressing the importance of adding a popular and parliamentary dimension to the unique relations between both states.

Parliamentary elections are scheduled to take place in October, with the parliament expected to be formed by the end of 2015.

Casini further congratulated the Egyptian President on the recent discovery of a large offshore natural gas field in the eastern Mediterranean.

The Italian energy giant, Eni, announced its discovery of the “supergiant” gas field off Egypt’s coast on 30 August, labelling it a “historic discovery” that would enable Egypt to meet its natural gas needs for decades to come.

President Al-Sisi praised Eni’s work in Egypt, and stated that the recent discovery will lead to more discoveries in the energy sector, as the exploration process continues.

Concerning the battle against terrorism, Al-Sisi stressed Egypt’s efforts, specifically in the Sinai Peninsula, taking note of Operation “Retribution for the Martyr”, which is currently being carried out in the region.

The situation in Libya and Syria were also discussed during the meeting. Regarding Libya, Al-Sisi stressed the need to address the political and security dimensions in parallel, through supporting the UN ambassador’s efforts, as well as providing support to the national government and the elected parliament.

In discussing Syria, Al-Sisi reaffirmed the importance of reaching a “political solution” and the need to “reconstruct” Syria after reaching a political reconciliation.

The president also urged the international community to pay close attention to the refugee crisis, and added that Egypt hosts some 5 million refugees from Arab and African nations.

Senator Casini further expressed gratitude for the rapid renovation of the Italian Consulate in downtown Cairo, following the bomb explosion that hit the area on 11 July.

The explosion left one dead and nine injured, according to the Ministry of Health. Following the bombing, the ‘State of Sinai’ claimed responsibility for the attack.