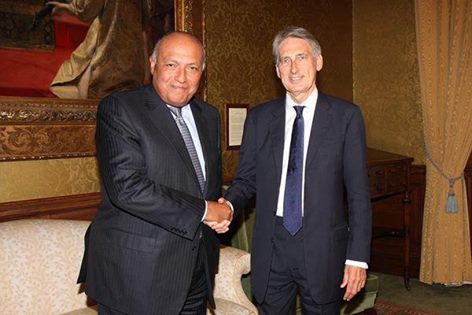 Minister of Foreign Affairs Sameh Shoukry met Wednesday with his British counterpart Philip Hammond in London where they discussed means of countering terrorism and developments in Syria, Libya, Iraq and Yemen.

Hammond expressed anticipation to an expected visit of President Abdel Fattah Al-Sisi to the UK upon an invitation by British Prime Minister David Cameron, according to a statement from the Ministry of Foreign Affairs.

According to the ministry, the British side is expecting the visit to enhance political and economical bilateral relations between the two countries.

The visit was much debated, as it was not confirmed by officials before the ministry’s statement. Reports had alleged there were security reasons behind the delay of the visit, in fear of legal prosecution attempts awaiting Al-Sisi upon his arrival in the UK.

Shoukry arrived Tuesday in London after a visit to France where he headed an Egyptian delegation that participated in an international ministerial conference to frame a plan to counter the “terrorist practices of the ISIS group against vulnerable populations in Syria and Iraq”.

The talks in London tackled developments in Libya, with Shoukry warning against the potential of expansion of the “Islamic State” extremist group (IS) in Libya if a national reconciliation government is not formed as soon as possible.

Hammond, in a meeting with Al-Sisi in March, stated a common desire for the global community to work together tackling the shared threat of IS. “We also discussed how to take forward the ‘UK/Egypt High-Level Security Dialogue’ and the current situation in Libya,” he stated.

In July, Shoukry urged his British, French and German counterparts to assure their respective countries’ continuous support of Egypt against terrorism.