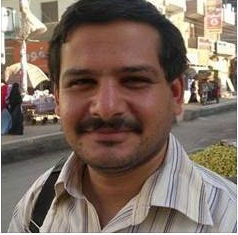 Zaki’s family confirmed that police forces arrested him from his private residence in Beni Suef on Monday. They added that, on Wednesday, they received a phone call informing them of their relative’s death.

The interior ministry announced Thursday that Zaki was killed action in the Beni Suef governorate, after exchanging fire with security forces. The ministry claimed in a statement that intelligence was gathered on Zaki’s whereabouts, and police forces surrounded his house and exchanged fire with him, and he was killed.

The ministry said that the deceased was wanted in two cases, both related to sabotage and violence. According to the statement, Zaki was involved in giving out orders to fellow Brotherhood members to target police officers in the Homeland Security apparatus.

According to investigations, Zaki, who worked as a sales representative for a pharmaceutical company, was found to have a machine gun and some bullets.

The FJP reported that the prosecution ordered the burial of the body, but Zaki’s family refused to sign the burial permit.

A spokesperson for the Muslim Brotherhood told Daily News Egypt that the whole incident is considered an “act of extra-juridical killing”, adding that “nowadays police forces are taking matters into their own hands, without considering the law or human rights”.

One of the most recent cases included two men, named as Mohamed Khames and Salem Sayed, who were killed two weeks ago in Fayoum, as police stormed their home, while eyewitnesses claim they were unarmed.

They were accused of killing a policeman and damaging a car belonging to a police officer, leading to the death of his daughter. Khames and Sayed’s bodies were transferred to Tamia Hospital’s morgue, and the case is currently being investigated by the prosecution.

The Students Against the Coup movement and the  Brotherhood accused security forces of killing the two men after arresting them.

Similar accusations were directed at the police for killing unarmed suspects at the beginning of August, when police forces stormed into a farm and killed five Muslim Brotherhood members.