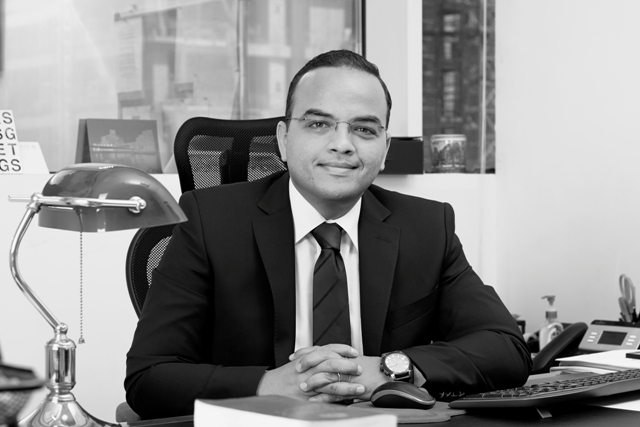 Transforming the Suez Canal Axis development area into a special economic zone is a positive step as it allows the country to dissociate this zone from the jungle of laws that have been in place for years, said Mohamed Khodeir, the Corporate Commercial Partner at Al Tamimi & Company.

Daily News Egypt sat down with Khodeir, to discuss the current investment climate in Egypt, along with his views as a legal expert on the new Civil Service Law, his opinion on freezing the capital gains tax, along with other steps that have been taken by the Egyptian government. He further reflected on investors’ views of Egypt at the current time and in light of the reform measures that the government has adopted.

Other than expanding in the Arab region, what was the aim of forming an association between Al Tamimi & Company and the Egyptian-based Khodeir, Nour & Taha law firm?

Al Tamimi & Company is the biggest law firm in the Middle East, with a wide array of expertise that expands to 47 countries worldwide.  Through this strong presence, the firm provides creative and diversified legal solutions for its clients that are in line with our international legal experience. With this collaboration, we as an Egyptian firm are able to gain the international experience that helps us widen the horizon of our legal services, as well as integrate with our own expertise and result producing in the end the type of creative legal services that are compliant with the needs of our clients and the “New Egypt”.

How do you support the government in its legislative reform measures?

We highly support the efforts exerted by the government, thus we publish reports that address the progress made by the state in a number of issues, namely the investment portfolio, which is one of the most important accomplishments made. Basically, we show what has been achieved, make an objective analysis and finally add our opinions on it, which is a way for investors to see what has been accomplished so far and help them understand what to expect.

Well, there is never a specific prescription that determines whether a place is perfect for investment or not. There are however criteria that are generally accepted internationally, and the investment climate will be evaluated accordingly.

Without a doubt, the procedures investors need to follow are still not fast and easy and we can’t say that the current government was able to get rid of bureaucracy in a year. The government however said that the legislative reforms will take between 18 months to two years so that their impact could be fully reflected upon implementation. So the first step involving the regulatory reform is there. However, time is still needed for applying the mechanisms correctly and for training those who will be in charge of implementing them.

Meanwhile, to keep on track, the government changed the Civil Service law, which affected the state’s administrative bodies. Amendments to the investment regime will also allow the hiring of high calibre individuals from outside the state apparatus, thus providing the needed talent to the regulations of the investment law as the creation of a one-stop shop.

Those steps and more are positive signals to the international community, which have been reciprocated in the numbers and rankings reported by international rating agencies, as well as the increase in FDI in the last quarter.

The government also started resolving problems faced by investors’ in the country and it also has been granting licences to value-added service providers, so even though the investment law’s effects haven’t been fully felt on the ground, such steps have reassured investors that within 18 months Egypt can actually provide better and more efficient services.

The new Civil Service Law has been highly opposed by many Egyptian citizens. How do you view this new law? Some fear that with its implementation, a number of government employees will be dismissed from their positions. What do you think about this?

With my modest reading of the new law, I didn’t see that there are provisions allowing the unfair dismissal of employees, I believe that from the legal aspect, the new law added two main things; first, it provided the opportunity for early retirement for those who don’t want to continue working, and it made the process easier for them. Secondly, it changed the criteria of evaluating performance and promotions in accordance with skills and qualifications rather than the number of years the employee has worked.

I believe that the general talk without real dialogue or careful analysis of certain articles in the law is not the right way to handle this.

President Abdel Fattah Al-Sisi issued a decree designating the Suez Canal area as a special economic zone. How do you view this decision and what are the main benefits that could be gained from it?  Does your firm have a role in this?

Currently, we do not have a direct role in this. Egypt has about 40,000 laws; a minefield of legislations that have been there for years, so making changes is a challenge, but at this point Egypt is setting its priorities and placing them separately in intensive care, and this is what is being done in enacting legislation for creating a special economic zone. This, in particular, is an exceptional legislation, as creating free zones and special economic zones allows the country to make legislations that are separate from the myriad of laws it has. It also allow the state to put specific regulations that are appealing for investors and apply them specifically in such zones.

From a preliminary reading of the law, I believe it may be beneficial, but as a law firm we have not yet fully analysed it.  However, I can say that it is moving in the right direction, to an end where Egypt has legislation for special economic zones that can be used as an example for wider application.

With your dealings with investors from different Arab and foreign countries, how do investors view the Egyptian economy at the current time, and what are their main fears?

Through my dealings with our clients, I can see that they have a very positive view of the country. As a matter of fact, our association with Al-Tamimi was derived from the needs of our clients and we saw the interest they have in Egypt.  That was the main reason we created this collaboration.

Egypt’s ratings and economic conditions are progressing.   Meanwhile, world changes have also affected us positively when you take into account the decline in oil prices, which had a positive impact on Egypt by lowering the burden on importation budgets.

Investors, however, still have their fears. The one thing that we must solve to avoid making a mess of reform is the issue of bureaucracy; as a result the Civil Service Law should be properly enforced and it needs to solve these problems directly, however good the law may be, it has to be implemented properly, and not just prove to be a worthless tool. Human capital as well is a very vital issue, as employees should be aware of the importance of applying this correctly and they should be trained on how to implement the new regulations.

Also, through your dealings with investors, what are the main sectors you find them interested in?

The sectors attracting investors the most are the energy, infrastructure, technology, tourism, banking and financial sectors.

Experts have said that the decision to freeze the capital gains tax for two years will slow down the process of reducing the budget deficit. How do you view the decision?

During this time, Egypt needs to prioritise decision-making, and placing a freeze on capital gains tax could be a useful step for pushing investment forward. Placing a freeze until investors are reassured of the situation in Egypt can only be beneficial, and subsequently there will be a better time to re-apply it.

Are there specific incentives that the Egyptian government should provide for investors in the upcoming period?

Speeding up the implementation of electronic government is important, as it will substantially reduce the need for dealing with bureaucracy, something which we should be striving towards.

Could you give us an example of a case that your company was handling here in Egypt?

Our office represented Mobinil in its agreement to sell its entire stake of 99.9988% of the Egyptian company for mobile phone services stocks Towers (SAE) in favour of Eaton Company Limited Towers Egypt, a subsidiary of the company Eaton Towers Ltd. in the field of the provision of common infrastructure services in Africa. It is a deal that is valued at about EGP 1bn.

Are you currently working on cases for the Egyptian government?

It is usually hard to reveal this kind of information as our legal services must remain confidential, but without any breach of confidentiality, at this point in time we are not.