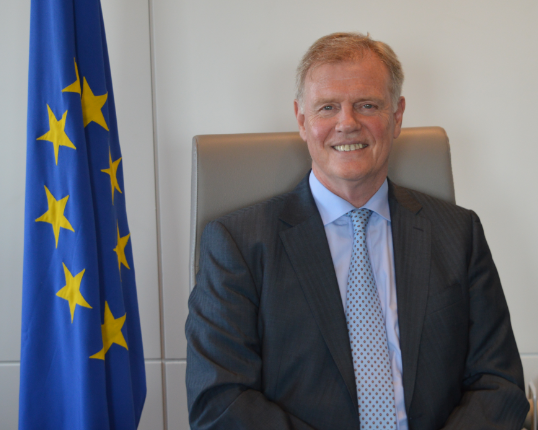 The European Union’s ambassador to Egypt James Moran spoke to Cairo press Sunday on Europe’s response to the refugee crisis, as thousands of people arrive daily to the continent in search of safety and prosperity.

The European Commission announced Wednesday its new plans, describing them as “decisive action” that includes the resettlement of 120,000 people needing protection. The figure represents a relocation of individuals who are already in Europe and who will be moved to various EU countries. Despite Germany leading the way in provisions, countries including Hungary and the UK have sought to evade accommodating those in need.

The package also includes a €1.8bn fund to address the causes of the refugee crisis in Africa. Ambassador Moran said that it will be used for development efforts “in countries such as Chad and Niger, those that have been affected by conflict, and also for stabilising countries with refugee communities, such as Sudan and Egypt. The fund is looking at refugees, not economic migrants.”

Moran said that resolving the civil war Syria is “the most complicated and difficult situation”, but it is of the most importance with regards to addressing the international dilemma. Despite that, Moran spoke optimistically of the potential effect of the Iran nuclear deal. “The hope is that this deal can help us work with Iran over Syria.”

Moran also defended the speed of the EU’s response to the issue. Despite Syria’s civil war being over four years in the making, Moran said: “We have been shocked by the speed in the past few months. The flows now have been seen for decades. It has been coming for a while but in the past three or four months it has been three or four times more than the whole of 2014… We have committed €3.9bn to the humanitarian effort, making Europe the biggest donor.”

Asked by Daily News Egypt if the migrant crisis is a taste of the global instability to come in near decades due to climate change, Moran agreed that “these sorts of crises could be dwarfed” and that the issue is the “elephant in the room”. “The Paris climate change conference in November is key. Egypt chairs the environmental ministers of Africa, and so it will be important to come to a common position. We cannot afford to fail again.”

Moran refrained from directly challenging President Abdel Fattah Al-Sisi’s recent comments that Egypt is home to 5 million refugees, and Saudi Arabia’s statements that it is home to 2 million. “The first port of call is the UNHCR for figures on the issue; they can provide the best estimate”.

Earlier in September, Egyptian businessman Naguib Sawiris made international news with his announcement of his desire to purchase a Mediterranean island for the purpose of resettling refugees. Moran said that the billionaire’s “intentions are honourable and good, it is good to see prominent people who want to help. However, I am not sure whether the plan would help or not.”

On the parliamentary elections due to begin in October, Moran said that the EU welcomes the announcement, saying it has been “conspicuous by its absence… and comes as something of a relief”. The EU will not send an observer mission, as Moran said that the preparation time of six weeks was not enough to establish a mission. The EU will however send a set of experts who will work with the Supreme Electoral Commission and produce internal reports.