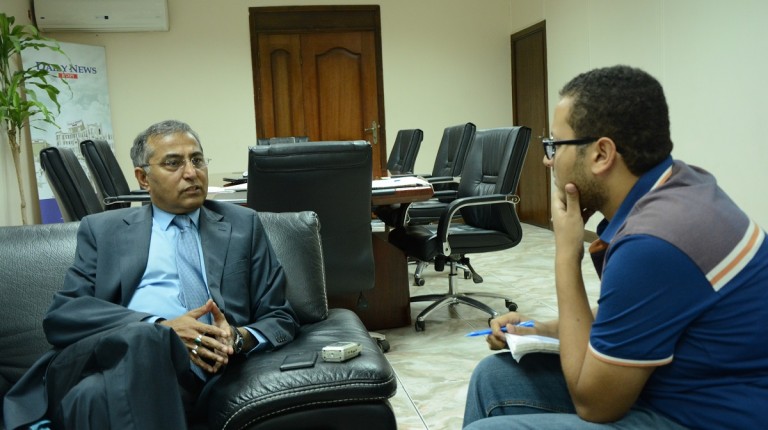 After a recent dispute between Egypt and Pakistan in May over the death sentence issued against former president Mohamed Morsi, Pakistani ambassador in Cairo Mushtaq Ali Shah was appointed in June to help mend relations between the two countries.

The ambassador tried to bring forward a better understanding between the two governments after the former ambassador was summoned by the Egyptian Foreign Ministry. The ministry  objected to Pakistani comments on Morsi’s death sentence that said the “dispensation of justice must be based on the principles of equity and fairness”.

Ali Shah discussed with Daily News Egypt on Monday several topics ranging from economic cooperation to the Saudi-led military intervention in Yemen asserting the importance of developing relations between Cairo and Islamabad.

You were not in the post in May when the Egyptian Foreign Ministry summoned the Pakistani ambassador over comments on a death sentence against former president Mohamed Morsi. How do you view the status of relations then and now?

At one point, there was a difference of opinions, but at the end of the day we don’t want that one stance to affect the bilateral relations [between the two countries].

What are your activities to develop the relations after that incident?

Well, the job of an ambassador is to build bridges not to break bonds. The cooperation between the two states was beyond any small incidents here and there.

I definitely try to mitigate the effect of that statement, and thankfully we have now a better understanding.

Aside from counter-terrorism efforts and economic cooperation, what else is included in the talks between the two governments?

I’ve just begun talking and building contacts. Our cooperation and exchange of views cover all aspects. Economic cooperation, obviously, the common challenges we face such as terrorism, which is a global matter that is not restricted to one country.

We have also cooperation on the international front, we support Egypt in its resolutions, candidacies and proposals on the topics related to the two countries.

Does Pakistan support Egypt’s bid for a non-permanent seat in the UN Security Council?

Yes. We have a common position and we share similar opinions, and within that context, we do support it.

How do you value the balance of trade and the mutual investment between Egypt and Pakistan?

The most important Pakistani investments in Egypt are in the textile sector, we have investments in this sector in Alexandria and Ismailia with a total of 12 companies in Egypt.

The Egyptian government is making good efforts to attract foreign investment and the people are appreciating these efforts, but they always want more.

Did any Pakistani companies express interest in investing the Suez Canal region development?

Egypt and Pakistan were briefly a part of the Saudi-led coalition that operates in Yemen. What was the reason behind Pakistan changing its stance regarding taking part in military operations?

It didn’t change. Pakistan always maintains extremely friendly relations with Saudi Arabia. We are standing together with Saudi Arabia by all means when it comes to defending the Saudi territories, but beyond that, maybe we think that the situation could be addressed through dialogue.

The resolution adopted by the parliament in Pakistan said that we shall come to support Saudi Arabia when it comes to defending Saudi territories. The rest we leave to the people of Yemen and other countries of the region to resolve.

Do you think there will be reconciliation between the Egyptian leadership and Islamist groups?

We shouldn’t be commenting on any domestic developments that, you can notice, causes more frictions than any positives, but we hope that Egypt achieves political stability.