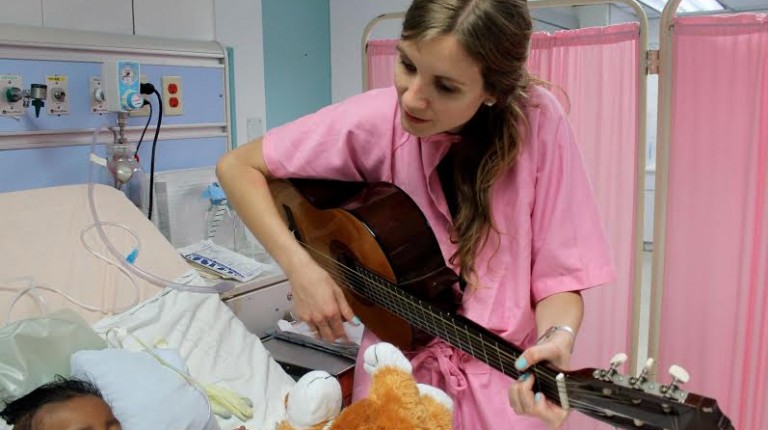 If you’d asked any passerby, they’d tell you that last Thursday definitely witnessed a major African carnival on the rooftop of Fairmont Nile City. However, the lucky crowd inside knows better. The endless moving percussions and African vocals were the night’s mantra as Egypt’s top celebrities and influencers gathered to celebrate Sharmoofers’s latest album launch.

Under the sponsorship of Rayban and with Ego Communicate’s unmatched network of media and influencers, the night turned from an intimate gathering to what could be easily categorised as a concert.

Mr. Sharmoofer is a lucky inner joke that went all the way to winning the Middle East Awards and gaining the love of thousands. Sharmoofers is a local band that reinterprets percussions in an unprecedented fashion.

“The character was created long before the band. A friend of mine called Abdullah drew it. It was a sketch of a random person who we did not know, and I hung it over my bed. The characteristics just came along the way; each time we met we added something new to it,” said Moe, one of the band’s founding members.

Through the use of social media, the band started narrating the eccentric stories of Mr. Sharmoofer. In a matter of few weeks, the joke went viral, with hundreds of followers left yearning for the band’s high-energy percussions.

“When this started, we used to play music for fun; we did not have a concrete project at the time. We all used to have separate lives and careers and we used to sit together afterwards at night to play music. However, when the feedback increased, we focused on turning it into an actual band. Our start was different because it was neither intended nor organised,” said Ahmed Bahaa, the band’s vocalist and lyricist.

The members’ exuberant passion automatically touched their growing audience. Each track unveiled a new aspect of the band’s character and introduced a new genre. While the lyrics tend to narrate stories and adventures that the common youth experience on a daily basis, the music itself is undoubtedly the band’s edge.

“Our music is certainly world music. It does not belong to a definite genre; it is not rock it is not anything else. The more we grow, the more we get exposed to different types of music. Each one of us listens to a different kind of music, whether to learn from it or just because he likes it,” said Moe.

“We are both percussionists, which gives an African flavour to our music. However, it is not completely African; sometimes it tends to be Indian, other times it is just tribal,” said Bahaa.

The founders, Moe and Bahaa, background as percussionists. Both used to perform with other bands before starting their own, which highly reflects on their music. The local scene’s lack of similar music certainly attracted an outstanding number of fans.

Nonetheless, this unique factor demanded a specific type of production in order to maintain its authenticity. The band is constantly keen on producing their own tracks to implement their exact vision, without any deviations.

“The most important thing about us is that we are an independent band not an underground one; because the later has nothing to do with our music. Unlike our music, underground bands create unknown music to a very limited crowd and community,” said Bahaa.

The band’s solid fan-base has always secured their status as an independent band. Their first concert, which was almost a year ago, was quite a phenomenon, as it surpassed any expectations with an astonishing crowd.

“We started entirely online through Facebook and YouTube. We decided to throw our first concert a year and a half from establishing our Facebook page; by that point we had half a million followers on Facebook. 2,500 people attended our first concert which is considered a big number,” said Bahaa.

According to Moe, the band only had 13 original songs at the time which was exactly enough for a concert. At that point, it became obvious that Mr. Sharmoofer was no longer a random sketch or an inside joke; instead, it has turned into a national obsession and the country’s most famous fictional character.

Before anyone could notice, the inevitable happened and the band started receiving its well-deserved parade of awards. After being recognised for their exceptional digital presence that changed the traditional rules of establishing and marketing new bands, Sharmoofers effortlessly walked out with the Middle East’s most prestigious award.

“It was our second award; nonetheless, The MEMA is the biggest award in the Middle East. Also, it is based on fans’ votes, which makes it even more important. It does not get any better!” said Moe.

“It is great to receive such a prestigious award now. For example, we dream of receiving international awards such as the Grammy, and now this has become our goal, and we are currently working our way to it. After all it is only natural to build on this award and head to the Grammy,” said Bahaa.

After much anticipation the band finally decided to launch their first album after posting singles on social media platforms. “Paranoia”, which was the night’s leading star, is the result of months of preparation.

The album is a personal journal around the globe through music; as it unfolds, so does the band’s interpretation of international genres and music. Throughout the album’s eight tracks, the music takes the fans all the way from Argentina’s reggae to India’s dancing melodies and Morocco’s whirling dervishes.

“We have several new topics in this album. As for the music, we independently wrote the album’s music and lyrics. As for collaborations, we collaborated with Abdullah Abu Zekry. He plays an instrument called Saz in two tracks,” said Bahaa.

According to Bahaa, the album’s quality is by far better than their previous singles; as they have recorded it in a professional studio, unlike the rest.

“We collaborated with prominent local music producer, Sarie, for the first time. He is featured in this album and he will also be part of the video clip,” said Moe.

The album was launched online a couple of weeks prior to the official party. The band has also been touring the country, from Sahel to Zamalek’s Sawy Culture Wheel, in order to sing it live to their fans everywhere. “We are eagerly waiting for the feedback as we believe it can add a new set of fans to our band because it has new diverse directions in terms of topics and music,” said Bahaa.

While the band’s eyes are set on seizing international fans, they are also keen on staying true to their current local and regional fans by maintaining their genuine persona and music.

As for their personal view on the local musical scene, the band certainly wishes for better standards and bigger productions.

“What we really dream of is for the Egyptian show business to evolve, especially concerts’ awareness. Concerts are not supposed to be about singers performing while the crowd merely watches. Maybe that was good enough in the past, yet in this age concerts should include more than just that,” said Bahaa.

According to Bahaa, modern concerts should be about creating an interactive experience that both performers and the audience can share. “Nowadays fans are opinionated with a clear vision of the type of music they prefer; something that did not exist six years ago. If anything is done correctly with respect to the listeners’ point of view, the audience will definitely appreciate and accept it,” said Bahaa.