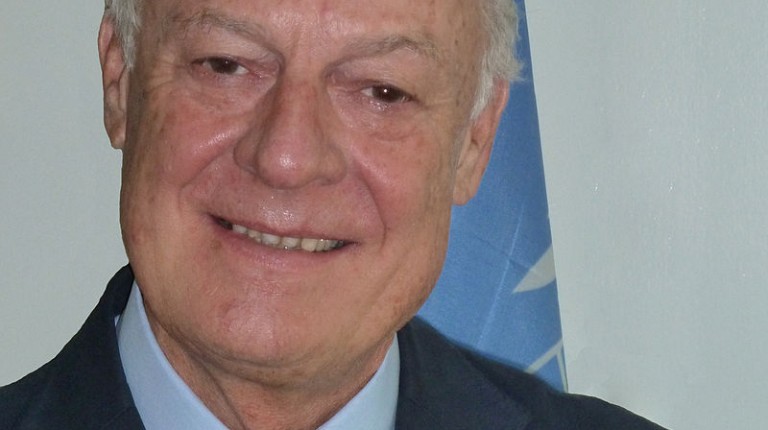 During the meeting, the pair also discussed a political solution as the only option to defeat terrorism.

The two diplomats held a press conference following their meeting, where El-Araby said that the aim of ongoing talks with the Syrian opposition and the regime is to reach stability.

“The goal is the restoration of peace and stability to Syria,” he said.

De Mistura had presented the latest efforts in solving the crisis before an Arab Foreign Ministers Council in Cairo, praising the cooperation between Arab governments.

“For me it was a remarkable and timely opportunity for explaining what we are trying to do in order to bring forward a political solution to the conflict in Syria,” de Mistura stated.

“There is only one plan, it is called the Geneva communiqué,” de Mistura said, referencing the 2012 declaration that followed an action group conference. The conference had brought together the Syrian government and opposition, stating the need for a “transitional government body with full executive powers”.

De Mistura asserted that “no victory against terrorism can take place unless there is a political solution to the crisis in Syria”.

However, he did not deny the necessity of synchronised work that involves the help of the international community to push for a solution.

“Every Syrian, when we meet them, tells us we cannot find a solution together unless the international community helps us in finding a political solution,” he said.

The 144th Arab League Council meeting took place on Sunday, and saw foreign ministers discuss various topics, foremost among which were the developments in Syria, Libya and Yemen. The ministerial discussion also focused on the latest violations by the Israeli authorities against Islamic sites in Jerusalem, as well as the armament embargo on Sudan.