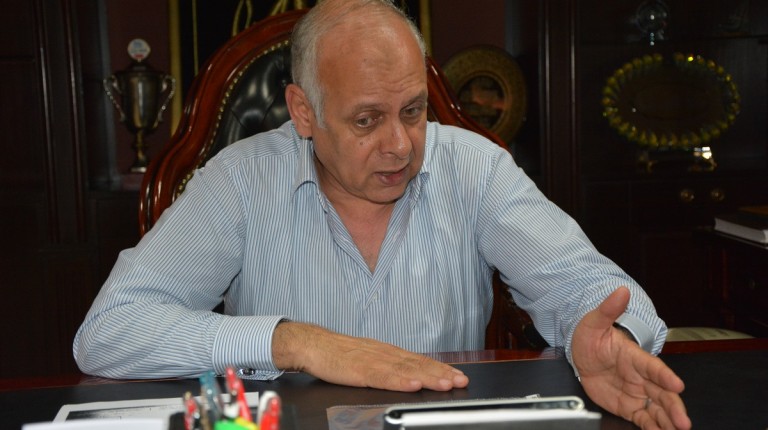 What is the value of Tabark Holding’s targeted investments by the end of 2015?

The company is planning to pump investments of EGP 2bn over the next year (2016), as we are willing to implement new projects and complete the implementation of the existing projects. Tabarak Holding targets delivering 600 housing units amongst its different projects by the end of 2016 compared to the delivery of 400 units by the end of August 2015. The company seeks the achievement of contract sales worth EGP 2bn by September 2016.

What is the volume of expenses of the company’s projects from the beginning of the year to date?

The company’s investments reached EGP 8bn in the real estate, industrial and agricultural sectors. Regarding projects currently in implementation, the company is implementing “Capital East” project in Nasr City, Cairo, which includes 1,500 housing units amounting to EGP 900m. Besides “Fantasia Resort” in Ras Sedr, South Sinai that will be established on three phases with investments reaching EGP 750m, we also have the “Ninety Avenue” project in the Fifth Settlement, New Cairo with investments of EGP 6bn.

Regarding agricultural projects, we have two projects on the Cairo-Alexandria desert road, “Jannat 1” on an area of 220 acres and “Jannat 2” on 200 acres with estimated investments of EGP 400m for both projects.

In addition, we have a housing project in Riyadh, Saudi Arabia. With “Riyadh heights” we are aiming to transfer the idea of Egyptian architecture (real estate) abroad with investment costs of EGP 250m.

What is the volume of the company’s land portfolio and what will be developed by the end of 2015?

We own around 7m sqm, besides 2.2m sqm in the North Coast, the contract of which was signed in August to establish a real estate project. Implementation is expected to begin in September 2016 after finalising the procedures with the governorate and the land registration. The project’s investments volume reaches EGP 5bn and will be implemented on five phases. In this project, we plan to build small chalets in 80% of the project’s total volume besides 20% for bigger chalets. Meanwhile, areas will be minimised in order to serve a wider category of clients, including the building of a mall.

Is there a plan to grow the company’s land portfolio and to compete on new lands?

The company will apply on any new land offerings, especially in New Cairo, as we are aiming to grow the company’s land portfolio.

What is the current status of the “Ninety Avenue” project regarding establishment and marketing?

We are working on launching the project during the Cityscape Exhibition. “Ninety Avenue” is a housing, administrative and commercial project and WATG Company is responsible for the master plan. The project includes 1,300 housing units, and implementation began more than eight months ago and the housing part is expected to be complete by the end of 2016 while the administration part is expected in 2018. The project’s total investments reached EGP 7bn. The company acquired the project’s ministerial approval in May 2015.

What is the status of the company’s decision to offer part of its shares in the stock market?

We are planning to offer four of our companies in the stock market, the internal evaluation for three of them was finalised, which are Tabarak for housing and development, Maadi Heights and Maadi for investment. Tabarak Holding for investment will be offered through those companies during the last quarter (Q4) of the current year. There are plans to offer three more companies in the future, which are New Maadi, Delights for Tourism and Ofoq for industrial investments, where a maximum of 30% of the companies’ total share will be offered.

Tell us more about the development situation of “The Groove” and “Fantasia” projects.

We are currently finalising the landscape maintenance of the first phase of the “Fantasia” project in Ras Sedr, which will be implemented in three phases on 450,000 sqm. The project includes 93 villas and 272 chalets. The project’s second phase is also being implemented and is expected to be completed by the end of 2016, whereas the implementation of the third phase will begin in early 2017. The project’s total investment cost is EGP 750m.

As for “The Groove” project, it is a 130 sqm project, located at the 47th km on the Cairo-Alexandria desert road. The project includes 93 villas with an investments value between EGP 350m and EGP 400m, while the implementation will begin by the end of 2015 and is expected to be completed in two years.

What are the projects that will be proposed in Cityscape?

All the company’s projects will be available, but we will focus on the “Ninety Avenue” as it is on top of our list, because we haven’t yet launched its marketing campaign that is targeted in September in Cityscape. We will also focus on our Nasr City project “Capital East”, which is a small project with small apartments, as we want to cover a bigger tranche of the society.

Is there an intention to increase the company’s capital or loan from banks?

Regarding “Ninety Avenue’s” financing systems, we haven’t yet decide its final form, either to self-finance in addition to the clients’ booking deposits or to use bank financing, especially with the huge volume of the project. Currently, the company does not depend on bank financing in any of the present projects, it only depends on self-financing and units marketing revenues.

Banks still look at the real estate sector as a high risk secto,r despite its economical and investment significance. Regardless of its providing for one of the citizens most prominent needs, which guarantees continuous activity in the market, banks still require difficult conditions from the real estate investor to provide financing for him. Banks require land registration, at the same time in which the New Urban Communities Authority refuses to grant the registration until the project is fully implemented, which makes financing difficult.