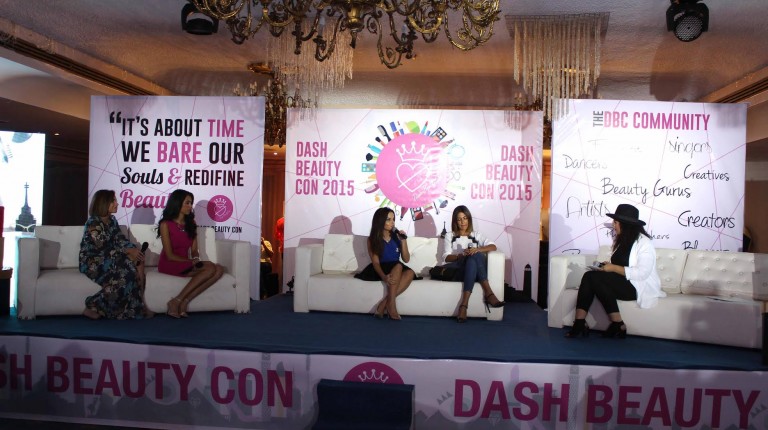 For one day the mighty Pyramids were the ultimate destination for tens of females who appreciate and admire beauty. The young and aspiring Dina Dash invaded all social-media platforms weeks earlier as she announced the first beauty conference in Egypt.

The massive campaign included many well-known influencers, make-up artists and bloggers, which only attracted a larger number of attendees.

After considerable delay, the day began with an exceptional panel that included several local make-up artists. Dolly Yanni, Soraya Shawki, May Ayman and Heba El-Kaissy were all present. This group of professionals, which were never seen together before, certainly induced excessive enthusiasm in the crowd.

The beauty doctors launched  the conference with several make-up tips and techniques. The experts made sure to define two massively popular techniques, contouring and strobing, correctly. They also tackled the subject of European and Lebanese make-up, which embody two opposite directions, from shady to bold and colourful.

As make-up artists are rarely seen in such events, moderator Nada Ayoub made sure to discuss more personal aspects in order to unveil new sides of their personal lives.

“I started back during school when a friend of mine got me a book about art that intrigued me,” said Dolly Yanni, who is the youngest make-up artist in Egypt, at the age of 17.

Meanwhile, Shawky shared her rather unusual story. “On my first day in make-up school in Barcelona, I got extremely sick and, after a day of suffering, the doctor informed me that I was allergic to make-up. I had to follow an intensive medical course to be able to pursue my dream of becoming a make-up artist.”

El-Kaissy had a different start at a much older age, as she left her job at the UN to follow her artistic dreams. “I was always top of my class, and after graduation I started working for the UN. However, after a major argument with my boss, I realised that I was not happy. I knew I had a bit of a talent and I decided not to waste it anymore,” said El-Kaissy.

The experts also made sure to receive several questions from the audience about beauty and the means of starting a career in this specialty. Shawky concluded the two questions with an affirmative opinion, as she suggested mild corrective make-up types as opposed to intensive ones. “You guys are beautiful, just hide your flaw and let your personality shine,” said Shawky.

As for the aspiring artists, she advised them to start practicing their passion by interning with any well-known artist, rather than reading books and attending classes.

The panel was followed with many others that might have diverted from the original beauty concept. The designer panel was led by phenomenal local designer Farida Temraz and Ahmed Nabil.

Despite the fact that the topics discussed did not tackle any beauty subjects, the two designers still made many important points. While on stage, the duo gave an unplanned creativity workshop to audience members who wish to become designers. Also before leaving, the two made sure to point out a couple of common mistakes.

“The biggest problem in the local scene is the lack of terminology. You need to know which fashion sub-category you belong to. There are designers, editors, stylists, social-media influencers, style influencers, etc.,” said Temraz.

On the other hand, the “girl probs” panel embraced beauty subjects once again.  Models Salma Abu-Dief, Rachel Simpson, Sofia Bogush, Suzan Idris and Menna El-Touny discussed everything, from their hidden insecurities, to how and why they chose modelling as a career.

“I have always had stretch marks and I have always been insecure and self-conscious about them. Yet, at some point, I realised that all women suffer from the same exact problem and, after intensive research, I knew that they were irreversible. Therefore, I just decided to embrace them and not hold back my life,” said Abu-Dief.

“I have always had bad skin, it runs in the family. I used to badly suffer from pimples, I have one right now,” said Idris.

As for their career launch, they all had similar stories about random open-call castings that unintentionally led to their current fruitful careers.

Meanwhile, the event’s peaks were nothing less than a rare visit from Lebanese expert Samer Khouzami and the path-finding make-up show by Dolly Yanni.

Khouzami’s conference appearance was highly special to both the artist and the audience, as it marked his first visit to Egypt. The celebrity make-up artist had a warm heart-to-heart conversation with the crowd as he narrated his exceptional story from zero to one of the region’s biggest beauty icons.

“I came from a small village in Lebanon and I never for a second thought of becoming a make-up artist due to my conservative background and family, who would not have accepted such a profession,” said Khouzami.

Today’s most prominent beauty doctor originally studied graphic design, but due to his financial status he had to work while studying. “I started working at a hair salon; my job description included tidying the place and handling the buffet,” said Khouzami.

Due to his obvious commitment and dedication, he was soon offered a job as a make-up artist under training. Until that moment, Khouzami had no clue about his bright future. After the training, his passion started evolving rapidly. In order to fix his financial issues, he decided to halt his studies for a year to save up money. Khouzami never went back to college.

“This moment is a dream in itself, for me to be here and tell you my story and maybe even inspire some of you to pursue your dreams and believe in yourself,” concluded Khouzami.

The event also included several activations and booths, courtesy of the event’s sponsors such as L’Oreal, Incoco, and CHI, among others. Moreover, the day did not lack the necessary artistic and entertainment dose, which included Broadway, hip hop and musical shows from several up-and-coming talents.

'Beginner's luck' may lay the trail to Cleopatra's tomb