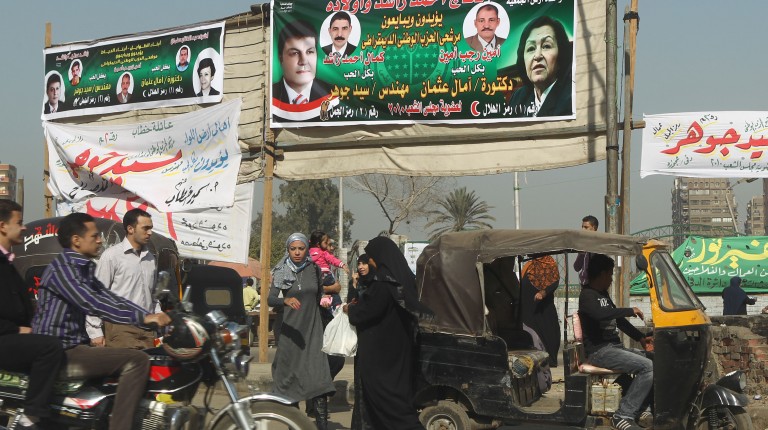 A new development in the parliamentary elections scene arose on Saturday.  A State Council-affiliated committee of senior judges advocated for the unconstitutionality of the Health Ministry’s demand for medical examination fees from candidates, who had already undergone those tests before the original date of the elections last February.

The Supreme Constitutional Court (SCC) set the date for Monday to issue its final say in the matter, as it is not obliged to follow the committee’s recommendations, according to the electoral alliance known as Sahwet Misr. The alliance, headed by Abdul Gelil Mostafa, had challenged before court the new costs of medical examination requirements for candidates set by the Supreme Electoral Commission (SEC).

However, while the SCC is not committed by the recommendations, elections were postponed last March because the SCC adhered to the committee’s judgment on the unconstitutionality of parliamentary laws.

Therefore, Egypt’s parliamentary elections could be delayed again, if the SCC upholds the rejection of medical fees paid by candidates who have completed their applications according to a deadline on 15 September, and allows new candidates to apply.

This is what Sahwet Misr has claimed, based on the principle of guaranteeing equal opportunity for all candidates. Nonetheless, Ramy Mohsen, chairman of the non-governmental National Center for Research and Consulting (NCRC) in parliamentary affairs, believes that even if the court accepts the challenge, its decision will be to refund the fees, rather than to extend application dates.

“A new phase of applications would delay elections for at least a month, and this is not likely to happen,” Mohsen said in comments to Daily News Egypt. He explained that even if the court rules that candidates should not have paid the second time, only candidates who actually applied are to benefit from it.

“We could not submit to procedures that harm the transparency and smooth process of the elections by compromising the principle of equal chances between candidates,” Shawet Misr said in a Saturday statement.

The argument is that candidates who had paid the first time should be exempted from the costs of running medical tests for the second time, when the SEC opened doors for candidates’ application this September. Fees for medical tests amounted to approximately EGP 3,000.

Sahwet Misr has claimed that those additional expenses were an obstacle for their candidates, and announced on 11 September their withdrawal from the elections. The group had addressed the SEC several times to object on the medical process, and met with SEC members a day before the withdrawal.

On the other hand, the SEC’s official spokesperson Omar Marwan explained that it was not within the commission’s legal authority to object to court decisions.

Sawhet Misr stated it was “ready for all possibilities, but hopes for a fair decision by the court”.

The issue of medical tests has been ongoing for months, mostly due to the expenses candidates have to bear. When the SEC invited candidates to apply in September, it said it was going to keep old applications and accept medical tests that have previously been submitted.

However, in the middle of the process, the Administrative Court ruled that the SEC cannot proceed using the medical reports submitted for the earlier planned elections, obliging candidates to undergo new medical check-ups. The SEC had to re-adjust its schedule and further extend the application deadline.

Meanwhile, some have accused the group of seeking to delay elections due to lack of preparedness. According to Ayman Aboul Ela, deputy secretary-general of the Free Egyptians Party (FEP), “an adjournment of elections will put the president in political embarrassment in front of the international community”.

President Abdel Fattah Al-Sisi was addressed several times by European and foreign officials and diplomats regarding the establishment of a parliament as a necessary step to complete the democratic process. In many promises, his response was to have the parliament ready before the end of 2015.

When the SCC cancelled the elections the first time in March, Al-Sisi said the new committee entrusted to amend the flawed laws would be finished within one month. However, it took at least four months before laws were finalised, and a few more months for the SEC to announce new elections.

“I am not saying we should not respect court orders, or that they contradict the president’s desire to have a parliament as soon as possible,” Abul Ela told Daily News Egypt Sunday. “However, those who deliberately made last minute objections to electoral procedures want to gain more time for personal motives, such as internal negotiations and agreements on the coalition’s candidate members,” he added.

The SEC is currently looking into appeals on candidatures, and will announce its final list of accepted candidates on 28 September, as it expected that electoral campaigns will kick off then.