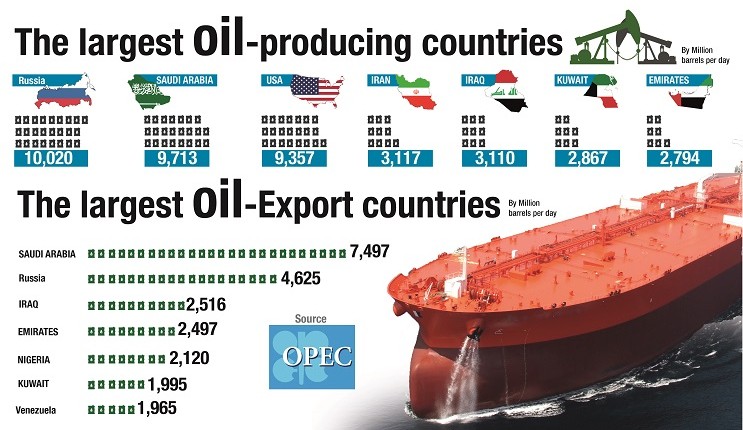 Oil producing Arab states are under pressure by low oil prices, and a foreseeable opening up of Iran on the world oil markets.

Developing countries have abundantly spent on crude oil and petroleum product imports, which revived their economies. On the contrary, revenues for oil exporting countries have reduced, as they seek market control.

The exporting countries continue to increase their crude oil production, which led to a surplus of 2m barrels between world production and consumption. This surplus is expected to increase as Iran starts exporting now that the sanctions have been lifted.

The total world production of crude oil is 95.66m barrels a day, while consumption is estimated at 93.62m, according to a report released by the Organization of Petroleum Exporting Countries (OPEC).

‘We will not be able to implement exploration and development plans with the continued decline in Brent,’ say foreign partners.

An official at a foreign oil company said that oil exporting governments confirmed their lack of intention to reduce their crude oil production, and that they will work to increase their exports to the world markets. This will, in turn, lead to a large drop in the profits of foreign companies and countries.

The official added that foreign oil companies will not be able to continue to invest in the same financial capacity in the implementation of development and exploration plans in their franchise areas. This is due to decreased profits and a significant reduction in labour in order to rationalise expenditure.

The official raised the question of whether foreign companies will remain committed to investment plans agreed upon with the Egyptian government. He predicted that nobody should get their hopes as in increasing oil production in light of the Brent price decrease as Egypt gets a partner share at world prices in accordance to the agreements.

Saudi Arabia controls about 10% of the world’s crude oil production. It produces about 9.713m barrels of crude oil per day, and exports 7.153m barrels to global markets daily.

Saudi Oil Minister Ali Al-Naimi said in previous statements that “it is impossible” for his country to reduce its production of crude oil, despite the prices drop in the global market. This was so Saudi Arabia could stay on the top of OPEC’s list of oil exporting countries.

He explained that Saudi Arabia’s economy and industry can afford temporary fluctuations in oil revenues, stressing that Riyadh shall continue its balanced policy firmly and strongly.

In an interview with USA Today at the beginning of the year, Prince Al-Waleed bin Talal said that the Saudi decision not to reduce its production of oil is correct. He justified it by saying that, if Saudi Arabia did reduce its production by one or two million barrels, other producers would secure them, which could lead to less production as well as lower prices.

Russia comes in second in exporting oil with a daily production of about 4.625m barrels of crude oil. Its total oil production is estimated at 10.02m barrels a day.

The UAE is in third place on the list of oil-exporting countries. It supplies global markets with about 2.497m barrels a day, while its total production is of 2.794m barrels per day.

As for Kuwait, it sells approximately 1.995m barrels of crude oil daily, which puts it in fourth place on the list. Kuwait’s total oil production is estimated to have reached 2.867m barrels per day.

Iran currently comes in fifth for exporting approximately 1.109m barrels of crude oil a day under embargo sanctions. It is expected to add 1m barrels per day for export after lifting these bans, as its daily total production currently stands at 3.117m barrels.

The World Bank said that Iran is expected to pump 1m barrels of crude a day to the world oil market, which will drop the prices by around $10 a barrel in 2016.

Qatar is number six on the list. It exports about 592,000 barrels per day, while its total output currently stands at 709,000 barrels.

The US occupies last place in terms of exporting oil by exporting 576,000 barrels per day despite producing nearly 9.357m barrels.

Shale oil production companies in the US began to swiftly decrease drilling operations in a way that may lead to a decrease in crude oil production. The move was to keep up with the decline in crude prices and the competition with petroleum producers in the Gulf region.

The US’ Energy Information Administration (EIA) said in its short-term energy outlook report that the average price of crude Brent reached $57 in July, and prices declined again in early August to settle at an average of $44.

The EIA reduced its forecast of crude oil prices for both short and medium-term to an average of $49 per barrel throughout 2015, and nearly $54 in 2016.

Medhat Youssef, former Vice Chairman of the Egyptian General Petroleum Corporation (EGPC), predicted that the price per oil barrel would drop to $40 by the end of 2015. This figure compares to a current price of $43 in light of lifting the ban on Iran, and its entering into the oil exporting competition with large quantities. Its current production is estimated at 3.11m barrels per day, and it seeks to reach nearly 3.9m in the upcoming months.

Youssef said that the drop in Brent prices during the 2008 economic crisis was not the creation of exporting countries that are currently fighting over control of the market. It was, instead, the result of the global financial crisis that was started by the US because of the real estate market.

A senior Egyptian government official said it is expected that Egypt would achieve an availability of at least EGP 10bn in the fuel subsidies bill during FY 2015/2016, because the government has specified subsidies allocations for the price of $70 per barrel.

The discords that took place confirmed that there were attempts to pressure partners into not reducing their investments. It is believed that, in the final accounts at the end of this year, it will be discovered that companies have reduced their actual investments in oil and gas to $6bn, as a maximum, instead of prior agreed upon investments of $7.1bn.

The increase in the surplus of oil production in global markets will contribute to the Brent decline, where the current difference between global production and consumption of petroleum is nearly 2m barrels per day.

Since crude oil prices began to decline last year, petroleum companies announced their plans of dismissing more than 100,000 workers worldwide. A further 91,000 workers at least were dismissed, the vast majority being in the field of oil and drilling and services companies, according to research by Graves & Co. a Houston consulting firm.

The dismissal of workers included highly-skilled staff, including geologists and petroleum engineers, and they are the ones who feel the greatest burdens of the declines.  In previous statements, Tim Cook, chairman of Pathfinder Staffing Company in Houston, Texas, said: “Each time an oil rig gets shut down, all the jobs at the work site are gone. They disappear.”

Statements on the Brent prices decline

John England, deputy chairman of Deloitte’s Global Energy & Resources group, said in the company’s 2015 insights that new shale oil and deep water projects in North America could be delayed for their high cost and the dramatic decline of Brent prices. He expressed his optimism about the ability of US producers to withstand the current storm.

Not long ago, Oilpro newspaper quoted Bob Dudley, CEO of British Petroleum (BP) Global, saying that “it is the law of supply and demand”, indicating that “what is happening now reminds him a little of the incident of 1986, as we may go through a period of severe drop in oil prices”.

Dudley added that he will wait for a long time before he can see the price of crude reaching $100 a barrel again.

Algeria’s Minister of Energy, Salah Khabry, said that “OPEC cannot do much on its own to stop the decline of oil prices and it needs producers from outside the organisation to assist in reducing global supply”, according to Algerian Liberté newspaper.

He noted that the 12 OPEC state members obtain 40% of global production of crude oil.

Khabry had called for an urgent meeting of OPEC on the continuing collapse of oil prices six months ago, amid the increase of US production.