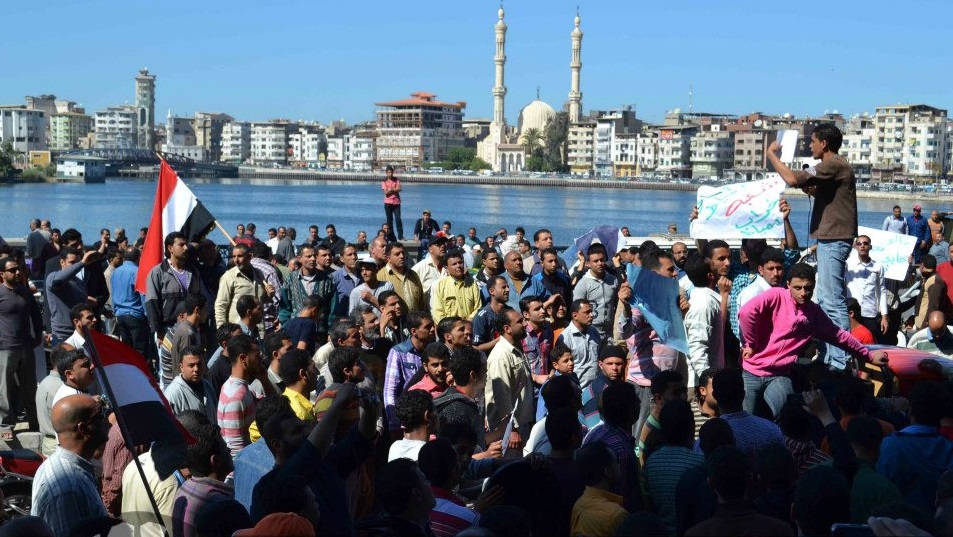 The Damietta prosecution referred Monday ten female protesters to a criminal court. They are charged with illegal protesting and possession of weapons.

Seven of them are students in different Egyptian universities.

Local rights group, including the Marasad Observatory for Freedoms, said that one of the defendants was assaulted when her sons tried to visit her during one of the interrogation sessions.

Students Against the Coup, an pro-Muslim Brotherhood opposition student movement, condemned the incident describing it as “shameful”.

The incident goes back to last May, when riot police clashed with a group of protesters in Damietta, leading to the death of one police conscript and the arrest of 13 female protesters.

At the time, police said that clashes took place as alleged members of the now banned Muslim Brotherhood organised a protest in Sror Square. During the clashes, a human shield of 70 female protesters was formed, chanting against the police and the army.

Following the clashes, police forces raided several houses of individuals suspected of participating in the violence. Also, in retaliation, riot police surrounded the village of Al-Basartah with armoured cars and policemen in plain clothes.

Al-Basartah village is said to be a ‘Muslim Brotherhood stronghold’, with minor protests held in the streets of the villages almost every Friday. Egyptian police have been engaging in weekly clashes with Brotherhood and pro-Mohamed Morsi affiliates following the ouster of this former president in July 2013. However, this resistance has been weakening.

With the exception of some villages and districts, which remain resilient against the regime, anti-government protests have decreased, following a crackdown by the police.

Protesting has become illegal in Egypt without prior permission from the Ministry of Interior. Hundreds of protesters, activists, and students are facing prison sentences on charges of defying this law.

4 killed in violent clashes in Damietta