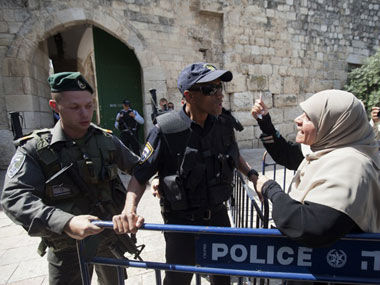 According to the officials, Israeli soldiers shot Diaa Al-Talahmeh in the village of Douma.

An Israeli army spokeswoman told AFP news agency that the Palestinian was killed by an improvised explosive device, while attempting to throw it towards Israeli army vehicles.

Tuesday morning also witnessed the shooting of an 18-year-old Palestinian woman, who was allegedly trying to stab a soldier in Hebron (West Bank), according to Israeli news reports. The woman was in critical condition when taken to the hospital.

Israeli authorities decided to enforce a complete closure on the West Bank and the Gaza Strip during the Yom Kippur holiday, also known as the Day of Atonement. The measure has also been applied in previous years.

The closure due to the Jewish Yom Kippur holiday begins Tuesday afternoon and lasts until Wednesday night. The security closure will be lifted and crossings will be reopened on Thursday morning based on the Israeli defence minister’s decision.

During the period of closure, only humanitarian and medical cases are allowed to pass through.

Thousands of police officers were deployed in East Jerusalem ahead of the Yom Kippur and Eid Al-Adha holidays, and a number of arrests have been conducted during the past several days, according to Palestinian and Israeli news reports.

Meanwhile, Israel announced Monday that it would allow Gaza to export ironware, furniture and textiles to Israel, for the first time since 2007. The measure, to be applied on 7 October, is intended to improve economic conditions in the Gaza Strip and provide more job opportunities, according to Israeli media.

Over the past week, Al-Aqsa Mosque has been witnessing rising tensions amid ongoing clashes between Palestinians and Israeli forces.

President Abdel Fattah Al-Sisi stated earlier this week that escalating violations in Al-Aqsa’s vicinity were leading to a very critical situation, warning of the repercussions of these incidents on the Palestinians and their hopes for a resolution to the conflict.