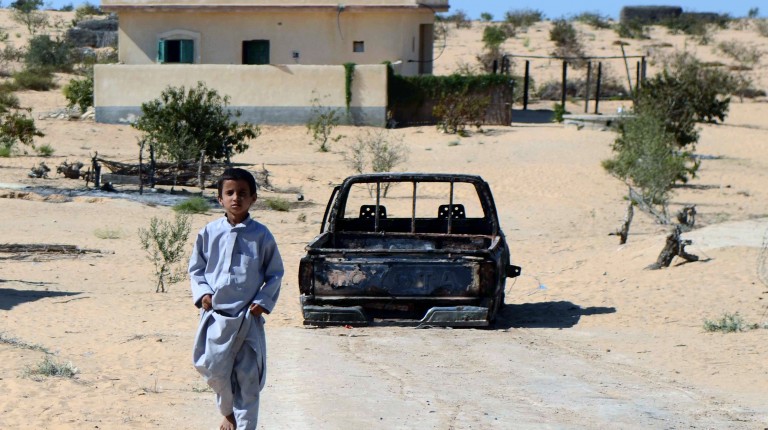 The Egyptian cabinet issued a press statement late Monday demonstrating the measures taken within its comprehensive plan to combat terrorism in the Sinai Peninsula, specifically the triangle of Rafah-Sheikh Zuweid-Al-Arish in North Sinai.

The statement provides details regarding the aforementioned plan, listing the provision of “urgent humanitarian assistance”, compensations and medical insurance to civilian residents as part of the state’s responsibilities “to alleviate the suffering of civilian residents” in the area.

Regarding the methods of combatting terrorism in Sinai, the statement specified the “reliance on accurate intelligence before conducting any campaigns against terrorist strongholds” while implementing the plan.

It alluded to the “commitment to the principle of not opening fire on a potential threat unless the source of the threat imminently threatens security forces, while taking into account the principles of necessity and proportionality.”

Meanwhile, on Tuesday, Human Rights Watch (HRW) accused the Egyptian military of conducting mass home demolitions and forced eviction of about 3,200 families in the Sinai Peninsula over the past two years in violation of international law.

In its report, HRW documents the Egyptian government’s “failure to provide adequately for residents during and after the evictions in North Sinai”, accusing the military of destroying entire neighbourhoods and razing thousands of homes as part of the plan to eliminate the threat of smuggling tunnels.

The report suggested that the use of “sophisticated tunnel-detecting technology” would have been a better alternative to the destruction of homes and buildings near the border.

Based on interviews with members of 11 families who were evicted from the buffer zone, the group stated that the Egyptian authorities provided inadequate compensation or none at all for families who had their homes and farmlands destroyed during the eviction. In addition, it stated that the authorities did not provide adequate warnings nor temporary housing.

Alternatively, the cabinet stated that full consultations were undertaken with the local residents of areas bordering the international boundaries with the Gaza Strip, and that compensation was dispensed for private property. The statement also mentioned that a new city called New Rafah is currently being built to absorb residents.

The human rights group however, criticised the absence of information on conditions in the Sinai, stating: “The government releases little information about such operations and threatens journalists who report about them.”

Since the passing of the anti-terrorism law last month, media outlets in Egypt are obliged to solely follow information provided by government bodies regarding terrorist attacks amid a battle of statements between radical militants in Sinai and the armed forces.

The cabinet stressed the commitment to “transparently convey all the facts to the public” and reaffirmed the continued provision of all necessary assistance to local residents who are affected by the security operations conducted in the Sinai.

On 7 September, the army launched operation “Retribution for the Martyr” to counter the ongoing insurgency in North Sinai. According to the military’s daily accounts of the operation, hundreds of “terrorist elements” have been killed as well as a few security personnel.

The ongoing military operation comes in the context of the comprehensive plan to combat terrorism in Sinai amid a surge in militant activity ever since the ouster of former president Mohamed Morsi in July 2013.

In allegiance with the “Islamic State”, the “State of Sinai”, formally known as Ansar Beit Al-Maqdis, claimed responsibility for the lion share of the attacks taking place in the area.