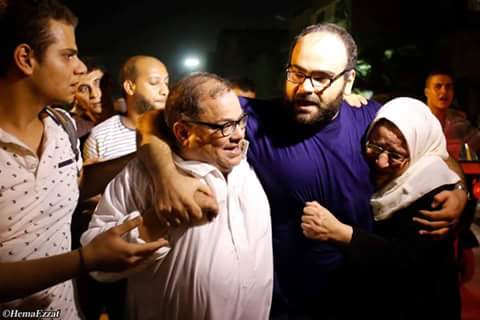 Only 48 pardoned detainees were released from prison on Wednesday and Thursday, and the remaining 52 are still being held, the Freedom for the Brave movement reported.

The group published the names of the 100 young prisoners who were granted a presidential pardon by President Abdel Fattah Al-Sisi on Wednesday. The list was featured in the official state paper and included Al Jazeera journalists Mohamed Fahmy and Baher Mohamed.

The release of Salwa Mehrez, who was part of the Itihadiya Presidential case, was halted due to the misspelling of her name in the presidential pardon document. Lawyers reported she failed to come out of prison where her parents were waiting for her because prison authorities are insisting on “correcting the mistake on the document” first.

This was not the only mistake in the document, as the name of released Alexandrian poet Omar Hazek, who was imprisoned alongside with activists Mahienour El-Massry and Loay El-Kahwagy, featured on the list twice.

“Indeed, mistakes such as Mehrez’s misspelled name are the reason behind the delay in her release. Unfortunately, all those issues will remain pending until Monday, after holidays,” Khaled Abdel Hamid, coordinator of Freedom for the Brave told Daily News Egypt Thursday.

Meanwhile, the Interior Ministry refused to release Mohamed Hossam ‘Kalousha’ and Mamdouh Gamal, who were convicted in the Shura Council case, because of their involvement in another “internal dispute” case. The case was filed against them while they were inside prison, after they reportedly had a dispute with an officer in jail.

According to a lawyer at the Association for Freedom of Thought and Expression (AFTE), Mokhtar Mounir, the internal case does not require that they be detained. Abdel Hamid also said that they had presented all legal guarantees that the defendants would continue to attend trial sessions if released, but their requests were denied.

Mounir further reported that Mansoura female students Menna Mostafa and Abrar Alaa were also featured on the pardons’ list but were not yet released.

On another not, newly released Omar Hazek wrote a letter to his detained friend Loay El-Kahwagy in which he said: “Dear Loay, this is not my happiest Eid holiday, it is the toughest. I will always think of you and inform people about the suffering you’re enduring.”

“I will inform about the 18 sqm prison cell located in the desert, with its little dirty bathroom, where 25 to 28 prisoners are stuffed, under August’s unbearable heat, prevented from fans and from everything else, unlike criminal prisoners and drug dealers who were better treated,” Hazek wrote.

Although granting pardons is in the hands of the president, their execution remains in the hand of the Interior Ministry.