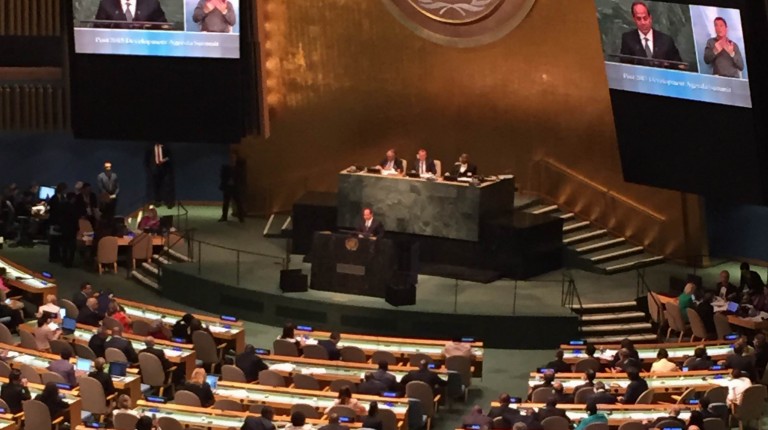 Egypt is concerned, as the tools available for development are not commensurate with the level of ambition and existing challenges, President Abdel Fattah Al-Sisi said during a speech at the United Nations Sustainable Development Goals (SDG) summit Friday.

The Millennium Development Goals (MDG) agenda, which was adopted by the UN since 2000, officially came to an end on Friday. During the SDG summit held on Friday at the UN headquarters in New York, a new set of 17 goals was adopted over the upcoming period until 2030, targeting a wider range of global issues, such as climate change and energy. The summit was held in presence of delegations from at least 190 countries.

“The international community needs to deal effectively with other challenges which hinder development, such as terrorism, which has become an international phenomenon, not just within the Arab countries,” he said.

According to Al-Sisi, Egypt has been working hard for the past three years to prepare for the SDG agenda. He further highlighted the inauguration of the New Suez Canal in August as one of Egypt’s investments achievements.

After his speech, Al-Sisi is expected to hold bilateral talks with the Prime Ministers of India, Croatia and Mali.

Presidential Spokesperson Alaa Youssef said, during a short briefing on Thursday night, that Schwab reviewed the progress made by Egypt since the 2014 forum held in Davos, and noted that Egypt was put in a higher rank in the competitiveness report, which is one of the forum’s outcomes.

A regional economic forum is scheduled to be held in Egypt next May in Sharm El-Sheikh in partnership with the WEF. During the meeting, Al-Sisi discussed preparational procedures for the forum with Schwab.

UN Secretary General Ban Ki-moon said, during his opening speech at the SDG summit, that some countries have already adopted the 2030 agenda in their national strategies, but “nobody can succeed alone”.

He urged all parties to work together, engage with civil society, and listen to feedback from academics, and to move towards a data revolution. Furthermore, he highlighted that all parties must “get to work straight away”.