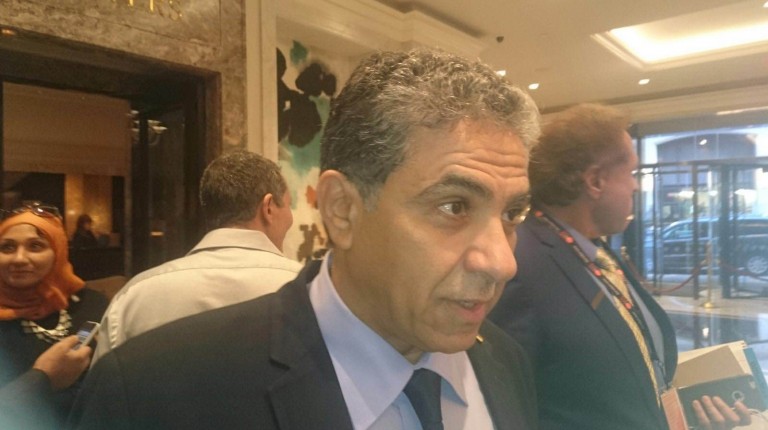 President Abdel Fattah Al-Sisi  arrived in New York City on Thursday, leading a delegation of ministers to participate in the 70th session of the United Nations General Assembly.

Minister of Environment Khaled Fahmy told Daily News Egypt upon arrival: “Climate change is among the top issues to be discussed during the upcoming sideline meetings, in preparation for the upcoming climate change summit in Paris this December.”

The Millennium Development Goals (MDG), which have been adopted by the UN since 2000, will come to an end on Friday. During the Sustainable Development Goals (SDG), a new set of 17 goals will be adopted until 2030, including a wider range of global issues, such as climate change and energy.

“We have been discussing this agenda for over a year now with many other countries so tomorrow will be just adoption for what we already agreed upon.”

According to Fahmy, there will be a meeting with African leaders, led by President Al-Sisi, to review the latest progress on issues related to the environment and climate change .

A report will presented by Egypt to review its progress in this regard, and what it has presented to other African countries, Fahmy said.

“The renewable energy initiative, and the climate change adaptation initiative, are among the two main things Egypt presented to African countries in this regard,” Fahmy added.

He further explained that these two areas were overlooked and not previously tackled, so Egypt saw the need to fill those gaps.

Among the delegation was also the newly appointed Minister of International Cooperation Sahar Nasr. She said, upon arrival, she is planning to meet with World Bank Leaders, among other international organisations, to strengthen the cooperation for development between Egypt and other countries.

“Egypt has made great progress in several pillars of the MDGs, such as women empowerment,” she told Daily News Egypt.

According to a United Nations Development Programme report published in May, Egypt has achieved target 1 of the MDGs, which is reducing extreme poverty up to half.